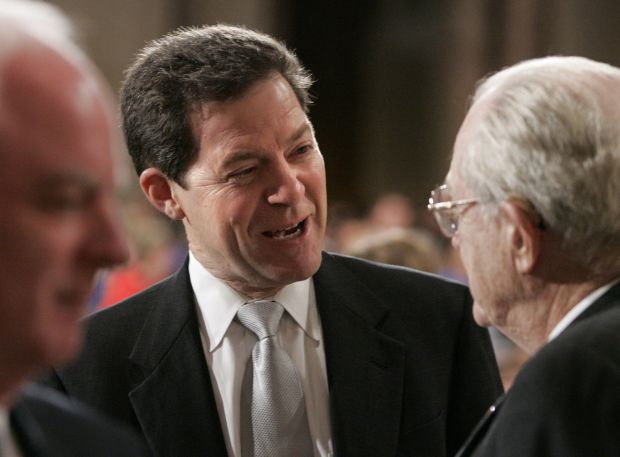 U.S. Sen. Sam Brownback, R-Kan., talks with people before the start of the vigil Mass for life at the Basilica of the National Shrine of the Immaculate Conception in Washington in this Jan. 21, 2008, file photo. (CNS photo/Paul Haring)

FORT WASHINGTON, Md. (CNS) — A bill to repeal the death penalty and replace it with a sentence of life without parole is currently making its way through the Kansas Legislature.

Kansas Gov. Sam Brownback told Catholic News Service that he will “see what’s actually in the bill” before making any decision on whether or not to sign it, should it pass both chambers.

“I am opposed to the death penalty in cases other than where you cannot protect the society from the perpetrator,” he said in an interview Feb. 28, “but the bill is not currently drafted as I’ve explained it just now.”

He spoke to CNS while he was attending the Conservative Political Action Conference, held just outside Washington.

Brownback, a Catholic, is a former U.S. senator who was elected governor in 2010. In 2014, he received an official endorsement from National Right to Life, who cited his “commitment to strengthening a culture of life.”

The use of capital punishment in the United States received nationwide and global attention in May after the botched execution of Clayton Lockett in Oklahoma left him whining, groaning and convulsing for 43 minutes after being injected with a previously untested mixture of drugs. Lockett was convicted of murder, rape and kidnapping in 2000.

On Feb. 19 of this year, Princeton professor and fellow Catholic Robert P. George issued an open letter to the Republican governor urging him to get behind H.B. 2129, as it is called, writing: “It is my understanding that Kansas is considering legislation to forbid certain abortions or abortion procedures, such as those that dismember children in the womb late in gestation.

“I think it would be salutary if in 2015 Kansas would achieve this highly commendable goal while also replacing the death penalty with the punishment of life in prison for heinous murders.”

On Feb. 11, Archbishop Joseph F. Naumann of Kansas City joined the heads of the Lutheran, Episcopal, United Methodist and Mennonite churches in presenting state legislators with a letter calling for an to end capital punishment signed by more than 430 religious leaders.

Kansas enacted its current death penalty law in 1994. But Brownback reminded CNS that “we haven’t had an execution in Kansas” since 1965, when convicted murderers George York and James Latham were put to death.

There are currently nine men on death row in the state but their executions are not imminent. H.B. 2129 bill would not apply retroactively, stating, “No person shall be sentenced to death for a crime committed on or after July 1, 2015.” It also substitutes the term “aggravated murder” for “capital murder,” cases that currently allow for the death penalty to be imposed.

“Aggravated murder” is defined as the “intentional and premeditated killing of any person” in commission of various crimes, including kidnapping and rape.

Even secular voices from within Brownback’s own political movement have spoken about the repeal of the death penalty in the Sunflower State.

Marc Hyden, advocacy director for Conservatives Concerned About the Death Penalty, told CNS that “with the way the criminal justice system is now, we have a very viable option, which is life without parole.

“With the death penalty, you have a system to execute those found to be guilty. Those systems are open to corruption and abuse, like all other human systems, and innocent lives can fall through the cracks.”

“No matter how heinous someone’s crimes may be,” Hyden concluded, “you have to ask yourself if you fully trust the state to administer this (the death penalty) fairly, properly and efficiently.”

Other opponents of capital punishment often cite the fact that life without parole is less expensive than execution while providing the convicted with a chance to change their life. According to a 2014 report from the Kansas Judicial Council, costs for death penalty trials in Kansas were, on average, 400 percent more expensive than those where the death penalty was not sought.

The Catechism of the Catholic Church teaches that “assuming that the guilty party’s identity and responsibility have been fully determined, the traditional teaching of the church does not exclude recourse to the death penalty, if this is the only possible way of effectively defending human lives against the unjust aggressor.”

St. John Paul II, in his 1995 encyclical “The Gospel of Life,” wrote that “(punishment) ought not go to the extreme of executing the offender except in cases of absolute necessity: in other words, when it would not be possible otherwise to defend society. Today however, as a result of steady improvements in the organization of the penal system, such cases are very rare, if not practically nonexistent.”

When asked how his Catholic faith affects his actions on such things as the death penalty, Brownback responded, “I know the struggles that I have. What I think is that Catholic thought provides a nice, solid framework that’s been well thought out through centuries. That’s why I think it’s something that a lot of people should look at broadly for guidance on a society.”

H.B. 2129 was introduced Jan. 27 and referred to the House Committee on Appropriations Feb. 26.