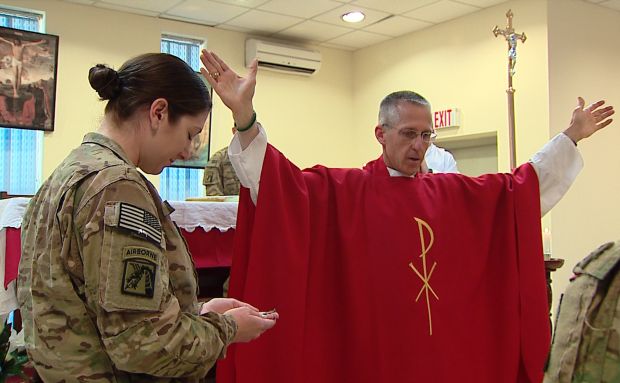 WASHINGTON (CNS) — Father Paul K. Hurley, a priest of the Archdiocese of Boston and a military chaplain for about 15 years, was confirmed March 27 as the U.S. Army chief of chaplains in a voice vote by the U.S. Senate.

With the appointment comes a promotion in rank from colonel to major general. Father Hurley, in a March 30 telephone interview with Catholic News Service, said he expected the formal promotion and installation ceremony to take place sometime in May.

He will become the Army’s 24th chief of chaplains. He will succeed Msgr. Donald L. Rutherford, himself a major general in the Army and a priest of the Diocese of Albany, New York, who will soon retire after serving in the post since 2011.

Father Hurley, who said he’s usually called “Chap” — short for “Chaplain,” especially to non-Catholic Army personnel — is not only a graduate of St. John’s Seminary in Boston, but also of the U.S. Military Academy at West Point, New York.

“After doing some time in a parish up in Boston, it was kind of mutual thing that I eventually came back to the military as a chaplain,” said Father Hurley, who was ordained to the priesthood in 1995.

Father Hurley currently serves as the command chaplain for the 18th Airborne Corps at Fort Bragg, North Carolina, and talked to CNS from Fort Bragg. During the interview, another cellphone of his rang. “That’s my life right now — phone calls, emails, trying to get myself moved along,” he said.

The nomination process for his upcoming position is quite extensive, Father Hurley said. “There’s a board that makes selection and then that selection is vetted through a whole series of channels, and then eventually there was a point in time where I was aware of what was going on,” Father Hurley said. “But it’s still not a done deal until the nomination is completed and then it’s sent over to the Senate for confirmation. … I didn’t know too much previous to that nomination coming up.”

Father Hurley’s previous chaplain assignments include deployments to Iraq and Afghanistan — the latter where Archbishop Timothy P. Broglio, head of the U.S. Archdiocese for the Military Services, met him last year during Holy Week — as well as numerous stateside assignments as an Army chaplain.

“He is both a fine priest and an excellent leader,” Archbishop Broglio said in a March 28 statement.

Both Father Hurley and Msgr. Rutherford serve with endorsement and faculties from the military archdiocese.

Father Hurley said he’s eager to get to Washington so he can get the lay of the land. “To be honest, I really need to get up to the headquarters and find out more about what’s going on overall in order to do some sort of assessment in that sense,” he added. “Chaplains, no matter what time, or what period, or what rank — or garrison or deployed — we’re here to take care of soldiers and families.”

In his spare time, Father Hurley told CNS, “I’m a pretty devout Boston sports fan. That usually occupies any of my free time — following the Bruins or Red Sox or Patriots or whatever.”

PREVIOUS: Bishop: Marriage sacrament allows man and woman to carry out God’s will

NEXT: Pence stands by Indiana law; critics say it discriminates against gays