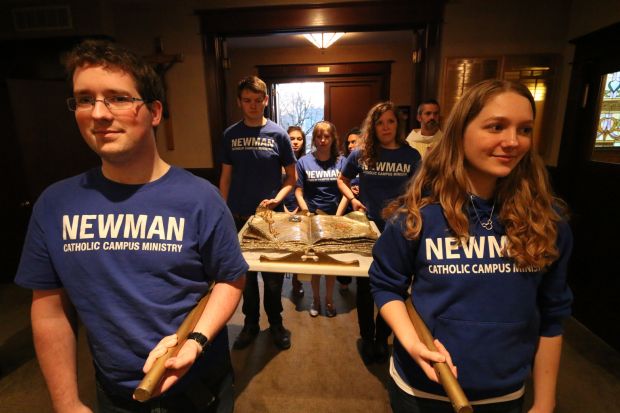 PORTLAND, Ore. (CNS) — The moment before he helped carry a small vial of St. John Paul II’s blood, Justin Waldron, 22, gently touched the relic in a moment of silent prayer.

Catholics of all ages filled churches in Oregon to pray to God in the presence of the blood of one of the church’s newest saints.

Worshippers have asked for the intercession of St. John Paul, who had a special place in his heart for youths, families and older people. He established World Youth Day.

He told the Catholic Sentinel, newspaper of the Archdiocese of Portland, that the fact “a now-canonized saint was alive” during his own lifetime is “inspiring to see.”

At the first stop for the relic during its recent tour in Oregon — St. Stanislaus Parish in North Portland — the first several dozen people in the church awaiting its arrival were 20-somethings, many from the regional Catholic campus ministry based at Portland State University.

Before long, the old guard arrived, many of them Poles and Polish Americans who have a special devotion to their countryman, the only Polish pope.

“The love that he had for students and young people was really inspiring,” said Emily Kunkel, a 24-year-old student working on master’s degree in social work at Pacific University in Forest Grove, Ore. St. John Paul was the pope of her youth and a favorite of her Polish-American family.

“Some people think young people just care about technology and cellphones and partying,” Kunkel explained. “The fact that he had so much faith in what we could do as young people is really beautiful.”

Suzy Maurer, a 21-year-old Portland State University music education major, said visiting the relic made her feel as though she were meeting the saint.

“His name is going to go down in history, not just as pope but as this incredible saint of the youth,” Maurer said. She wants to spread word of his teaching on being pure and honorable, which she says is still relevant.

“I am grateful to St. John Paul because we have so many guests here,” said Father Piotr Dzikowski, pastor of St. Stanislaus.

The Archdiocese of Portland and Florida-based Sisters of the Pierced Hearts of Jesus and Mary invited Catholics to take part in the visitation of the relic to western Oregon.

It was at St. Stanislaus March 9, then was taken to St. Cecilia Church in Beaverton the morning of March 10. Hundreds came to venerate and pray for the saint’s intercession. People of all kinds of nationalities arrived, as did children from St. Cecilia School.

The relic then moved on to a local shrine for the afternoon and evening of March 10. On March 11, it was at two more parishes, where youths also made up a large part of the congregation.