U.N. looks at how women create a better world 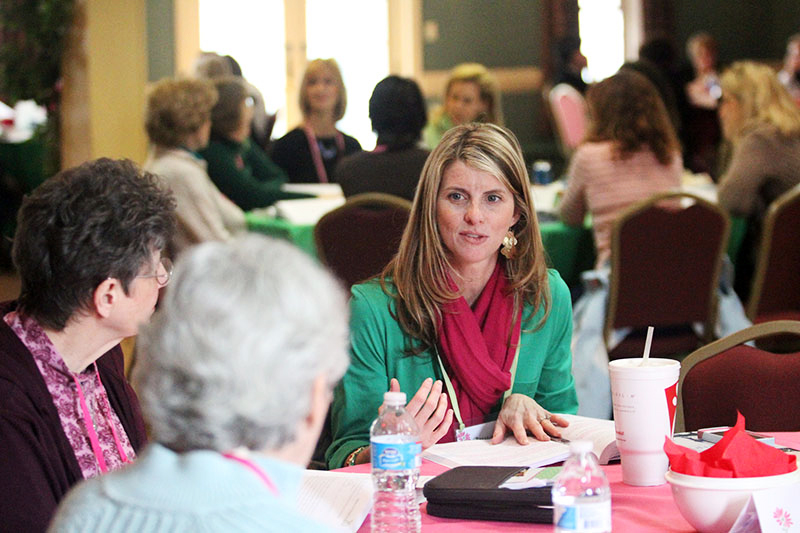 UNITED NATIONS (CNS) — As he opened a March 18 forum on Women Promoting Human Dignity, Archbishop Bernardito Auza said that “in the education of the heart, women are the world’s professors.”

The Holy See’s permanent observer to the United Nations said women have a “special brilliance” to care for the intrinsic dignity of all people, nurture others’ gifts and create a better world. This “feminine genius,” so named by St. John Paul II, manifests itself as solidarity with the vulnerable and the ability to see the dignity of each individual.

“Whenever we speak about human dignity, we are referring to the intrinsic worth of every person, no matter how young or old, rich or poor, strong or vulnerable, healthy or sick, wanted or undesired, economically productive or incapacitated, worldly influential or insignificant,” Archbishop Auza said. “Every human person has such an intrinsic worth that our only fitting response is love.”

The event was sponsored by the Vatican mission to the United Nations and was held in conjunction with the 59th session of the U.N. Commission on the Status of Women March 9-20.

Archbishop Auza said the purpose of the forum was to “shine a spotlight on women promoting human dignity and extol the often-unheralded efforts and achievements of the multitudes of women who do.”

Sister Norma Pimentel, a Missionary of Jesus, told harrowing stories of her work with immigrants in south Texas. She is the executive director of Catholic Charities of the Rio Grande Valley in the Diocese of Brownsville.

She said she was “chosen to be a voice for those in our midst who find themselves dehumanized, suffering atrocities and hardships, as they flee their violent and fearful countries in search of a better life for their children.”

Sister Pimentel said U.S. Border Patrol facilities were overwhelmed during a surge of immigration last summer. She was “ripped” with pain on her first visit, when she saw frightened, exhausted mothers and children packed into cells “like sardines.”

“We prayed together, as we also cried together,” she said. The unexpected result was a heartfelt comment from a Border Patrol officer who said, “Sister, thank you for helping me to see they are human. We have become hardened with the thousands of children that keep coming.”

Sister Pimentel urged prayers for the officers and myriad volunteers to stay strong in their efforts to uphold human dignity. Quoting her mentor as a young sister, she said, “We should always stand for what we say we believe!”

Former Prime Minister Michele Pierre-Louis of Haiti, who is founder and president of the Foundation for Knowledge and Liberty, traced the history of women’s rights in her country from the 1930s. She said breakthroughs in gender equity were possible because pioneer women tenaciously believed “women’s role in society could not be limited to bearing and raising children at home.”

Pierre-Louis was a national trainer in a church-sponsored literacy program and subsequently opened a foundation that worked successfully to reduce violence and discrimination against women.

“My own experience as prime minister taught me there is still a long way to go,” she said. “Though under constant threats and sexist derogatory comments, I believe I was able to demonstrate that a woman can lead a government and gradually make some notable changes in leadership and in some legal apparatus,” she said.

Despite major disasters and other setbacks, Pierre-Louis said, “There are pockets of hope among people of faith and dignity.”

“One of the most difficult things we have to deal with is seeing and understanding the other. The more we open our eyes to look, feel and love, the more we’ll avoid conflicts,” Pierre-Louis said.

She encouraged members of the Haitian diaspora to write letters and send petitions to the Haitian government to put pressure on the police to stop recent unprecedented violent attacks against the Catholic church.

Carolyn Woo, CEO and president of Catholic Relief Services, said her organization focuses on integral human development. “We have to serve everyone and serve the whole person,” she said.

The CRS approach to gender equity seeks to provide men and women with equal opportunities through holistic programs that address the root causes of poverty, she said. “Solutions are seldom single-dimensional.”

“Our work must be transformative and sustainable and it must empower local communities,” Woo said. In addition, it must be accountable.

Woo said CRS, the U.S. bishops’ overseas relief and development agency, supports a member-owned “savings and internal lending community” in Kenya that uses a contemporary version of traditional “micro-saving circles” to give men and women risk-free access to cash they accumulate as a group. “In seven years, we reached 1 million people who saved $10 million,” she said.

Magalie Dresse, owner of Caribbean Craft Haiti, employs more than 120 artisans who produce export-quality sustainable crafts for retailers in the U.S. and Europe. “Every person with a job supports an average of seven other relatives,” she said.

Dresse said she encouraged women to join her company because they have an eye for quality, the passion to make a perfect piece, and they are responsible and stable.

Caribbean Craft Haiti also helps its employees access nutrition, literacy, numeracy and banking programs. “We understand the role we have to play in our country and we dare to go that extra mile,” Dresse said.

At the event, three young women from Mexico described the roles women fill in politics, education and society. The challenge for young women is to humanize society, they said.