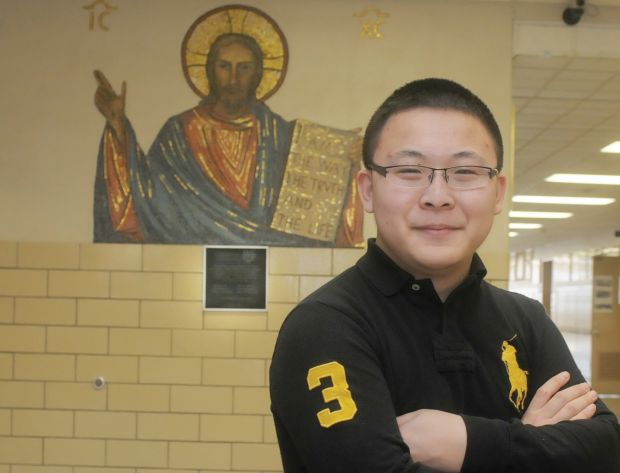 Peter Yang, 18, a senior at Cathedral High School in St. Cloud, Minn., who is going through the Rite of Christian Initiation of Adults tobecome a Catholic at the Easter Vigil, poses for a photo Feb. 8. (CNS photo/Dianne Towalski, The Catholic Spirit)

All of these are good questions that anyone considering becoming Catholic might ask.

But the questions are even more poignant when they come from a young man who grew up in a place where the government told him that God cannot mutually exist with science, where one who believes in God is considered weak, and where the only media coverage of the Catholic Church is around abuse scandals.

If this is your background, it’s challenging to talk about God at all.

For 18-year-old Peter Yang, who is from Beijing and is a senior at Cathedral High School in St. Cloud, these were among the questions he had. But thanks to his own curiosity and the support of the school, Yang began a journey to full initiation into the Catholic Church through the Rite of Christian Initiation of Adults program.

He will become a Catholic at the Easter Vigil, April 4, as will thousands of others across the United States.

“I was taught that God did not exist,” he told The Visitor, newspaper of the Diocese of St. Cloud. “I didn’t believe in the church’s teaching. I considered church a place where they were gathering people’s money and taking advantage of it.”

Yang plans to return to China this summer and said he believes his parents will be supportive of his decision to become a Catholic.

For him, living his faith “on the inside” will help him through the difficulties he may face “on the outside.”

The Easter Vigil marks the culmination of RCIA, a process of conversion and study in the Catholic faith for catechumens, those who have never been baptized, and for candidates, who were baptized in another Christian denomination and want to come into full communion with the Catholic Church.

The catechumens receive baptism, confirmation and first Communion at the Holy Saturday services, while the candidates make a profession of faith, are confirmed, if they have not already been confirmed, and receive the Eucharist.

Catechumens and candidates are formally presented to the local bishop during the Rite of Election and Call to Continued Conversion, which this year took place either the last weekend of February or first weekend of March.

According to the 2014 Official Catholic Directory, there were 39,654 catechumens and 66,831 candidates in 2013, the most recent year for which this data is available.

In Brooklyn, Bishop Nicholas DiMarzio prayed for the perseverance and strength of the men and women as they entered the final stage of their journey to be members of the diocese. He told them the devil would continue to tempt them, just as he did Jesus in the desert. He said the works of Satan include the 4 “Ds”: deception, division, diversion and discouragement.

Ted Musco, Brooklyn’s diocesan director of faith formation, said that many times people think that great numbers are leaving the Catholic Church and are not aware of those joining.

“More and more people want to get involved,” said Musco told The Tablet, the diocesan newspaper.

For some individuals who will be received into the Catholic Church on Holy Saturday, the event will be a family affair — literally.

In the Diocese of Sioux City, Iowa, Heather Badar and daughter Isabella “Bella” will receive their first Communion April 4.

Heather and her husband, Tracey, were raised by parents who had a strong faith in God and were committed to their religion — Heather as a Missouri Synod Lutheran and Tracey as a Catholic.

“Over our 17 years of marriage, we have been active member of three Lutheran churches,” Heather explained. “We have also attended Mass at Catholic churches on holy days, when visiting relatives, and with our large group of friends who are also Catholic.”

Heather found herself drawn to the reverence of the Mass and the discussion would often surface about embracing membership in a Catholic church.

“My biggest fear was the classes I knew I would need to take to convert,” she told The Catholic Globe, the diocesan newspaper.

But what Heather discovered was that RCIA became the biggest faith journey of her life.

“I have learned about the Catholic faith, but more so I have learned about my relationship with Jesus,” she said. “I went through confirmation and professed my faith as an eighth grader and I have always had a relationship with the Lord, but going through this process again as an adult, when it is my choice and God’s will driving me to once again profess my faith, has a much deeper meaning.”

When she was just a few weeks away from becoming a member of the Catholic Church, 27-year-old Tina Saviano from St. Maria Goretti Parish in Madison, Wisconsin, called preparing for that moment “the best thing ever.” “I love it. I can’t get enough,” she told the Catholic Herald, Madison’s diocesan newspaper, about RCIA.

It has been a lifelong journey to the church for Saviano.

After being baptized a Lutheran as a child, her life took many turns through foster homes, exposure to many faiths, but no consistent participation in any faith.

“I knew that faith has always been in my heart,” Saviano said.

After graduating from high school, she wanted to be part of a church again, but kept putting it off.

She found new challenges in her early and mid-20s after a marriage that ended, and now being a single mother to two children, a daughter and son, ages 3 and 1, respectively.

Prior to finding the Catholic Church, her “life was spinning out of control,” as she put it.

In the Diocese of Salina, Kansas, both Lien Tran and Andrew Hecker said they have found a home in the Catholic Church.

“It felt like God had his hands in this. It just came naturally, as if it were meant to be,” Tran told The Register, Salina’s diocesan newspaper.

She became a Catholic two years ago as part of the Rite of Christian Initiation of Adults. Her fiance, Andrew, will follow suit this year. Hecker will be among 190 individuals formally joining the Catholic Church in the Diocese of Salina.

Boley told The Catholic Missourian, the diocesan paper, that his parents were Christian missionaries in Brazil and raised him with a deep spiritual devotion, appreciation for the Bible, and a keen vision for mission and evangelism. But he also learned to believe that Catholics do not go to heaven.

But he now sees that God had been calling him to be Catholic at least since he was in college.

In the Diocese of Salt Lake City, CaLee Przybylski, her husband and four children will be among those being baptized into the Catholic Church at the Easter Vigil. It will be the final step in a journey that began when she was a child, resettling in Utah with her parents and siblings, refugees from Laos.

Her family practiced Buddhism and would go to the Buddhist temple for special occasions, “which was fine, but I didn’t feel that I had the guidance that I needed because there’s no teaching,” Przybylski told the Intermountain Catholic, the diocesan newspaper.

Instead, she felt a connection with God. Some years after living in Colorado, where she started RCIA classes but was unable to finish, she returned to Utah and found a spiritual home at the Cathedral of the Madeleine. When she started going to Mass, she invited her children to join her. They did, and “my oldest daughter told me that when she entered the cathedral she had this feeling that she knew that it was right path,” Przybylski said.

Then her husband, Edward, then sat in on an RCIA class and later joined the program.

In the Diocese of Wilmington, Delaware, the RCIA group at St. Elizabeth Ann Seton Parish in Bear includes people from a variety of nationalities, including Vietnamese and Latin American.

That diversity might be attributable to the amount of starter housing around the parish, Father Roger DiBuo, the pastor, told The Dialog, the diocesan newspaper.

“This is a place for immigrants to get a foothold to move more deeply into our society,” he said.

As they do that, securing jobs and homes, often their faith life suffers. Many of them have moved several times trying to support their families. When they finally get settled, Father DiBuo said, many seek to get themselves and their children back into the faith.