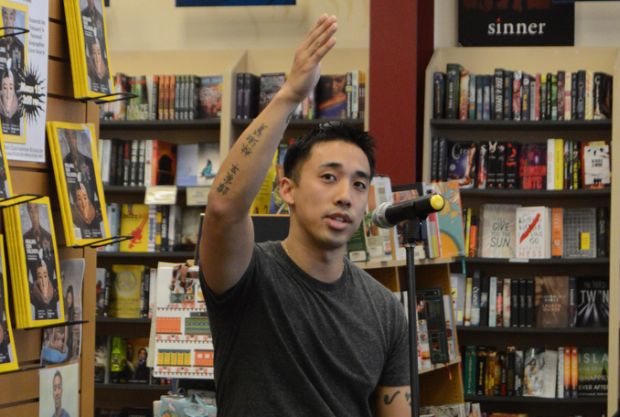 OAKLAND, Calif. (CNS) — Twice before, Aaron Tam has come close to being baptized.

Once was in Jacksonville, North Carolina, but in preparing for his deployment to Iraq, he missed too many classes.

His instructor in the Rite of Christian Initiation of Adults program, himself a retired Marine Corps sergeant, gave him the bad news: “You can’t get baptized this Easter.”

“I said, ‘I totally understand,'” he recalled. He left that May for Iraq.

Another time, he prepared aboard ship, working his way over to deployment. That effort came up short as well. Duty called.

Come Holy Saturday, April 4, his service to his country completed, now-retired Marine Sgt. Aaron Tam, expected the only call he’d hear to come from the Lord.

He is one of the 349 people to be baptized at the Easter Vigil at Masses throughout the Diocese of Oakland. An additional 279 people will be received into full communion the church.

Tam will receive the sacraments of initiation at St. Joseph Basilica, the Alameda parish he calls “home.”

“Every time we would come home on leave, we would always come to St. Joseph Basilica,” he told The Catholic Voice, newspaper of the Oakland Diocese. Often the leave would come in late December. “We always go to midnight Mass. It’s home to us.”

As the Easter Vigil approached, “I’m excited and nervous all at the same time,” said Tam, 31. “I’m excited because the journey’s not over. It’s just beginning.”

His RCIA leaders’ words have made their mark. “The best words that hit home to me were: When you get baptized, it’s a blessing, but it also comes with a great responsibility.”

He had been thinking the same thing. “It doesn’t stop there,” he said. “I wonder what’s going to happen after the RCIA program.”

Going to Mass once a week will not be enough, he said. He looks forward to becoming involved in ministries. Some parishioners cook at the Midway Shelter in Alameda; Tam said he thinks he and his wife, Angela, will become involved in that, too.

Before the Easter Vigil, Aaron and Angela Tam, who were married civilly seven years ago, have a date at the altar to have their marriage officially recognized by the Catholic Church — a process called “convalidation” in church law — at St. Joseph Basilica.

Giving back is hard-wired in Aaron Tam, father of a daughter and a son, and fitness trainer settling into life in his hometown.

He was a high school senior — honor student, student athlete and battalion commander of the Junior ROTC — when he walked into his Advanced Placement English class on 9/11 to see images of the World Trade Center on the television screen.

That spring, he was accepted to four colleges, but he didn’t want to get loans and “didn’t want to be a burden on my parents,” he said.

He made this decision: “I’m going to join the Marine Corps.”

Working security for Explosive Ordnance Disposal, he was 10 feet from a device when it detonated.

“When I came to, I thought I was knocked down,” he said. “My vision was going in and out.”

But he could see his exposed kneecap and femur.

“They are miracles, if you think about it,” he said. “I was bleeding out so bad they said, ‘You might not make it.’ Someone’s watching out for me.”

Flown to Baghdad by helicopter, he waited for a neurosurgeon to arrive from Germany to repair his damaged brain. His next memory was waking up in the ICU. His speech was garbled, his left arm dangled, his legs didn’t move, but his right hand worked.

He spent the next year and a half recovering. “I was 20 at the time,” he said. “You want to get back up. “Getting back up” meant training to become an Explosive Ordnance Disposal technician, which led to 12 more years in the service. “It was hard on my family, my kids, my wife,” he said.

“I think it was God’s plan for me to have my kidneys fail, because I never would have gotten out on my own,” said Tam, who retired after two episodes of kidney failure.

In the course of his medical retirement, Tam went to the National Intrepid Center of Excellence in Bethesda, Maryland, where he met art therapist Melissa Walker. She gave the wounded service members a plain mask and provided materials for them to personalize them.

Tam’s mask portrays his injuries: a bone flap rises on the left side, exposing his left frontal lobe, left atrophied by his blast injuries. Pieces of metal dot his face, representing the shrapnel embedded there.

A photograph of Aaron Tam, in his Marine dress blues wearing the mask, appears on the cover of the February 2015 issue of the National Geographic.

Tam’s journey has been more than a decade in the making. “I wanted to become Catholic,” he said. “I thought about it when I was in boot camp — this was before I met Angela — but I didn’t really know much. That’s not the time you start asking questions.”

The desire to become Catholic stayed with him “as the years went by,” he said.

“You don’t have to be religious, but if your life is in danger, you’re going to start believing in something real fast.

“Right then and there, I knew that’s what I wanted to do,” he said. “I wanted to go toward Catholicism. I like the community. It’s one thing to be Christian, to be Catholic, the community is tighter.”