Deacon Radetzky, mentor of other deacons, dies at 92 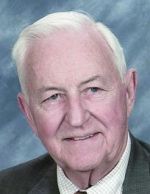 Deacon William R. Radetzky, 92, a retired permanent deacon, died March 23. He was ordained in 1986 as a member of the Archdiocese of Philadelphia’s first class of permanent deacons not representing a specific ethnic community.

The son of the late Charles William and the late Elise (Bloomberg) Radetzky, he attended Carnell Elementary School, Wilson Junior High School and Frankford High School and served during World War II in the United States Army Air Corps. He then attended Peabody College, Nashville, Tenn., and later the Wharton School of the University of Pennsylvania. He entered the brokerage industry in what is now Janney, Montgomery Scott from which he retired as a senior vice president in 2005.

He was married to the late Angela Anne (Amicone) and was the father of three daughters, Carol Pineo and also Lise Anne Sweeney and Susan, who are both deceased.

He was ordained a permanent deacon by Cardinal John Krol on May 25, 1986 and was assigned to his home parish, Epiphany of Our Lord in Plymouth Meeting, where he served until his 2011 retirement.

“I came into the parish in 1996 and Bill was one of the first to suggest I enter the deacon program,” said Permanent Deacon Michael Pascarella Jr. “Bill grounded me and was a father figure to me.”

During Deacon Pascarella’s formation Deacon Radetzky would invite him to accompany him for whatever he was doing. Later “he would remind me who taught me,” he said.

Deacon Pascarella last visited Deacon Radetzky on March 4, and before he left, “He asked me to give him my blessing which I did, and then he asked if he could give his, which he did.”

Connie Steuer, who is director of music ministry at Epiphany, remembers it was Deacon Radetzky who hired her. After her audition he took her to lunch and told her she had the job and could start immediately. When she said she could start Sunday and not Saturday because of a planned wedding, he replied, “See you at nine o’clock Sunday.”

“He as a pillar of Epiphany,” Steuer said. “He and I worked together and

he was involved in so many ministries. He was a wonderful man and encouraged me in my ministry. He brought a sense of his business background to the Church and he knew how to influence people.”

The reception of the body will be held Friday, March 27, at Epiphany of Our Lord Church at 9:15 a.m., followed by a viewing and 11 a.m. Mass celebrated by Bishop Robert P. Maginnis.

The homilist and deacon assisting at the liturgy will be Deacon David B. Schaffer, a fellow member of the class of 1986; Deacon Pascarella will be the deacon assisting at the altar. Concelebrants of the Mass will include Msgr. Joseph Gentili and Fathers Joseph Quindlen (pastor of Epiphany Parish), Richard McAndrews and James Kelly.

In addition to his daughter, Deacon Radetzky is survived by two grandsons, Jonathan Pineo and Christopher Tomarelli, and one great-grandson.