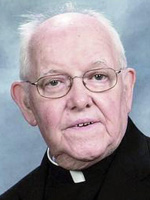 Father Joseph E. O’Brien, 90, a priest for the Archdiocese of Philadelphia for almost 64 years, died March 26. He was born in Philadelphia the son of Irish immigrants, the late Joseph and the late Anna Jane (Taggart) O’Brien.

His mother died when he was 2, and while he initially attended St. Monica School, most of his years as a child and a youth were spent at St. John’s Orphan Asylum. Ordinarily boys at age 11 or so would be passed on to institutions conducted by male religious, but the Sisters of St. Joseph might retain a few at St. John’s, especially if they sensed a religious vocation.

In 1984 he was assigned to St. Leo, Philadelphia, where he truly found a home giving faithful service under four pastors. There he remained for almost 31 years; never mind that he technically retired in 2002. He not only stayed but when the parish combined with Our Lady of Consolation, at the invitation of Father Joseph Farrell, Father O’Brien moved to Our Lady of Consolation Rectory and often celebrated the Sunday Mass at St. Leo, now a worship site.

Father John Farry, who was his pastor for 18 years at St. Leo, said, “Joe would never argue, if you asked him to do something he did it. He was the obedient servant, a good man. Anything people would ask — a house blessing or a sick call — he would do it, and he never asked for anything

or bought anything for himself. What people didn’t know, he had an impish sense of humor. When things weren’t going well at St. Leo he was my anchor.”

Pat Lardon, who worked at St. Leo rectory for 16 years, recalls Father O’Brien as “a good holy man who always had a glint in his eyes; a leprechaun smile, but he could read people very well. He worked so hard, he was a true servant of God. He was glad he was allowed to stay after he retired, because he like the people.”

He was always faithful to his breviary and missal, she remembers, and the last time she saw him he was in Nazareth Hospital and they prayed Noon Prayer together.

After he moved into Our Lady of Consolation, “We got to be very close to him,” said Barbara Thaite, a secretary at the parish, who along with her husband, Mike, would invite Father O’Brien to their Thanksgiving dinner as a member of the family.

“My husband visited him every day in his last week,” she said. “We loved him very much. My memory of him will be his walking slowly up the aisle for Mass, a simple, holy, humble priest.”

As he got older his Masses got longer and he struggled with his homilies, but the people looked past that because they loved him.

“He swore he would never retire and he didn’t,” said Father O’Brien’s niece, Jane Mooney. “In a way it is joyful he really didn’t have to go to the retirement home.” She remembers her uncle as, “humble and loving. He served his God with every ounce of his being.”

Going over his records after he died she was amazed by his personal charity. “He was generous at people in need,” she said. “I think 98 percent of his money quietly went to charities or individuals.”

Father O’Brien’s funeral will be held Tuesday, March 31 at St. Leo Church, beginning with a 9 a.m. Reception of the Body, followed by a viewing, and his funeral Mass will be celebrated by Bishop Michael J. Fitzgerald at 11. Concelebrants will include Msgr. Thomas Kelley, Father Charles Gormley, Father Farry, Father Farrell and Father John Lyons, who will be the homilist.

The Mass will be followed by a luncheon at Our Lady of Consolation Hall.

Father O’Brien is survived by his niece, Jane, and her husband, Patrick Mooney, and great nieces and nephews.

Interment will be at Holy Cross Cemetery, Yeadon, on April 1.

PREVIOUS: Deacon Radetzky, mentor of other deacons, dies at 92

NEXT: Philadelphia priest and Air Force chaplain dies at 85