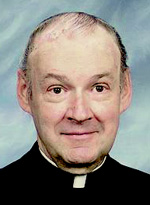 He was ordained May 17, 1969 by Cardinal John Krol at the Cathedral of SS. Peter and Paul, Philadelphia.

His first assignment as parochial vicar at St. Hedwig Parish, Chester, was harbinger of his future career, ministering entirely in Polish personal parishes.

His following assignments were as parochial vicar at St. Laurentius, St. John Cantius and St. Adalbert, all in Philadelphia. In 1986 he returned to St. Laurentius as pastor and remained there for 27 years until he was named pastor emeritus in 2013.

“He loved his priesthood, he loved his parish and he loved his school,” said his sister, Sister of St. Francis Helen Gwiazda. “He was very humble, and whatever he did for his people, he would say, ‘you don’t have to thank me, I’m your pastor and I’m supposed to help you.’”

Within his birth family, “We relied on him, because he had good judgment, and whatever happened he always knew what to say to comfort us.”

Father Edward Kuczynski was just a seminarian visiting his sick grandmother when a priest with a booming voice burst into the room singing ,“Oh, oh, moja droga jocie kocham,” from Bobby Vinton’s “My Melody of Love.” That was Father Gwiazda, and he went room to room, singing and cheering everyone up.

“I was stationed with him for two years at St. Adalbert,” Father Kuczynski said. “He was a humble man, always optimistic, somebody you would want to meet. He was a homebody who didn’t take vacations, he just wanted to be with his people. He was the Good Shepherd.”

A viewing for Father Gwiazda was held on Saturday, March 7 at St. Francis Center for Rehabilitation and Healthcare. Archbishop Charles J. Chaput celebrated his funeral Mass afterward. Among the concelebrants were Msgrs. William A. Dombrow and Daniel J. Sullivan; Father Francis P. Groarke and Father Kuczynski, who was the homilist.

Interment was at Our Lady of Czestochowa Cemetery, Doylestown.

PREVIOUS: Immaculate Heart sister who taught in all grade levels dies at 74

NEXT: Deacon Radetzky, mentor of other deacons, dies at 92