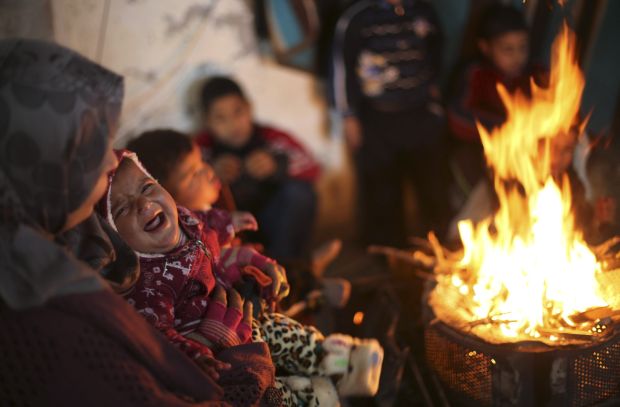 A baby cries as members of a Palestinian family warm themselves by a fire Feb. 20 at the remains of their house that witnesses said was destroyed by Israeli shelling during a 50-day war last summer near Gaza City. Six months after the end of the most recent war in Gaza, one aid official said there is still a "grave humanitarian crisis." (CNS photo/Ibraheem Abu Mustafa, Reuters)

JERUSALEM (CNS) — Six months after the end of the most recent war in Gaza, there is still a “grave humanitarian crisis” in the narrow strip wedged between the Egyptian and Israeli borders, where more than 1.8 million Palestinians live closed off to the world because of an international embargo.

Following a visit to the area at the end of February, Sami El-Yousef, Catholic Near East Welfare Association’s regional director for Palestine and Israel, noted there is an unemployment rate of 70 percent, a high level of debt and little meaningful reconstruction of the buildings destroyed by Israeli bombing during the war.

“One of the most difficult parts of our trip was seeing how much people have lost hope,” he told Catholic News Service March 2. “They really could not see any bright spot at the end of the tunnel; the tunnel does not even exist for them.”

El-Yousef said Gazans told him they feel the situation today is even worse than it was during the war, because then, at least, they had a bit of hope the war would end and things would get better with aid and reconstruction.

But promised financial aid from some Arab countries has failed to materialize largely due to an internal conflict between the Palestinian Authority’s ruling Fatah party and Hamas, which controls Gaza. Tunnels along the Egyptian border, which were used to smuggle cheap goods and fuel to Gazans, have been destroyed by the Egyptian government, which has labeled Hamas a terrorist organization.

Now all goods reaching Gaza come from Israel, with high Israeli prices, making many basics unaffordable for the local population. People are even resorting to buying basic food necessities on credit, but with no prospects of being able to pay off their debt any time soon, said El-Yousef.

“The troubles are so widespread, the general atmosphere is one of anger,” he said. “Anger at everyone: at the Palestinian Authority and Hamas for a lack of reconciliation, at Israel for creating the widespread destruction, at the international community for not doing more to support (Gaza) and at other Arab countries for not following through with their financial commitments.”

The level of tension is very high, he said, with the outlook for the future bleak.

Psychosocial intervention programs play an important role in helping people, especially children, overcome the trauma suffered during the war and deal with the current difficult conditions, he said. Though one such CNEWA project is set to finish at the end of the school year, there have been requests for its continuation into the summer or perhaps to continue at the beginning of the coming school year.

He said children’s drawings from such sessions show images of war: guns and missiles, destroyed buildings and dead bodies drawn in dark colors.

“There was a unanimous call while we were there that we need this to continue. They are worried when the children get out of the psychosocial intervention they will revert to their own war traumas,” El-Yousef said, noting that the project has reached between 10,000-20,000 people. “It is extremely helpful, especially for the children, to get out of the war worries.”

He said he also saw marked improvement in older children’s expression and language during his recent visit.

Catholic Near East supports a scholarship program for Christians, who are not permitted to study at universities in Israel, because Israel does not allow Gazans ages 16-35 to leave Gaza; it says this is to prevent terrorism.

He said the increasing radicalization of Islam in the Middle East is of growing concern not only for Christians, but also for liberal Muslims. Following the terrorist attack in Paris against the satirical French newspaper Charlie Hebdo, Islamic State flags were flown during a Gaza City demonstration in which hundreds of protestors marched through the streets for about 20 minutes, he said.

“It is probably a very small percentage of people, and probably not a great threat today, but we all know how these little pockets start,” he said.

He also said that, in overwhelmingly Muslim Gaza, Christian institutions have earned a new level of respect and appreciation because of the intervention and help they provided during the war.

In conversations, he said, “the names that arose were all Christian: Pontifical Mission, Caritas, CRS, providing aid to all Gazans. They were in the forefront providing services predominantly to Muslims.”

He said he believes Christians must work for more integration into Palestinian society rather than isolation.

Noting that of the 3,000 students studying at the Christian schools in Gaza, at least 90 percent are Muslim, he added: “The openness of the interfaith dialogue that goes on in the schools is not to be underestimated, even if it is only affecting 3,000 children and 3,000 families.”

NEXT: By listening to poor, mission of ‘Guadium et Spes’ lives, cardinal says