Blood of Naples’ patron liquefies during pope’s visit to cathedral 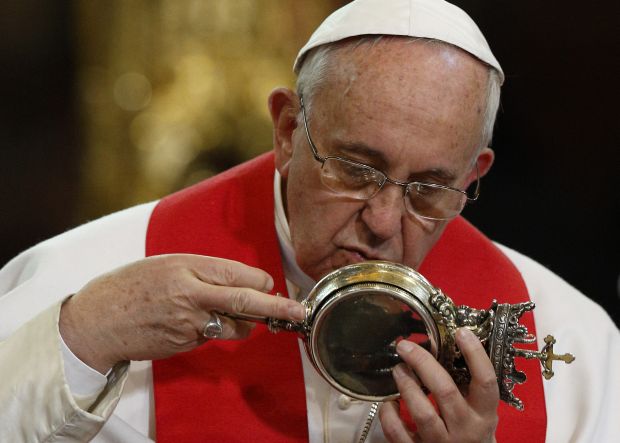 Pope Francis kisses a reliquary containing what is believed to be the blood of St. Januarius during a meeting with religious at the cathedral in Naples, Italy, March 21. The dried blood of the saint is said to liquefy several times a year. After the pope handled the relic, the blood apparently liquefied. (CNS photo/Paul Haring)

VATICAN CITY (CNS) — At the end of Pope Francis’ spontaneity-filled meeting with priests, seminarians and religious in the cathedral of Naples, the vial of dried blood of the city’s patron saint appeared to miraculously liquefy.

After Pope Francis blessed the congregation with the reliquary holding the vial, Cardinal Crescenzio Sepe of Naples announced, “As a sign that St. Januarius loves the pope, who is Neapolitan like us, the blood is already half liquefied.”

The thousands of people present in the cathedral applauded, but the pope insisted on taking the microphone. “The bishop said the blood is half liquefied,” he said. “It means the saint loves us halfway; we must all convert a bit more, so that he would love us more.”

The blood of the fourth-century martyr is Naples’ most precious relic. The townspeople gauge the saints’ pleasure with them by awaiting the blood’s liquefaction three times a year: in the spring during celebrations of the feast of the transfer of the saint’s relics to Naples; Sept. 19, his feast day; and Dec. 16, the local feast commemorating the averting of a threatened eruption of Mount Vesuvius through the intervention of the saint.

When Pope Benedict XVI visited in 2007 and the blood did not liquefy, Msgr. Vincenzo de Gregorio, custodian of the relic, told reporters the miracle had never occurred when a pope visited on a day other than the feast day.

Entering the cathedral, Pope Francis’ white cassock and his arms were yanked repeatedly by priests, seminarians and nuns wanting to touch him or attract his attention.

Calmed reigned briefly after the pope reached the altar, but then Cardinal Sepe told the pope that, in accordance with canon law, he had given formal permission for the nuns in Naples’ seven cloistered convents to go out for the day.

The nuns, who had been seated in the sanctuary, broke free, running to the pope, surrounding him, hugging him, kissing his ring and piling gifts on his lap.

“Sisters, sisters, not now, later!” the cardinal shouted over the microphone to no avail. “Look what I have done,” he said, exasperated. “And these are the cloistered ones, imagine what the non-cloistered ones are like! Ay. They’re going to eat him alive.”

When order was restored, Pope Francis stood with several sheets of paper and told the congregation, “I prepared a speech, but speeches are boring.” So, he put the papers aside, sat down and began talking about how Jesus must be at the center of a consecrated person’s life, about life in community, about poverty and mercy.

“The center of your life must be Jesus,” he said. Too often, people — including priests and religious — have a difficulty with a superior or a confrere and that problem becomes the real center of their lives, robbing them and their witness of joy.

Addressing seminarians, he said, “if you do not have Jesus at the center, delay your ordination. If you are not sure Jesus is the center of your life, wait a while in order to be sure.”

Money definitely cannot be the center of the life of a priest or nun, he said. Even a diocesan priest, who does not take vows of poverty, must make sure “his heart is not there” in money.

The pope told the story of a religious woman he knew in Argentina who was so concerned about raising money for her school that she subconsciously preferred the company of people with money. One day, in the faculty room, she fainted. In the teachers’ attempt to revive her, the pope said, one suggested putting “a 100 peso note” under her nose to revive her, “but the poor woman was already dead and this was the last word said about her when no one knew if she had died or not.”

NEXT: Cardinal: Pope ‘tells it like it is,’ is clear about church’s message