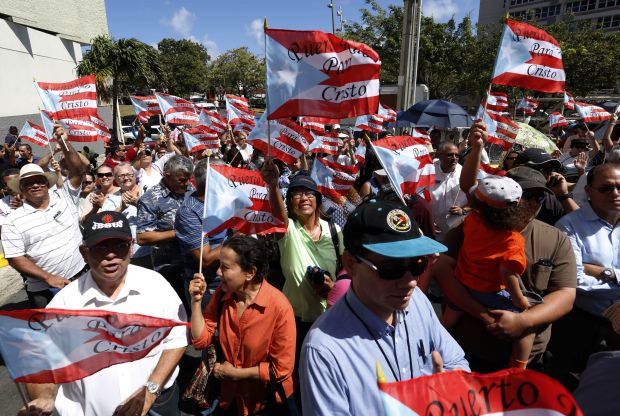 People gather in San Juan, Puerto Rico, March 26 to defend an article of the civil code that upholds marriage as a union only between a man and a woman. (CNS photo/Thais Llorca, EPA)

SAN JUAN, Puerto Rico — A Catholic lay organization has openly challenged on constitutional grounds the moves by Puerto Rico’s Department of Justice and the governor to allow same-sex marriage in this U.S. territory.

“It is clear this position is contrary to the Catholic Church’s teachings and principles espoused by a huge majority of Puerto Ricans,” said a statement released by Alianza. “We lament the governor’s statements untying his religious beliefs from his decisions as a politician to justify his position.”

Alianza was responding to a two-part government statement bringing the same-sex marriage issue back to the political fore March 20.

At a news conference, Justice Secretary Cesar Miranda stated he would not apply existing Civil Code statutes defining marriage as a legal union between one man and one woman.

“Laws defending marriage must respect every citizen’s constitutional rights,” said Miranda. “We have concluded that at present time’s rule of law, it is neither justified nor correct to uphold Article 68’s constitutionality.”

A few hours later, Gov. Alejandro Garcia Padilla, a Democrat who is a practicing Catholic, released a statement supporting Miranda’s written recommendations based on input from the Department of Justice and the Attorney General’s Office.

Citing what he described as deficiencies in the Civil Code, he said his decision came “absent any other valid legal mechanisms before the courts to recognize these (homosexual) couples’ rights. Jurisprudence developments in multiple U.S. jurisdictions point to an undeniable consensus.”

Alianza charged both Garcia Padilla and Miranda were wrong politically and religiously.

“We hold the justice secretary in violation of his ministerial duties to uphold and enforce the commonwealth’s laws,” said Alianza, “because as long as the law is not declared unconstitutional, the secretary has no discretion to stop, arbitrarily, upholding our law.”

With regard to religion, Alianza cited a 2003 document issued by the Vatican Congregation for the Doctrine of the Faith, “Considerations Regarding Proposals to Give Legal Recognition to Unions Between Homosexual Persons”, reaffirming church teaching requiring compassion for homosexuals, but saying legal recognition of same-sex unions is contrary to human nature and ultimately harmful to society.

Alianza quoted the section that states: “If it is true that all Catholics are obliged to oppose the legal recognition of homosexual unions, Catholic politicians are obliged to do so in a particular way, in keeping with their responsibility as politicians.”

According to the 2010 U.S. Census, there are 1.65 million Catholics among Puerto Rico’s 3.75 million Christians. Catholics comprise 44 percent of the total population.

Garcia Padilla’s executive action was not a complete political surprise. He had included same-sex marriage in his agenda when he campaigned in 2012 to be governor.

“I do believe marriage should be between a man and a woman; that’s what I have lived at home, how I was brought up, and what I believe,” he said in a television interview May 12, 2012. “But I have to say there are some rights denied to some people because of the way they practice their intimacy, and I believe that’s wrong.”

An appeal was filed with the federal court after a group of couples seeking recognition of their same-sex marriages performed in U.S. states — or wanting to marry in Puerto Rico — were denied review by the local Supreme Court.

Article 68 of the Civil Code prohibiting same-sex marriage was amended in recent years to include a provision stating that “no recognition will be given to marriages between persons of the same sex contracted in other jurisdictions.”

NEXT: Bishops of Philippines restate church stance against divorce