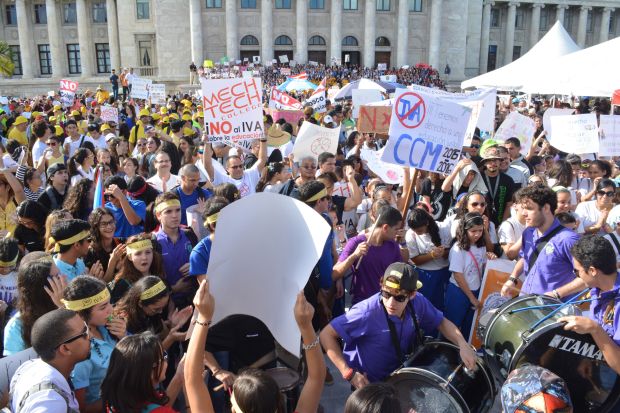 As part of a comprehensive reform of its tax structure, the Puerto Rican government proposes replacing the current sales tax of 7 percent with a value-added system that would amount to a 16 percent tax, which Catholic school officials say would hurt Catholic education particularly, and private education generally, when applied to tuition, lunches, uniforms and textbooks.

Besides consumption, the tax reform is also expected to affect personal income tax and business-related taxes.

“Catholic schools already have been severely affected by recent migration and business and industry closings due to the current economic situation,” Father Juan Santa Guzman, vicar for education at the Archdiocese of San Juan, told Catholic News Service. “If you add 16 percent to that, many of our schools will not survive.”

Unlike a regular sales tax, a value-added tax is imposed at every step of the supply chain of goods and some services, including manufacture, shipping, importation, distribution and retail sale.

Facing the threat of such a tax, San Juan’s Catholic schools superintendent, Ana Cortes, met with representatives from several community segments to explore forming a joint opposition effort. Out of the meeting came Todos Somos Pueblo (We all are the people), a wide-ranging coalition of 85 organizations, with the archdiocesan Vicariate of Catholic Education as a leading force.

On March 5, the coalition, anchored by Catholic schools, led a rally at the Capitol in San Juan. Although some saw the event as political in nature, Catholic leaders said it was “actually a loud joint call to social justice.”

“It’s not a matter of partisan politics, but a movement centered on the economic impact to common people,” said Father Santa, “and it has the full blessing of San Juan Archbishop Roberto Gonzalez Nieves.”

Father Santa’s call to all private schools, colleges and universities to join the effort paid off. By the time Catholic leaders started their formal morning program at the rally with an invocation and prayer, an estimated 1,000 Catholic students from San Juan and two other dioceses waved banners while chanting slogans to the beat of tropical music provided by band members from Nuestra Senora de Belen academy.

Helping coordinate the rally and participating in it were student organizations representing the wider public college population from across the island. They gathered about a mile away from the Capitol building in Old San Juan and reached the Capitol square by early afternoon, pushing unofficial crowd estimates up to around 7,000.

Puerto Rico’s Catholic education system has been declining for decades. The San Juan Archdiocese had 73 schools in 1975 and today has 57, said Father Santa. Two are scheduled to close in May.

He explained the decline started after the Second Vatican Council, when fewer women religious entered the education field, creating the need to hire lay teachers — with their salaries added to the overall budget. In addition, he said, the number of students per classroom has declined, the cost of educational technology is high and, more recently, the number of parents who are unemployed is rising.

Three months into his current term, Gov. Alejandro Garcia Padilla took the first step in that direction, at a time when the island’s economy was already practically bankrupt.

In a Feb. 5 editorial, Bloomberg L.P. said: “This crisis has been a long time brewing. Since 2006, Puerto Rico’s economy has contracted every year but one.” The editorial referenced a previous article that stated, “Puerto Rico has $70 billion in debt outstanding, all of it needing to be repaid with interest — and the simple fact is that there’s no way it’s going to be able to do that.”

The governor had a measure that includes value-added tax provisions and a general “fiscal transformation” introduced in the Legislature Feb. 11.

Mass opposition to the bill keeps growing, with multiple protests sometimes held on a single day.

Cortes told the press Feb. 26 that Catholic schools would be rallying in opposition.

“If (the value-added tax) goes forward, it will be horrible,” she said. “There are parents already announcing they will not be able to do it (pay for schooling).”

Reacting to Cortes’ statement, Padilla said the following day he was asking the Legislature to modify the bill inserting a value-added tax exemption for private education. However, three days later he backtracked, explaining “some private schools costs” would still carry the new tax.

“We will protest against the government’s perception that private education is a commodity, not a social value,” Cortes said in response.

“Some people have promoted (value-added tax) comparing us with other countries,” Father Santa told CNS. But “in those countries government subsidizes all education, including Catholic, because we get better results at a lower cost per student,” he said. “It is strange they are trying to penalize us for saving the government money.”

PREVIOUS: English cardinal urges debate on family synod to stay out of the press