Fight against ‘logic of profit,’ unemployment is unjust, pope says 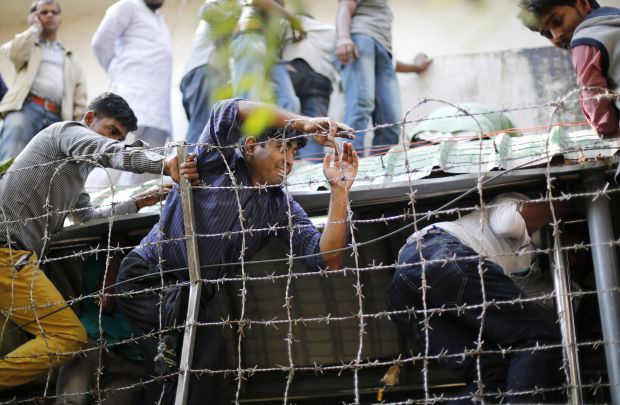 Bangladeshis in Dhaka climb over barbed wire fences Feb. 12, to get into the office of the Expatriate Welfare and Overseas Employment Ministry to register their names for job placements in Saudi Arabia. (CNS photo/Abir Abdullah, EPA)

VATICAN CITY (CNS) — Because unemployment is an injustice that harms human dignity, people must make certain that the “logic of solidarity and the logic of justice” prevail over the “logic of profit,” Pope Francis said.

“When people don’t earn their bread, they lose their dignity. This is the tragedy of our times, especially for young people, who, without work, have no prospects for the future and can become easy prey to criminal organizations,” he said March 25 at the end of his general audience talk in St. Peter’s Square.

The pope’s comments came after he greeted a delegation of state workers from Calabria in southern Italy; they were led by Bishop Luigi Renzo of Mileto-Nicotera-Tropea. Public employees of the province of Vibo Valentia, where Bishop Renzo’s diocese is located, had not been paid for the past five months and were planning a two-day general strike.

The pope said he was aware of the workers’ “serious economic situation” and expressed his prayers and concern for their “unbearable” difficulties.

Launching a “heartfelt appeal,” Pope Francis asked that “the logic of profit not prevail over that of solidarity and justice.”

The human person and respect for human dignity must be at the center of all issues, especially when it comes to work, he said.

“Having work is a question of justice and it is an injustice to not be able to have a job,” he said.

NEXT: Priests, nuns remain in Yemen despite ongoing conflict