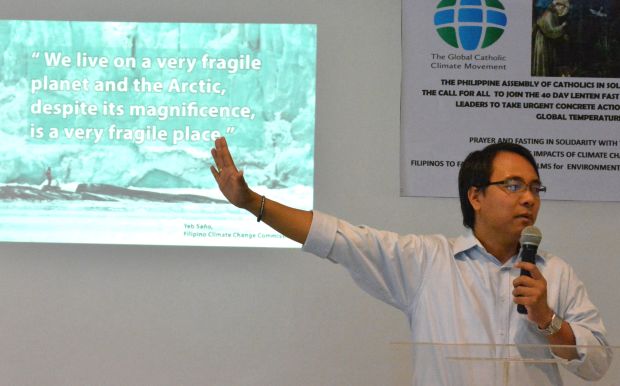 MANILA, Philippines (CNS) — Dozens of Filipino Catholics are joining a global Lenten fast to call on world leaders to act on climate change.

Participants, meeting in Manila March 11 to prepare for the day of fasting March 27, said their action is meant to call attention to the need for immediate action in the wake of worsening natural disasters.

The March 27 fast is part of a larger campaign coordinated by the Global Catholic Climate Movement. People in 50 countries have adopted a one-day rotating fast during Lent to call attention to the need to address climate change and protect the environment.

“(Climate change) is not merely an environmental problem, it is a moral problem,” Yeb Sano, a Catholic and a member of the Philippine Climate Change Commission, told the orientation meeting of fast participants.

Sano pointed to the recently released Natural Hazards Risk Atlas developed by the risk assessment firm Verisk Maplecroft, which found eight of the 10 cities most vulnerable to natural disasters were in the Philippines.

He told Catholic News Service he was happy to be part of the fast because citizens “cannot afford to wait” around for world leaders to begin addressing climate change.

“The U.N. is not designed to solve climate change,” Sano said. “It will take global citizens.”

Sano has become one of the Philippines’ leading voices for climate justice. In late 2014 he led a 40-day climate awareness walk from Manila to Tacloban, which was decimated by Typhoon Haiyan a year earlier, leaving 7,300 dead or missing and hundreds of thousands of people homeless.

His profile rose after delivering an emotional plea for action during the 2013 U.N. Climate Change Conference in Warsaw, Poland, days after the typhoon. At the time, he said he was fasting “to be in solidarity with poor brothers and sisters” who had nothing to eat following Haiyan’s destruction.

Other participants said they wanted to take part in the fast because they are guided by their faith to act.

Tomas Insua of Argentina, a graduate student at Harvard University, addressed the meeting by Skype and described climate change as “the existential threat of our generation.”

Fasting also takes on a political dimension, he said, suggesting that lawmakers should be convinced to do something about climate change and that they would be swayed by large groups such as the Global Catholic Climate Movement.

Lou Arsenio, ecology ministry coordinator in the Manila Archdiocese, reminded participants that almsgiving was an important part of the fast and urged people to contribute what they did not spend on meals during their fast to the church’s climate-related activities.

Sister Gloria Carmen Eamiguel, who works in the Justice, Peace and Integrity of Creation Office of her congregation, the Franciscan Missionaries of Mary, said any activities on behalf of social action must be sustaining.

“We create networks to really raise the consciousness of the people about climate change,” Sister Gloria said.

Involving people in environmental projects and actions was more important than simply discussing climate during meetings and symposia, she added.

Columban Father John Leydon of Our Lady of Remedies Parish in Manila stressed the importance of Pope Francis’ upcoming encyclical on caring for the environment. He said he anticipated its impact would be like that of Blessed Paul VI’s encyclical “Populorum Progressio” on the development of peoples, which he said transformed the church.

“My sense is this encyclical is going to have the same effect on the consciousness of Catholics throughout the world, and especially here in the Philippines,” Father Leydon said.

Nearly 100 organizations and individuals worldwide formed the Global Catholic Climate Movement Jan. 15, the day Pope Francis arrived in the Philippines for a five-day visit. Pope Francis said he wanted to visit with people who suffered through and survived Haiyan as well as a magnitude-7.1 earthquake three weeks before the typhoon hit.

NEXT: ‘My pontificate will be brief,’ pope says, reflecting on 2 years of his papacy