For Easter, pope sends assistance to displaced in Iraq, Nigeria 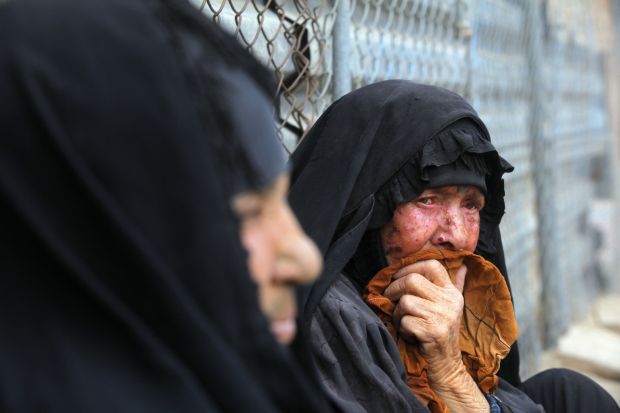 Displaced Iraqi women sit outside of their tent at a camp for displaced people between the cities of Fallujah and Ramadi, Iraq, March 12. (CNS photo/Alaa Al-Marjani, Reuters)

VATICAN CITY (CNS) — As Holy Week and Easter approached, Pope Francis wanted to show his ongoing concern for people persecuted and displaced by violence in Iraq and in northern Nigeria.

Although not specifying the amount, the Vatican press office said March 27 that the pope was sending aid money to people seeking shelter in Iraq’s Kurdistan region and to the Nigerian bishops’ conference to assist families in the northern part of the country where the terrorist group Boko Haram has been on a rampage.

In addition, the Vatican said, the people of the Diocese of Rome, “united with their bishop,” Pope Francis, held a special collection and will send “colomba” Easter cakes to the displaced in Iraq.

“In Holy Week,” the Vatican statement said, “these families share with Christ the experience of being unjustly subjected to violence and they participate in the suffering of Christ himself.”

Cardinal Fernando Filoni, who visited refugees and displaced people in Iraqi Kurdistan last August, will return for Holy Week, the Vatican said. The cardinal is prefect of the Congregation for the Evangelization of Peoples and the former nuncio to Iraq.

“Pope Francis is constantly concerned about the situation of Christian families and other groups who have been the victims of being expelled from their homes and villages, particularly in the city of Mosul and on the Ninevah Plain,” the Vatican said. Terrorists from Islamic State have been active in the region.

“The pope prays for them and hopes that they soon can return and resume their lives on the land and in the places where, for hundreds of years, they lived and wove relationships of peaceful coexistence with all,” the Vatican statement said.

NEXT: Jerusalem’s Armenians mark genocide in ancestral homeland a century ago