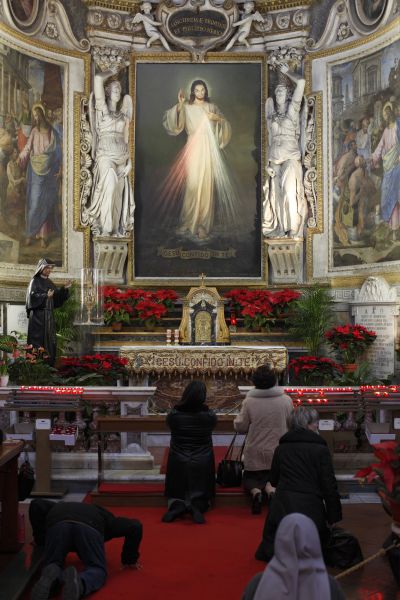 People pray before the Eucharist and an image of Jesus of Divine Mercy at Santo Spirito Church in Rome in this Jan. 14, 2011 file photo. (CNS photo/Paul Haring)

VATICAN CITY (CNS) — The rector of a Rome sanctuary dedicated to Divine Mercy said he sees a “golden thread” connecting the upcoming Holy Year of Mercy and the message Jesus conveyed to St. Faustina Kowalska nearly 85 years ago.

Father Jozef Bart, rector of the Church of the Holy Spirit, said the three most recent popes all “insisted on this message of mercy,” starting with St. John Paul II, who canonized St. Faustina in 2000 and declared the Sunday after Easter to be Divine Mercy Sunday.

St. Faustina was a Polish Sister of Our Lady of Mercy. She had visions of Jesus saying he would show mercy to those who prayed for it and shared it with others. The Church of the Holy Spirit, just a block from St. Peter’s Square, has a side chapel dedicated to Divine Mercy.

Father Bart, who was born in Poland but is a priest of the Diocese of Rome, said Pope Francis’ Year of Mercy is the culmination of the church’s official recognition of the message of Divine Mercy.

“It seems that heaven is in a great rush to come help this world that truly has many problems, that is sick and wounded,” he said.

Pope Francis surprised Catholics March 13 by announcing the special Holy Year, which will begin Dec. 8, 2015, and end Nov. 20, 2016. The biblical theme is “Be merciful, just as your Father is merciful.”

“Pope Francis does not simply want to dedicate a year to mercy or to call a meeting of the bishops on mercy. Pope Francis will open the Holy Door so that it can be a year for mercy,” he emphasized.

God’s mercy is for all of humanity — believers and nonbelievers alike — and Christians are called to bring this message to the world for all to receive, Father Bart insisted.

Reflecting on the challenge of bringing God’s mercy to nonbelievers in a secular society, Father Bart described mercy as “a point of encounter with all peoples,” particularly through what are traditionally called the corporal acts of mercy, such as tending to the sick, the hungry and the imprisoned. Through these concrete actions, “I can reach all souls, whether they believe or not,” he said.

In his frequent catecheses on mercy, Pope Francis seems to be “convincing us of the truth of mercy,” said Father Bart. Fundamental to this pontificate is the call to “go out to the peripheries” to bring God’s mercy to all people who suffer, he added.

“But God will never do that,” he said.

He also spoke of the “great battle between good and evil today,” and said human recourse to God’s mercy is impeded by the devil, who wants to keep humanity enslaved by sin.

But God, through his mercy, grants people “new life” when they place themselves before him, even with all of their wrongdoing, mistakes, weaknesses and fragility, the priest said.

Father Bart acknowledged that the message of God’s mercy is not new; it is the message of the Gospel. But the church’s mission, at every point in history, is “to introduce humanity to God’s mercy and to make this mercy known,” he said. And St. Faustina “shed new light and gave a particular vigor to the message of mercy preached by the church.”

To live mercy is to have an open heart, to be compassionate and full of tenderness toward others, just as “Jesus ripped open his heart for us on the cross, before our hardness of heart,” he explained. A merciful heart is moved by the needs of others and springs to action to resolve their hardships.

“We can speak about mercy day and night, but we have to do it,” he said. “If behind our words there aren’t concrete actions, then this is not the fullness of mercy.”

He said its fullness can be achieved through proclamation, prayer and works. Though the most important aspect for the jubilee is prayer, he said.

“We must invoke God’s mercy,” he said. “We must ask that this mercy come, and that God will have mercy on us all.”

NEXT: With Armenian Catholics, pope will declare new ‘doctor of church’