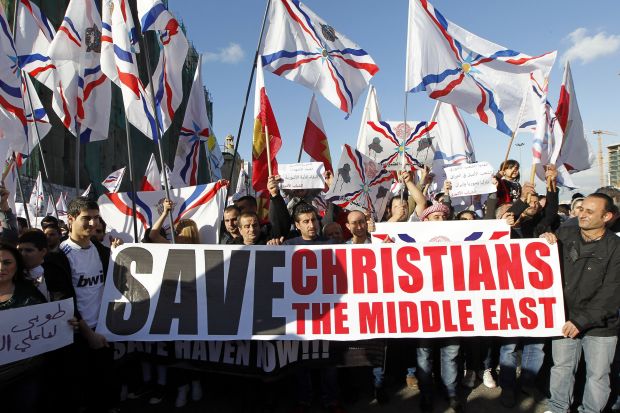 Christians who had fled the unrest in Syria and Iraq carry placards and wave flags during a gathering in front the U.N. house in Beirut Feb. 28. (CNS photo/Nabil Mounzer, EPA)

VATICAN CITY (CNS) — In a joint statement, representatives of more than 50 countries have recognized that Christians are particularly endangered in the Middle East, and they called on the international community to reaffirm the human right to freedom of religion.

The violence carried out by terrorist groups “creates the risk of complete disappearance for the Christians” in the region, they said.

The statement, submitted to the U.N. Human Rights Council in Geneva March 13, was sponsored by the delegations of the Holy See, Lebanon and Russia. The United States, Canada, the United Kingdom, Australia, Iraq and Israel were among the 52 signatories.

Ongoing conflicts in the region have been “disastrous for the entire population” and have “seriously threatened” the existence of “many religious communities,” the statement said. People continue to fall victim “to barbaric acts of violence” and “churches and ancient shrines of all religions have been destroyed.”

But the statement then zeroed in on the Christian situation.

“Christians are now especially affected,” said the statement. “These days even their survival is in question.”

“There are more and more reasons to fear seriously for the future of the Christian communities that have more than 2,000 years of existence in this region, where Christianity has its full place and began its long history,” the statement said.

The signatories called on the international community to support the human rights of Christians and other religious and ethnic communities in the Middle East and to work toward building “a culture of peaceful coexistence.”

“A future without the different communities in the Middle East will run the risk of new forms of violence, exclusion and the absence of peace and development,” they warned.