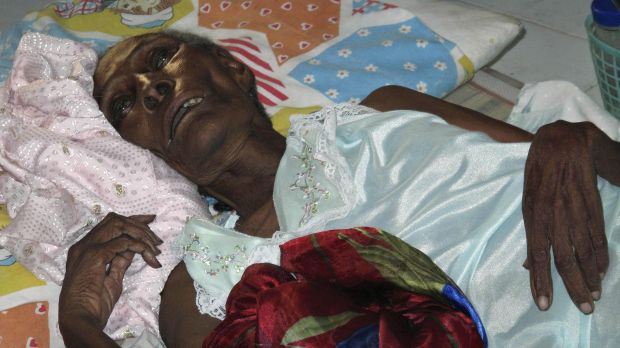 A Haitian resident suffering from cholera waits for medical treatment at a local hospital in the town of Saint Marc Oct. 22. (CNS photo/St-Felix Evens, Reuters)

PORT-AU-PRINCE, Haiti (CNS) — A recent spike in cholera cases has perplexed health care workers, and Haiti’s health minister acknowledged that her country faces a major challenge in limiting the spread of the water-borne disease before the rainy season returns in April.

The surge in December and January, a normally dry time in Haiti, has since subsided, but Dr. Florence Duperval Guillaume, minister of public health and population, expressed concern about future outbreaks and is working with an international task force to prevent their return.

“We’re trying to see before the next rainy season how we could control the causes of these peaks,” Guillaume told Catholic News Service in mid-February.

The spikes were reported in the densely populated slums of Carrefour, the Central Plateau and Artibonite department, regions prone to outbreaks in the past, Guillaume said.

She described the outbreaks as occurring in “areas where poverty is rampant, where there is no access to potable water and where they have bad management of human waste.”

Until October 2010, cholera had not been reported in Haiti for a century. The disease showed up in a tributary of the Artibonite River in central Haiti. Scientific studies concluded the disease likely was introduced when human waste was discharged into the tributary by U.N. peacekeepers from Nepal, where cholera is endemic.

Through Feb. 7, more than 730,000 cholera cases had been reported, leading to nearly 8,900 deaths, according to statistics provided by Guillaume.

In 2013, the health ministry and the National Directorate for Water Supply and Sanitation, DINEPA, developed a plan for eradicating cholera by 2022. Guillaume said the plan as first envisioned was estimated to cost $2 billion, funding that needed to be secured from outside the country.

To make the effort more manageable, the agencies adopted a shorter-term plan, covering 2013-2015 with an estimated cost of $200 million.

Even funding for that effort is limited, however, with the U.N. arranging for the World Bank to provide $20 million and the Inter-American Development Bank promising to assist the Haitian directorate with water and sanitation infrastructure. No other funding has been secured, Guillaume said.

The plan’s key components include weekly monitoring to determine which areas are most prone to outbreaks; education in proper hygiene and how the disease is transmitted; increasing access to hygiene facilities, safe water and sanitation services; expanding solid waste collection in and around Port-au-Prince; and strengthening the public health system.

“Water and sanitation, you have to understand, will take a long time,” Guillaume said.

The ministry has trained dozens of community health workers, who teach residents about proper hygiene. The effort has been a success in most regions as the overall incidence of the disease has declined.

Guillaume explained that the ministry usually partners with hospitals and health clinics, many of which are run by faith-based organizations.

“These religious institutions take charge of communities that are most vulnerable, particularly in rural areas,” she said.

Catholic Relief Services is working with the Artibonite health department and the national directorate on prevention and preparedness efforts.

Guillaume admitted that given Haiti’s limitations, the program could break down at any point.

“It’s fragile because as of now less than half of the population does not have access to potable water, and much more do not have access in faraway rural areas and in some neighborhoods,” she said.

She also expressed concern that Haiti’s cholera epidemic may have been overlooked while the world focuses on limiting the spread of Ebola from West Africa.

“If people forget Haiti, chances are we will go back to the same stage we were in 2010, and in that particular case Haiti will become a real issue for the region,” she said.

PREVIOUS: Cardinal: Pope ‘tells it like it is,’ is clear about church’s message

NEXT: Synod in Nagasaki, Japan, offers recommendations to church in ‘crisis’