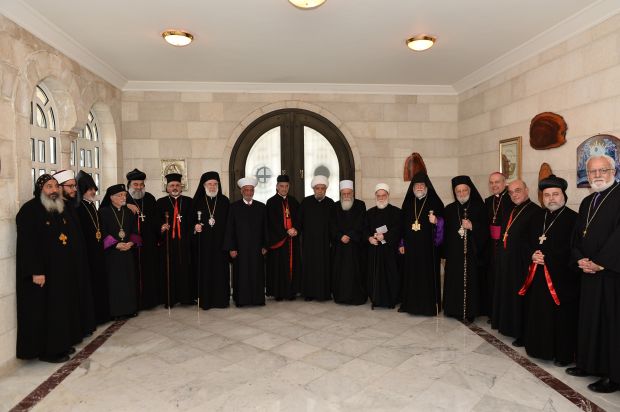 BEIRUT (CNS) — Lebanon’s Catholic, Orthodox and Muslim religious leaders affirmed the “essential role” of the Christian presence in the Middle East and called for terrorism in the region to be confronted “culturally, educationally and politically.”

In a joint statement issued March 30 at the conclusion of an interfaith summit in Bkerke, the seat of the Maronite Catholic Church north of Beirut, the religious leaders emphasized that the Christian presence “plays an essential role” in the identity of the region “and predates Islam by several centuries.”

Terrorism, the religious leaders said, “must be fought through unifying the ranks of moderation” and “modernizing the religious rhetoric” with an emphasis on “reconciliation, tolerance and coexistence.”

“Eastern Christians are the first victims of the waves of violence in the region,” the leaders said, noting that Assyrians were the latest target as they cited the Islamic State invasion Feb. 23 of about 30 Assyrian Christian villages in the Khabur region of Syria.

“The wars in Syria and Iraq have been devastating,” the statement said. “As a result, 1.5 million Syrians have fled to Lebanon, in addition to thousands of Iraqis, not to mention (the presence of) half a million Palestinians.”

The number of Syrian refugees alone is equal to more than 25 percent of Lebanon’s population of about 4 million, putting Lebanon under great strain.

“The unorganized entry of Syrian refugees surpassed Lebanon’s coping capacity at several levels, from security to housing, labor, health, education, transport and food supply, which has depleted a treasury that is reeling under the burden of debt,” the leaders warned.

They also expressed a need to “prevent the temporary presence of refugees” from turning into a permanent presence, which they said would pose “a major threat to the unity and stability” of Lebanon.

The Christian and Muslim leaders said the dire circumstances of the refugees “require active international action and an increase in aid.”

“The international community must realize that Lebanon’s capacity is limited,” they stressed.

The leaders expressed “deep concern and disappointment” that the presidency of Lebanon remains vacant. The post is reserved for a Maronite Catholic under the country’s power-sharing system. The term of the previous president, Michel Suleiman, ended in May. Legislators have failed to agree on a successor.

“The election of a president must remain a critical and vital issue because the Maronite Christian president is the guarantee for coexistence,” the leaders said.

Regarding the crisis unfolding in Yemen, the leaders called on Arab states to “contain the escalation and protect the sovereignty, security and unity of all Arab countries.”

They applauded the feast of the Annunciation, March 25 — recognized by the Lebanese government in 2010 as an official national Christian-Muslim annual holiday — stressing that it enhances Lebanon’s message of coexistence to the world.

About 33 percent of Lebanon’s existing population is Christian, with the majority Maronites.