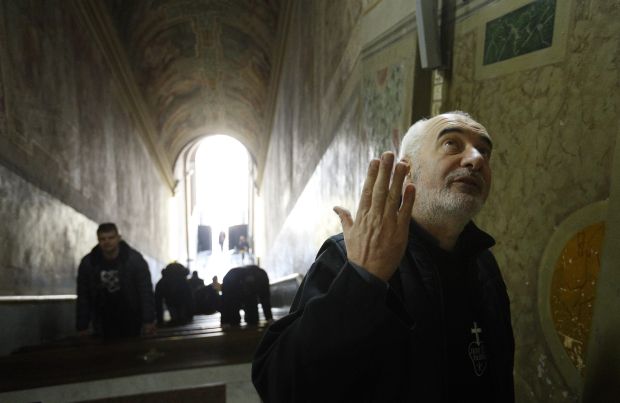 Passionist Father Francesco Guerra talks about artwork above the Holy Stairs as people pray on their knees at the Pontifical Sanctuary of the Holy Stairs in Rome March 10. (CNS photo/Paul Haring) 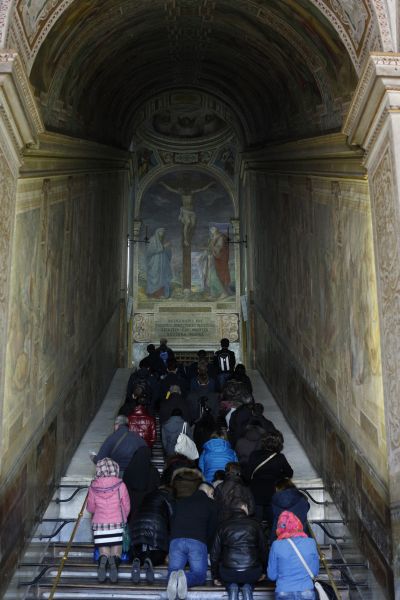 People pray on the Holy Stairs at the Pontifical Sanctuary of the Holy Stairs in Rome March 10. Tradition maintains that Jesus climbed the stairs when Pilate brought him before the crowd. It’s believed that Constantine’s mother, St. Helen, brought the stairs to Rome from Jerusalem in 326. (CNS photo/Paul Haring)

VATICAN CITY (CNS) — Having so much world-famous art housed in Rome’s churches and chapels has risked turning the city’s sacred spaces into sightseer circuses.

A hushed prayerful atmosphere for the faithful is often broken by clicking cameras and tourists exchanging guidebook details.

But one Rome attraction has managed to hold on to its spiritual side, according to the rector of the Pontifical Sanctuary of the Holy Stairs.

Located across a busy street from the Basilica of St. John Lateran, the sanctuary remains “a place of prayer” even as thousands of people stream through its doors every day, Passionist Father Francesco Guerra told Catholic News Service.

“It is felt to be a sacred place” not just by Catholics and Orthodox Christians, but even people of other faiths like Hindus and Buddhists as they are drawn to the sanctuary’s spiritual atmosphere, he said in early March.

“Our job is to keep the Holy Stairs a holy place,” he whispered as he pointed to what he saw as a sign of success: two tourists quietly and respectfully walking through a chapel while a dozen faithful were seated or standing in prayer.

The Gospel story of Jesus driving the money-changers out of the temple is a kind of mandate about the importance of keeping these spaces focused on the sacred, he said. “Even if it’s a place of great art, a church is always a place of prayer,” Father Guerra said.

The Holy Stairs, according to tradition, are the ones Jesus climbed when Pontius Pilate brought him before the crowd and handed him over to be crucified. The 28 marble steps, some spattered with droplets of blood, are covered with thick wood panels, now worn smooth from centuries of human traffic. It’s said that Constantine’s mother, St. Helen, brought the stairs to Rome from Jerusalem in 326 A.D.

From the moment people walk into the sanctuary, they are surrounded by images and symbols associated with the Passion.

Overhead in the atrium, frescoed angels carry the cross, ladder, nails, spear, sponge and chalice, and, standing at each stairwell are life-sized marble statues: Jesus weeping in the Garden of Gethsemane; Judas confidently pulling a pensive Jesus close for a kiss; Pontius Pilate presenting Jesus bound and crowned with thorns to the people; and Jesus tied to a column for flagellation. With the statues’ pedestals at shoulder-level, people kiss or touch Jesus’ feet.

“People need this concreteness” as part of entering into a deeper form of self-examination and meditation, Father Guerra said.

The Sanctuary of the Holy Stairs is like a catechetical storybook, whose wall-to-ceiling frescoes take pilgrims on a visual journey of Christ’s passage from the Last Supper to his passion, death, resurrection and ascension into heaven.

A unique feature of the sanctuary is that pilgrims climb the Holy Stairs on their knees in silent prayer.

Advancing up the relic on one’s knees and seeing the images around them “help the pilgrims enter into the spirituality of those events” and focus on Jesus’ passion, he said.

“They physically take on a condition that is outside the norm, they’re not walking, but laboring, sacrificing to get up the stairs, which helps the spirit” engage in the penitential and sacrificial aspects of the Passion, he said.

“We don’t just have minds, we also have bodies, which here become part of the act of prayer,” he said.

“Today we read the Gospel and reflect on the Gospel, but in the Middle Ages, people didn’t read, they went to church, they saw the images and prayed,” Father Guerra said.

“Now there is much emphasis on study and reason, but before it was all about participation,” he said.

Lent and Holy Week often offered very powerful experiences for the laity as the processions, especially the Way of the Cross, and other devotional practices gave people the opportunity to “re-live events” in the Bible and church tradition, he said. It was more than acting in or watching a scene, “but was identifying oneself with” Christ, following in his footsteps and “incarnating” his journey, he said.

John Gildea from Connecticut underwrote the restoration of 14 framed paintings from the 18th-century of the Stations of the Cross in the Chapel of the Crucifix.

“The beauty and the state of the stations were so moving that I was so honored to be able to assist in a small way,” he told CNS in an email. He said he only discovered the sanctuary after being brought there by a U.S. art gallery curator who is coordinating the Holy Stairs project.

“Unfortunately, many Americans, including myself, aren’t aware of the church or are too busy visiting other sites — a real shame,” he wrote.

Father Guerra, who studied art history in Florence, said Western culture has lost touch with the theological and religious inspiration of Europe’s Medieval, Renaissance and Baroque art and literature. Today’s guidebooks and even education “removes art from its roots, which is faith, spirituality and humanity,” he said.

“My dream is that the faithful can come here and they can absorb, breathe in the spirituality that this art expresses.”

NEXT: In Holy Year, pope wants to share experience of mercy he had as teen