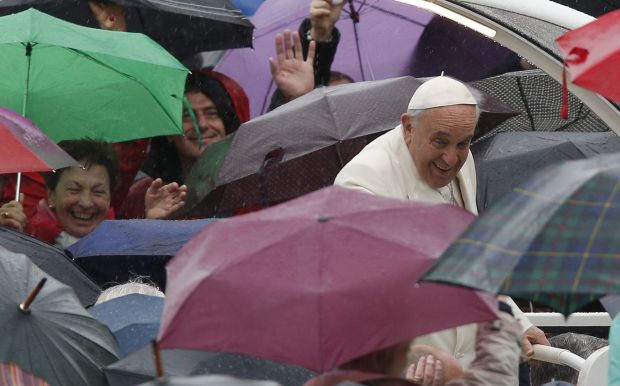 VATICAN CITY (CNS) — No matter how weary, wounded or sinful a family has become, the church will always do everything to try to help family members heal, convert and reconcile with the Lord, Pope Francis said.

The pope called on everyone to pray each day for the upcoming Synod of Bishops on the family and for the church so that it could be even more “dedicated and united in the witness of the truth of God’s love and mercy for the families of the world, (with) no one excluded either inside or outside the flock.”

Prayers, “not gossip,” are needed for the synod, and “I invite even those who feel distanced or those who aren’t used to it to pray,” he said at his weekly general audience in St. Peter’s Square March 25.

The pope dedicated his catechesis to the day’s feast of the Annunciation of the Lord and the 20th anniversary of St. John Paul II’s landmark encyclical on the value and inviolability of human life, “Evangelium Vitae” (“The Gospel of Life”). The day also marked the Day for Life in some countries.

Today was “a little special” in the pope’s series of general audience talks on the family as it represented “a break for prayer,” he said.

Special prayer cards with the pope’s prayer for the synod on the family were distributed to the more than 17,000 people who turned out in the pouring rain for the audience.

“Perhaps it will be a little wet,” he said about the prayer card, asking people to keep it with them and recite the prayer as often as possible. He led the people both in the prayer on the card and in reciting the Hail Mary.

He said the Hail Mary touches upon “the beauty of this bond” between God and the family — the beauty of God wanting to be born a child into a real human family.

St. John Paul’s encyclical, Pope Francis said, explained the importance of the family as “the womb of human life” and as an institution blessed by God to be a community of love and life, entrusted with “the mission of procreation.”

In fact, Pope Francis said, “the bond between the church and family is sacred and inviolable” as the church “is solemnly committed to taking care of the family,” which is a gift of God, in good times and bad.

“The church, as mother, never abandons the family even when it is disheartened, wounded and demeaned in so many ways,” he said, “not even when (the family) stumbles in sin or distances itself from the church.”

The church, he said, “will do everything to try to take care of it and heal it, invite it to conversion and reconcile it with the Lord.”

Given that commitment, the pope said, the church needs prayers that are “full of love for the family and for life” and a community of people who know “how to rejoice with those who rejoice and suffer with those who suffer.”

Pope Francis asked that prayers and the synodal process itself be driven by “the compassion of the Good Shepherd for his flock, especially for people and families who, for different reasons, are ‘troubled and abandoned, like sheep without a shepherd.'”

Prayers for the synod are for “the good of everyone,” he added.

After the general audience, the Vatican released a second list of delegates elected to attend the synod on the family. Pope Francis approved the bishops elected by members of 38 bishops’ conferences and the Syro-Malabar Church. In early February, the Vatican had released the first list of delegates, including those from the United States. Most lists are expected in the coming months.

Pope Francis’ general audience celebration of St. John Paul’s encyclical on life was preceded by a Mass and prayer vigil, organized by the Pontifical Council for the Family. The event was March 24 at Rome’s Basilica of St. Mary Major, with similar commemorations at the sanctuaries of Fatima in Portugal, Lourdes in Frances and Guadalupe in Mexico.

At the Mass in Rome, Msgr. Carlos Simon Vazquez, council undersecretary, said “Evangelium Vitae” echoes the Gospel revelation that God sent his Son so that everyone would have life and have it in abundance. Christians, he said, are called to live and to promote abundant life.

The church, he said, is often “alone” in its pro-life work, which means that it must be even more prophetic and creative in promoting respect for life.