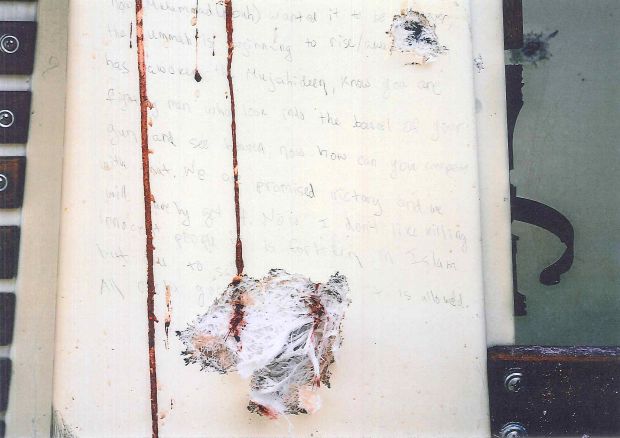 A photo provided March 5 by the The United States District Attorney's office shows writings on the inside of the boat where suspected Boston Marathon bomber Dzhokhar Tsarnaev hid during the manhunt for him. Tsarnaev, 21, faces the death penalty if convicted of carrying out the dual bombings. (CNS photo/United States District Attorney's office, EPA)

VATICAN CITY (CNS) — Pope Francis came out squarely against the death penalty once again, calling it “unacceptable” regardless of the seriousness of the crime of the condemned.

Pope Francis met with a three-person delegation of the International Commission Against the Death Penalty March 20, and issued a letter on the occasion urging worldwide abolition.

Citing his previous messages against the death penalty, the pope called capital punishment “cruel, inhumane and degrading” and said it “does not bring justice to the victims, but only foments revenge.”

Furthermore, in a modern “state of law, the death penalty represents a failure” because it obliges the state to kill in the name of justice, the pope said. Rather, it is a method frequently used by “totalitarian regimes and fanatical groups” to do away with “political dissidents, minorities” and any other person deemed a threat to their power and to their goals.

“Human justice is imperfect,” he said, and the death penalty loses all legitimacy within penal systems where judicial error is possible.

Increasingly, public opinion is against the death penalty, in view of the effective means available today to restrain a criminal without denying them the possibility to redeem themselves and of a “greater moral sensitivity regarding the value of human life,” Pope Francis said.

The death penalty is an affront to the sanctity of life and to the dignity of the human person, he said. It contradicts God’s plan for humankind and society and God’s merciful justice, he added.

Capital punishment “is cruel, inhuman and degrading, as is the anxiety that precedes the moment of execution and the terrible wait between the sentence and the application of the punishment, a ‘torture’ which, in the name of a just process, usually lasts many years and, in awaiting death, leads to sickness and insanity.”

The pope went on to say that the application of capital punishment denies the condemned the possibility of making reparation for the wrong committed, of expressing their interior conversion through confession, and expressing contrition, so as to encounter God’s merciful and saving love.

Speaking about life imprisonment, Pope Francis said such sentences makes it impossible for a prisoner to “project a future” and in that way can be considered a “disguised death” as it deprives prisoners not only of their freedom but also of their hope.

PREVIOUS: In Holy Year, pope wants to share experience of mercy he had as teen