Salvadorans who knew slain Jesuit speak of him as ‘martyr, saint’ 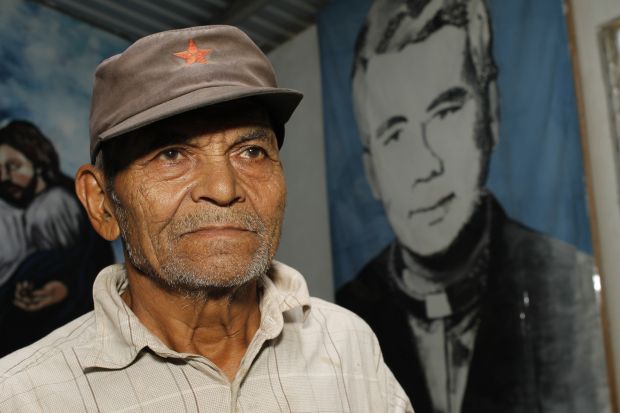 EL PAISNAL, El Salvador (CNS) — Salvadorans who knew Jesuit Father Rutilio Grande are proud that one of their own is being considered for sainthood.

“We are all peasants here, and many of us met him and witnessed how Father Grande gave his life for his people … we are very thankful,” Francisco Orellana, 70, told Catholic News Service.

On March 12, 1977, Father Grande was the first priest executed by Salvadoran death squads. The turbulent times preceded the official start of the 1980-1992 Salvadoran civil war that left 70,000 dead and 8,000 missing.

This March 12, the town council was to honor him as “Hijo Meritisimo of El Paisnal,” awarded to those who have made significant contribution to the town, said Alexander Torres, a town councilman.

Orellana lives in Comunidad Padre Rutilio Grande, about 25 miles north of San Salvador, the country’s capital. This rural community was born in May 1991 after Salvadorans who had fled the civil war and settled in Nicaragua returned to their country.

“We are thrilled, he is a martyr, a saint, and we are proud of him, that’s why our community bears his name,” Domingo Cortez, 62, told CNS.

Father Grande’s canonization process was announced Feb. 4, at the same news conference at which the Vatican announced former Archbishop Oscar Romero would be beatified — a step toward sainthood — this year.

Scholars and theologians agree that Archbishop Romero was strongly influenced by the pastoral work with a clear option for the poor that Father Grande carried out in rural communities in northern San Salvador. The Jesuit was a fiery champion of the poor and oppressed and used the pulpit to denounce actions of the government, death squads in his country, violence from the outbreak of civil war and military occupation of churches.

“It is impossible to understand Romero without understanding Rutilio Grande,” said Archbishop Vincenzo Paglia, postulator or chief promoter of the archbishop’s sainthood cause, at the February news conference. The process was opened late last year, he added.

Archbishop Romero once said: “When I looked at Rutilio lying there dead I thought, ‘If they have killed him for doing what he did, then I, too, have to walk the same path.'”

The Italian newspaper Avvenire reported that the archbishop met Father Grande in 1967 at the seminary of San Jose de la Montana, where the Jesuit taught.

According to one confrere, Father Grande believed the only solution to “the evils of Salvador” lay in taking the Gospel to the people, especially the rural population. He was convinced that by following Christ and being inspired by love, the Gospel could transform people and institutions more deeply than any political program or policy, the newspaper reported.

It said Father Grande left academia to live with the poor not out of any political motivation, but because, as he said, “God loves and prefers the poor.”

Two others were murdered with Father Grande: Manuel Solorzano, 72, and Nelson Rutilio Lemus, 16.

The remains of the three are inside the village’s church, a place visited by human rights activists who want to understand part of El Salvador civil war history. Local authorities are promoting a tourism project to boost the economy of the town and the rural families in the area, and the murdered Jesuit is a key figure of that plan, called Historical Memory Tourist Route.

At least $350,000 will be invested to improve the village infrastructure, like hostels and small restaurants, which will be run by residents of the communities.

Meanwhile, Msgr. Ricardo Urioste, president of the Romero Foundation, said it will take time to go through the process of researching Father Grande’s life, as part of his canonization process, but the good news is that the cause has already started.

“The idea of his beatification came up because he was a very honest priest, with an apostolate very close to the poor, as Jesus was, and all the church is very happy about that,” he said.

PREVIOUS: Don’t be bitter or give up; offer world your wisdom, pope tells seniors