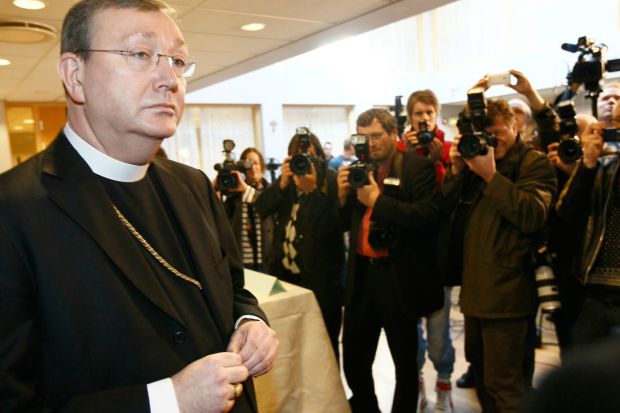 “Bishop Bernt Eidsvig of Oslo has told us how his general vicariate’s premises were raided in connection with inconsistencies over his diocese’s membership registration,” Precious Blood Sister Anna Mirijam Kaschner, secretary-general of the Nordic bishops’ conference, said in a March 5 statement.

“While Bishop Eidsvig has acknowledged failures in registering Catholics, he denies any conscious or intentional fraud. The bishops’ conference recognizes him as a sincere and honest shepherd of his church and regrets the circumstances that led to this confusion.”

The statement was published during the Nordic bishops’ March 2-6 plenary in Essen, Germany, a week after the police raid on Bishop Eidsvig’s offices in the Norwegian capital.

The statement said the bishop had been accused of “blatantly misregistering” his diocese’s 2010-14 membership and ordered to remove non-Catholics from its lists, which are used to allocate state subsidies per capita to religious communities in Norway.

However, it added that Bishop Eidsvig had promised to do “everything in his power” to resolve the issue and said the Oslo Diocese had already deleted up to 8,000 of its 79,000 names.

“If there are suspicions something illegal has been happening and our diocese has acted incorrectly, then someone will have to pay,” he told Catholic News Service March 4. “But while this negative publicity hasn’t helped us, I think some people will see it’s a complex question. The priority now is to get out of this situation and continue our work as a church.”

Bishop Eidsvig was named as an aggravated fraud suspect, along with his diocese’s chief financial officer, after police searched his offices and two private homes Feb. 26, seeking evidence the church sought higher subsidies by listing immigrants as Catholics on the basis of their nationality.

It added that police had been notified by a church whistleblower that members were being registered without their knowledge and said the practice had continued since 2011, although Bishop Eidsvig had ordered it to stop in 2013.

An Oslo police spokeswoman, Kristin Rusdal, told Agence France-Presse that church officials had “doubled the number of Catholics reported to be in the country” by lifting immigrants’ names from the telephone directory.

The Oslo Diocese denied “deliberately trying to cheat the system” in a Feb. 11 statement, when fraud claims were reported in Norway’s Dagbladet Nyheter daily, and said it was already “working hard to get the membership list correct.”

In a Feb. 27 statement, Bishop Eidsvig said he was “very sorry” Catholics were now “confronted with things they bear no responsibility for,” adding his diocese was “in the final stages of a thorough clean-up” and giving police “all necessary information.”

Father Bratbak said the church would complete a “proved membership list” by March 7 after contacting most Catholics directly. He added that up to 10,000 “new Catholics” had now also been identified, but cautioned that many migrant Catholics had no fixed addresses and could therefore not be registered.

“Even if not all our figures were correct, the Catholic Church is still expanding rapidly here, and its prospects are good,” the Oslo church spokesman said. “We think there are still thousands of Catholics for whom we can’t obtain funding, since they come to Mass without registering themselves.”

The Catholic Church makes up a small fraction of the 4.7 million inhabitants of Norway, whose parliament voted in 2012 to end Lutheranism’s 475-year status as official state denomination.

Niels Messerschmidt, spokesman for the Nordic bishops’ conference, said church funding differed in each Scandinavian country. He said the Norwegian system of per capita state subsidies gave churches “a natural interest in registering as many members as possible.”

He said the Danish church, by contrast, received no state support and was funded from voluntary contributions, while the church in Sweden relied on a tax assignment system.

However, he added, the presence of nonregistered Catholic migrants and refugees, particularly from Eastern Europe, posed problems for the church in all countries.

“Having tripled in a decade and built new churches, the Oslo Diocese was viewed as a model for the rest of Scandinavia — if they were really adding names from telephone books, we can now see this was too optimistic,” the bishops’ conference spokesman said.

“But I don’t think anyone will leave the church over this beyond Norway, since this is purely an issue over funding,” he added.