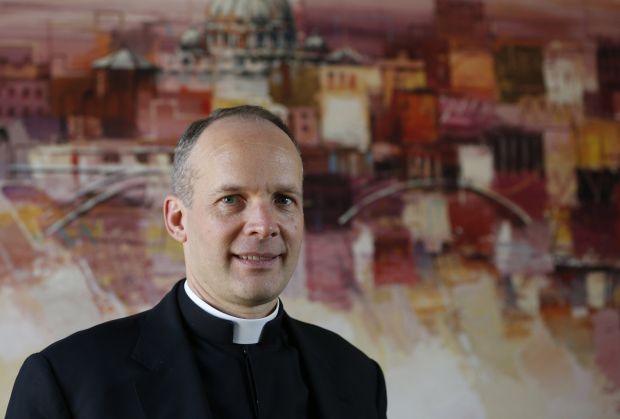 Father Scott Borgman, coordinating secretary of the Pontifical Academy for Life, is pictured at the academy office at the Vatican March 23. Father Borgman grew up in Ivory Coast, worked in Hollywood, Calif., and was ordained for the Diocese of Toulon, France. (CNS photo/Paul Haring)

VATICAN CITY (CNS) — On a movie set in Hollywood, Scott Borgman was hooking a camera to the bottom of a vintage car when he told a fellow key-grip about his decision to go to France and enter the seminary.

“He stopped what he was doing, put the tools down, and said, ‘Scott, I think that is the greatest idea I have ever heard.'”

Thirteen years later, Father Borgman is the coordinating secretary at the Pontifical Academy for Life, which like other pontifical academies, essentially operates as a Vatican think tank; its members are biomedical experts — academics, doctors, scientists, philosophers and theologians — from all over the world.

Father Borgman described the academy as a “consulting arm” for Pope Francis, “a scientific organism for the Holy See.”

“We deal with everything from the beginning [of life] to the end. Over the last two years, our workshops have dealt with end of life care,” he told Catholic News Service. “Our fight is against the idea of a relativistic culture, one that wants to throw away human lives.”

Telling his personal story, Father Borgman repeatedly quoted Scripture passages and used saints’ stories to illustrate his points. He attributed that style of speaking to growing up in the Ivory Coast with his parents, Protestant missionaries who used to bribe him and his siblings with chocolate and ice cream to remember Bible verses.

“My dad taught my siblings and I that God loved us, that he had a specific plan for our lives, and that we would understand that plan better through a personal relationship with Jesus Christ and a knowledge of the Scriptures,” he said.

After moving to California with his family at age 17, Father Borgman studied communications at the Assemblies of God-affiliated Vanguard University, and then worked on movie sets as a key-grip — a rigging and lighting specialist — for nearly eight years.

Eventually, Father Borgman said, “I started looking for meaning, and I felt that God was calling me to something different.” He looked for it in Jackson, Mississippi, where a pastor mentored him, and again when he moved back to Southern California.

As he was searching, his parents joined the Catholic Church, which made him curious. Soon, that curiosity became a sincere interest, and he began attending Mass.

“I didn’t know what was going on at the altar at the beginning, or what the priest was saying or why he was dressed that way. But little by little, after about two years of attending Mass every day, I realized that what was happening at the altar — the celebration of the Eucharist — was exactly what I had learned in the Scriptures as a young boy growing up.”

Father Borgman continued his journey. “One saint said, ‘If you want to be happy, be holy. If you want to be very happy, be very holy.’ It’s that holiness which God calls us to that makes us effective in our lives and find God’s will for us, which is our deepest joy,” he said.

Eventually, his parents moved to France and met a bishop. They introduced their son to Bishop Dominique Rey of Frejus-Toulon, who provided guidance and eventually ordained Father Borgman to the priesthood; he is incardinated in the French diocese.

“The bishop has an incredible energy in terms of the new evangelization,” Father Borgman said.

In January 2014, Father Borgman traveled to California with Bishop Rey to meet with Rick Warren, founder of Saddleback Community Church, one of the largest Protestant churches in the U.S., to “look at innovative parishes” and “talk about outreach in today’s society — how to reach the young,” he said.

Following in the bishop’s footsteps, Father Borgman engages in pastoral work in addition to his duties at the Pontifical Academy for Life. He serves as a chaplain to study-abroad students from Thomas Aquinas College in Santa Paula, California; Florida’s Ave Maria University; and Thomas More College in Merrimack, New Hampshire.

The students, he said, are “well-formed morally, trying to deepen their interior life and invest in their studies. This is the future of the church.”

NEXT: Joy comes from faith, not doctrine, pope says