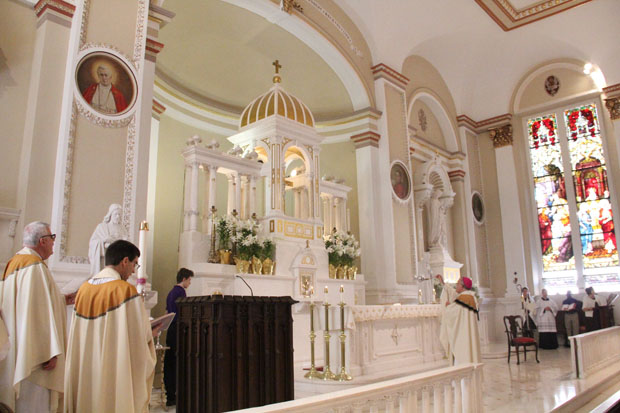 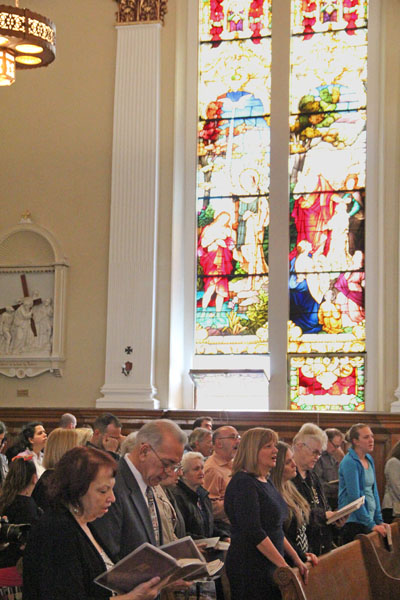 The congregation of young and old pray the liturgy beneath the brilliant windows of St. Philip Church. (Sarah Webb)

St. Philip Neri Parish, in the Queen Village section of Philadelphia, marked its first 175 years with a Mass celebrated by Archbishop Charles Chaput on Sunday, April 19.

For a now-tiny parish it has had a colorful and distinguished history.

What perhaps was most striking about the anniversary liturgy was the remarkable number of families in attendance with very young children — babes in arms, toddlers and early primary school years. Archbishop Chaput took note of this and complimented the families and hoped to see their numbers grow even further.

St. Philip Neri owes its inception to a bequest by prominent layman Andrew Steele, who wished a church to be erected in what was then Southwark, in Philadelphia County but not yet part of the City of Philadelphia.

A first property on Fifth Street was purchased in 1836 but eventually sold in favor of the current location on the 200 block of Queen Street, which from a population standpoint was more centrally located.

Early settlers in the region were Swedish Lutherans. As St. Philip’s pastor, Father James Oliver, noted, Queen Village and Queen Street itself were named in honor of Queen Christina of Sweden, who later abdicated her throne, became Catholic and is buried in St. Peter’s Basilica, Rome.

The parish formally came into being in 1840 as St. Philip de Neri when Coadjutor Bishop of Philadelphia Francis Patrick Kenrick appointed Irish-born Father John Dunn as pastor. Its original boundaries were from Broad Street to the Delaware River; South Street to Passyunk Avenue.

The church was designed by Napoleon LeBrun, a distinguished architect who also helped to design the Cathedral of SS. Peter and Paul and the Academy of Music in Philadelphia, as well as other buildings of note in New York and elsewhere. The cornerstone was laid July 31, 1840 and the church was dedicated by Bishop Kenrick on May 9, 1841. 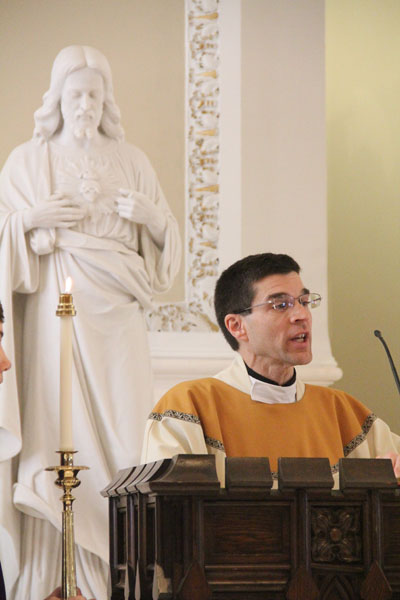 According it the record it was the first “free church” in the region, that is, not financed through pew rentals as was still the general custom. A free parish school with lay teachers was begun in the church basement until the Sisters of St. Joseph arrived to what was their first ministry in Philadelphia.

It was still a very young parish in 1844 when the worst sectarian riots in Philadelphia history broke out, ostensibly pitting Nativists — those born in the United States — against the flood of new immigrants especially Irish Catholic immigrants.

Although there was a great deal of prejudice against Catholics on the part of most Philadelphia Protestants, the real fighting was mostly between Orangeman — Protestant immigrants from Northern Ireland — and Irish Catholic immigrants, with the two groups bringing old grudges as baggage to their new country.

In the first wave of fighting St. Augustine and St. Michael churches, a bit to the north, were burned down in May 1844. In July the rioting spread to Southwark and St. Philip.

The spark for the riot was the discovery that rifles were being stored in the church. Actually they were for protection if attacked and with the permission of Father Dunn, who was a bit of a firebrand.

The church was besieged by a mob who even brought in cannon and it only ended by direct military intervention. Shortly after, Bishop Kenrick, a peaceful man, quietly transferred Father Dunn to a less turbulent area.

Diocesan histories note 14 people died and about 50 were injured during the riot, but it must be added almost all of the casualties were Protestants shot by the soldiers.

On a happier note, by the 1850s some parishes had introduced the 40 hours adoration of the Blessed Sacrament as an occasional devotion. Bishop (now Saint) John Neumann decided in 1853 it should be a diocesan-wide devotion on a regular basis.

At that time, 40 hours meant 40 hours around the clock beginning in the evening of the first day, ending on the morning of the third day. This year, St. Philip will conduct 40 hours May 18-20.

Like most Philadelphia parishes located near the Delaware River, St. Philip was mainly a working class parish and for most of its existence was a home for immigrants from many countries. In 2006 nearby St. Stanislaus Parish, a Polish personal parish, was joined to it.

St. Philip’s remains a small but active parish. In recent years the neighborhood has changed almost beyond recognition with a growing population of young professionals that lends the parish a vibrancy almost unmatched in the city.

“We have about 900 people, 400 registered families,” Father Oliver said. There is a real variety; some families are third, fourth or fifth generation and some young families with children at St. Mary Interparochial or Our Lady of Hope schools.

While some families move away when the children are at school age, “we are seeing more stay,” the pastor said. “We have Bible studies, prayer groups and a small but steady group who come for daily Mass.”

Amy Iacoi moved down to Philadelphia from Rhode Island about nine years ago, and stumbled on the neighborhood while jogging.

“I like the neighborhood and the parish,” she said. “It’s in a big city but it is like living in a small town; you recognize almost everybody walking down the street. I don’t have a lot of family around and the parish is kind of like a family.”

Heidi Micolucci, who attended the anniversary Mass with her husband Richard and children Bruno, 8; Enzo 4 and Matteo, 1, was originally a member of a larger center city parish and really didn’t know anyone at church except for a few neighbors. “Here it seems everybody knows everybody,” she said.

Many of the young professionals in center city move to the suburbs when their children reach school age. In Bruno’s case he is attending nearby private school, and “we want to stay,” his mother said.

Fran Connors and his wife Mary raised four children in Wyncote and then came back to the city four years ago as empty nesters. They describe St. Philip’s as “a lively, vibrant parish; our pastor is dedicated, devoted to the parish and the community,” he said.

But of course there is still that core of old residents, such as Marty Labb who was born, baptized and raised in the parish, attend the school, and still lives on the block where he grew up.

“The parish is the greatest in the world and we’ve been very lucky with our shepherds,” he said. “Sure, the neighborhood has changed, but we’ve kept the status quo and maybe raised it a little bit.”

PREVIOUS: From archives emerges a Catholic who aided Armenians’ plight