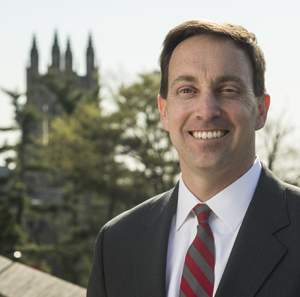 St. Joseph’s University’s board of directors has elected Mark C. Reed as the university’s new president, it was announced April 22. He is the first lay person to lead the Jesuit-run university in its 164-year history.

Currently senior vice president and chief of staff at Fairfield University in Connecticut, the Philadelphia-born Reed is a 1992 graduate of St. Joseph’s Preparatory School who also earned his doctorate in education at the University of Pennsylvania in 2008.

He had earlier earned undergraduate and advanced degrees from Boston College and from Fairfield, where he also is also an adjunct mathematics professor.

“I am honored and humbled to be chosen as St. Joseph’s University’s first lay president,” Reed said. “As a Philadelphia native, I have known and cared about St. Joseph’s all of my life. I am deeply inspired by its Jesuit, Catholic heritage, its reputation for academic excellence and its dedication to serving the surrounding community and the world beyond its borders. I look forward to working with the university’s outstanding faculty and staff to help fully realize its mission.”

He is a past president of the Jesuit Student Affairs Association and recently received Fairfield’s Distinguished Faculty/Administrator Award.

At Fairfield — one of 28 colleges in the United States sponsored by Jesuit priests — Reed leads the university’s largest non-academic division. As the principal adviser to Fairfield president Father Jeffrey P. von Arx, S.J., he is the senior officer of the university and its leadership team, and has been responsible for the execution of multiple strategic plan initiatives.

He has also directly solicited and received funding commitments including a recent $10 million gift to expand and modernize the campus recreation complex.

Preceding his career in higher education, Reed worked as a teacher and administrator in Catholic secondary education. He and his wife Kate and their two young daughters will be relocating to the Philadelphia area this summer.

NEXT: Climate change and pope’s teaching on ecology are focus of talks