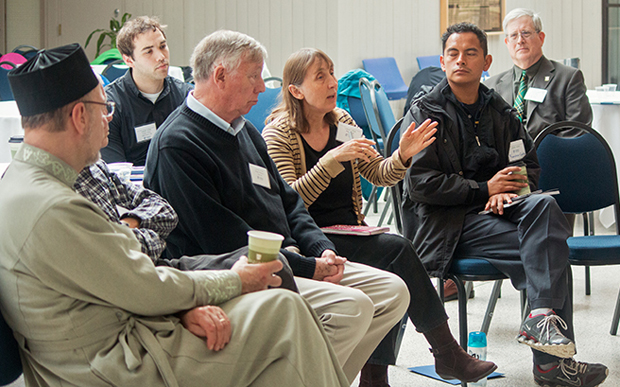 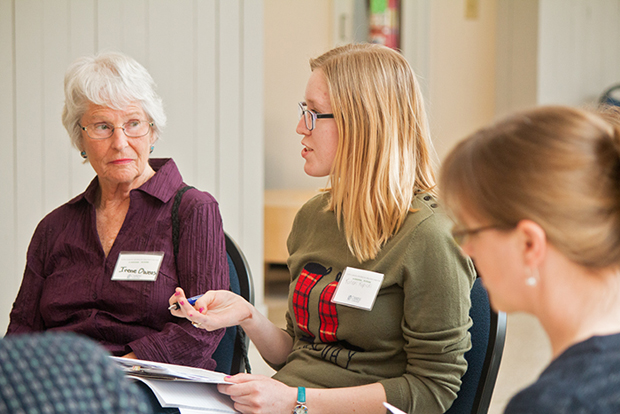 Scientists say the earth’s climate is overheating due to human activity. At the same time, the debate over humanity’s responsibility for climate change, and what to do about it, has become heated too.

Pope Francis’ encyclical letter on the environment, anticipated for early this summer, is expected to become a watershed document in the climate change debate. It’s already drawing attention to the church’s tradition of social teaching, which includes care for the environment.

“The Greening of Catholic Social Teaching” was the title of a keynote address by John F. Burke April 17 at Cabrini College, part of a half-day conference “Faith Climate and Health: Creation Care for a Greener Future” for about 35 participants sponsored by the Pennsylvania Religious Coalition on Creation Care.

Burke, a professor of religious studies at Cabrini, traced what he expected to see in the forthcoming papal document.

A key feature, he believes, will be a linkage between humanity and nature, a relationship that is “at the heart of what it means to be a human person in God’s creation,” he said.

The document will emphasize a triune approach to care for creation – love of God, love of neighbor and love of nature – as forming an “integral relationship with our neighbor,” Burke said. It will also teach how the human person is “to be integral in nature, not a remote observer.”

“We need a heartfelt concern for ecology at the heart of Christian life, not just its periphery,” Burke said.

The real challenge to what he believes will be the pope’s message is for people to embrace in hearts the unified vision of care for creation, poor people and the global economy. “We won’t have a change in policy unless we have a change of heart. We need to move beyond selfishness and see others as our brothers and sisters.”

He added that concern for nature goes hand in hand with care for the poor because environmental degradation and pollution often occur in the poorest neighborhoods in the United States.

Burke based his predictions about the forthcoming encyclical on two sources: a speech by Pope Francis during his trip in January to the Philippines in which he echoed St. John Paul II and Pope Benedict XVI; and a speech by Cardinal Peter Turkson of Ghana in March at a seminary in Ireland.

Cardinal Turkson, president of the Pontifical Council for Justice and Peace, wrote a first draft of the encyclical.

Burke pointed to four major themes of the cardinal’s Ireland speech as a possible outline of the encyclical. They include the reciprocal relationship between creation and the human person; sustainable human development as a moral concern for the poor; how lifestyles of consumption of natural resources and financial investment call for a new global solidarity; and how a change of heart may lead to “the search for a universal common good that is animated by green concerns,” Burke said. 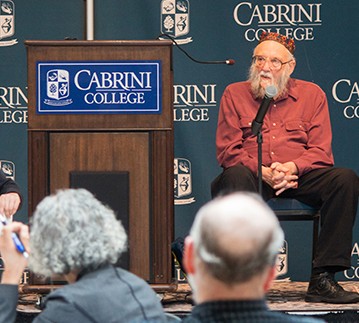 Rabbi Arthur Waskow answers questions after his talk at the conference. Ashley Block)

Following his keynote speech was an address by Rabbi Arthur Waskow of the Philadelphia-based Shalom Center speaking on an “Earth-Oriented Theology of the Hebrew Scriptures.”

He traced biblical accounts of the creation of man and the exodus of the ancient Jewish people from slavery in Egypt to explain the links of God, the human person and creation. (See his blog for details.)

Waskow took a big-picture view of climate change, which he called “a crisis in God’s name.” The rabbi likened the world’s largest energy companies and their production of carbon dioxide-producing gases that are said to be overheating the global atmosphere to the oppressive pharaohs of ancient Egypt.

“In every generation, a pharaoh arises,” he said, adding “Big Oil, Big Coal and the big banking system are the pharaohs of this generation who are oppressing the earth. Every person must look on ourselves as going from slavery.”

He also predicted the coming encyclical by Pope Francis “will make a big difference not only in the Catholic Church,” and said he and other rabbis are working on a “rabbinic letter on ecology to come together with a moral voice” on the issue.

“We are inspired by this encyclical to do it,” he said.

After his talk the conference broke in to small discussion groups on specific topics.

Among them was a talk by Chuck Marshall of Central Baptist church in Wayne about his small, 210-member congregation’s efforts to become a zero-emissions facility, or close to it. He described steps such as installing programmable thermostats, using LED light fixtures, purchasing a more efficient natural gas furnace and replacing traditional light bulbs with more efficient CFC bulbs.

But other approaches Marshall admitted were not as successful, as perhaps a Catholic pastor could attest. Setting the church thermostat to 52 degrees during the week to save energy had a negative effect on the organ, so the temperature was raised to 60.

And even though insulating the high church ceiling would help lower the heating bill, the job would be expensive with little payoff. So instead, “we concentrated on (insulating) rooms that are used five or six days a week,” he said.

Other break-out talks focused on effects associated with climate change including preparing churches for extreme weather and the effects on human health.

In addition to talks by Catholic professors at Cabrini, Rabbi Waskow and an Evangelical Christian pastor, an opening prayer was led by Orthodox Protodeacon Sergei Kapral.

Donna Kopicki and her daughter Kateri, both Orthodox Christians, came down to Cabrini from their home in Wilkes Barre, Pa. As a young teacher, Kateri said “being a positive role model is important to show kids how to maintain care for the environment and for raising awareness” of climate change.

As her mother added, “adults are teaching the young. This is their future and they have to care for the earth.”

Nancy Shevlin did not have as far to travel from her home in Chestnut Hill and Our Mother of Consolation Parish. She was moved by Rabbi Waskow’s references to corporate energy and finance interests.

“Big business is something that really shocks me (and) how powerless we are,” she said. But pointing to the civil rights movement of the 1960s, the issue of climate change today “is an opportunity for us to do something. We can’t deny climate change.”

NEXT: Talk explores deep roots of thinking on environment