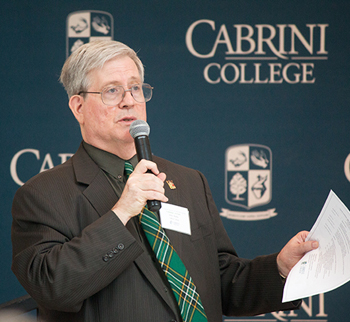 Long before industrial-strength environmental degradation, two monastic traditions could be said to define the Christian approach to the natural world, according to Cabrini College professor John F. Burke in his April 17 talk on historical perspectives on the environment. (Read more about the conference here.)

The first tradition was Benedictine, with a focus on conserving natural resources specifically through agriculture, in the sense that long-range sustainability was the goal in support of cultivating food crops.

The second was the Franciscan approach, which stressed preservation of nature. “Mystical qualities” called for nature, as an aspect of divine creation, to be cared for in its own right and not just for what it can do for man, Burke explained.

He also described the “widespread environmental thinking over the last half-century, ” particularly after the release of the landmark documentary film “Silent Spring,” as rooted in a continuum of thought about nature over the centuries.

Burke traced Christian environmental thinking as ranging from dominion (man exploits nature as a resource) to stewardship (man cares for nature in service to human needs) to creation-centered (man and nature exist in balance) to deep ecology (nature as a medium of the sacred).

On the final point, Burke said a deep ecology approach represents a danger in that creation itself can become an idol.

While the first two may be considered human-centered and the latter two bio-centered, Catholic teaching – especially as presented in chapter 10 of the “Compendium of the Social Doctrine of the Church,” published by the Vatican in 2004 – “straddles the two, leaning toward the creation-centered” approach, Burke said.

He said the encyclical by Pope Francis on the environment, expected to be published this summer, is likely to follow and expand upon consistent church teaching as in the compendium and on the statements of his predecessors, Popes Benedict XVI and St. John Paul II.

“The Catechism of the Catholic Church,” the comprehensive book on Catholic teaching, addresses the relationship between God the creator, orders of creation and the human person.

PREVIOUS: Climate change and pope’s teaching on ecology are focus of talks

NEXT: Ukrainian Catholic cathedral has shroud replica on permanent display