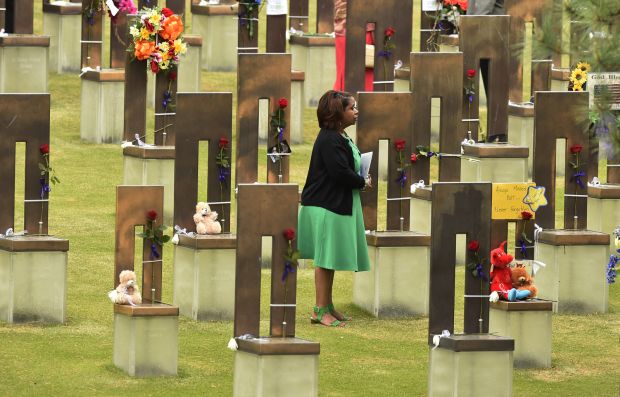 A woman at an April 19 ceremony marking the 20th anniversary of the Oklahoma City bombing stands in the middle of the 168 chairs representing the dead at the Oklahoma City National Memorial & Museum. (CNS photo/Larry W. Smith, EPA)

OKLAHOMA CITY (CNS) — Oklahoma City and the surrounding community found comfort in God after the 1995 bombing of the Murrah federal building and that inspired a “generous spirit” among “many people who took time to care and to comfort one another,” Archbishop Paul S. Coakley said April 19.

That “spirit of caring and kindness” has come to be called “the Oklahoma Standard,” the archbishop said, praying at a service to mark the 20th anniversary of the deadliest terrorist attack on U.S. soil until 9/11.

“In our darkest hour, you revealed your presence in countless ways as ‘Emmanuel,’ ‘God with us.’ You are with us still,” added Archbishop Coakley, who heads the Oklahoma City Archdiocese.

A nearly 5,000-pound truck bomb delivered the blast that destroyed the federal building, killed 168 people and injured hundreds of others. Those who died are memorialized in a field of empty chairs at the Oklahoma City National Memorial & Museum, built where the Alfred P. Murrah building once stood.

An estimated 2,500 people attended the 90-minute service, which opened with a period of silence lasting 168 seconds to honor each person who died and closed with the reading of the names of those killed.

“Lord God, we lift our hearts in prayer and remembrance this day. We praise you for your faithfulness and love. We are standing on holy ground,” Archbishop Coakley said. “This place has been consecrated and made forever sacred by the lives of your children who suffered and died here, and by the countless acts of kindness and service of so many who came to the aid of their neighbors, co-workers, friends and even strangers 20 years ago today.”

He thanked God for “the gifts of healing so graciously bestowed on countless individuals and families in this community” and for the “many signs of recovery and rebirth in this great city that was brought to its knees by the violent events of April 19, 1995.”

“Lord, because we have experienced your faithfulness in our darkest hours, we turn to you in hope this day,” Archbishop Coakley continued. “Help us to cherish the memory of lost loved ones, but also to cherish the lessons we have learned about kindness and compassion and caring for one another.”

He prayed that Oklahoma City would continue to be “a beacon of hope, of healing and reconciliation for all people. … We pray especially that violence and hatred will never rule our hearts, but will always be overcome by mercy and forgiveness and compassion.”

In his remarks, Clinton, who was the nation’s chief executive, when the bombing occurred, told the crowd how he had prepared for the anniversary service — “by taking Hillary (his wife) to see our daughter and son-in-law and my about-to-be 7-month-old grandchild” in New York.

“And Hillary and I bathed her and fed her and put her to bed, and I looked at her in that crib so I could remember how you felt, those of you who lost your loved ones,” he said.

Among the fatalities that day in 1995 were 19 children, most of whom were in a day care center for federal employees in the Murrah building.

Keating, who was governor at the time, said the bombing left “a place of unspeakable horror and tragedy.”

Timothy McVeigh was arrested about 90 minutes after the explosion. An identification number on the rented truck was quickly traced to a rental agency in Kansas, where workers helped an FBI artist create a sketch of the renter, who used an alias. The sketch was shown in the Oklahoma City area and the manager of a local motel identified the sketch as McVeigh, who later admitted to placing the bomb.

McVeigh was found guilty in 1997 and executed June 11, 2001, at age 33 at a federal prison in Indiana, even as Catholic and other opponents of the death penalty protested against his execution.

A co-conspirator, Terry Nichols, was sentenced to life in prison, and a third conspirator, Michael Fortier, received a 12-year term and was released from prison in 2006.

The explosion demolished a third of the Murrah federal building and damaged hundreds of other structures in 16 surrounding blocks.

One nearby building was St. Joseph’s Old Cathedral. The explosion raised the roof several inches off its steel pillars and broke several of the rafters. Plaster fell from the walls and ceiling and the painted, symbolic plaster medallions were destroyed. Most of the stained-glass windows on one side of the church were shattered, and the pipe organ was extensively damaged.

Closed for two years of renovations, it was rededicated in December 1997.

In an interview with Catholic News Service shortly after the bomb blast, Father Louis J. Lamb described having entered the shattered interior of the church to find a light that told him the church must maintain a presence downtown.

Amid fractured rafters, debris, shattered pieces of stained glass and a thick covering of wall plaster and dust, a lone candle remained lit. It was the vigil light near the tabernacle.