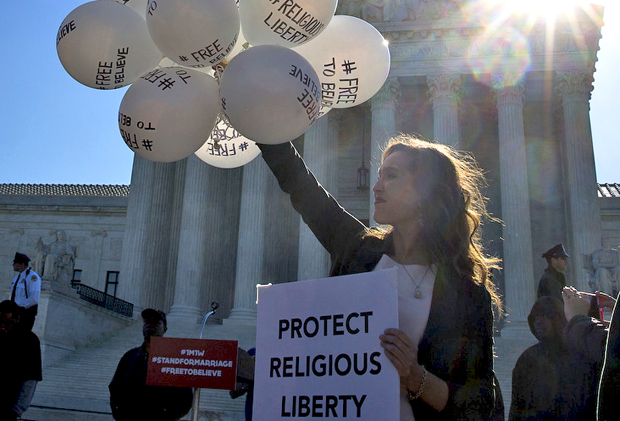 UPDATED – WASHINGTON (CNS) — The questions raised by Supreme Court justices as they considered April 28 whether they should rule that same-sex marriage should be made legal nationwide covered a gamut of rights concerns — religious, equal protection, states’ ability to enact their own laws.

In two and a half hours of oral arguments, the line of questions and the answers by attorneys representing both sides made clear that all concerned recognize the potential for the court’s ruling to be history-making.

“The issue is not whether there should be same-sex marriage, but who should decide,” said Justice Antonin Scalia in an exchange with Mary Bonauto, attorney for James Obergefell and other petitioners seeking the right to have same-sex marriage allowed or recognized in their states.

“And you’re asking us to decide it for this society when no other society until 2001 ever had it,” Scalia added.

Chief Justice John Roberts observed that the country has moved quickly from firm opposition to such marriages — and a nationwide prohibition on them — to the current status of broad acceptance and a majority of states allowing same sex marriage. Numerous legal observers have drawn a connection between the marriage cases and the speed with which the nation had to accept the legality of abortion when the court ruled in 1973 that it is constitutionally protected. They suggest that a constitutional finding in favor of same-sex marriage would similarly preempt voters’ rights to decide such a complex moral issue.

“If you prevail,” he told Bonauto, the nationwide legal debate about the issue will be over, but the people who are still making up their minds how they feel about same sex marriage will be deprived of the chance to weigh in about how their states act.

“People feel very differently about something if they have a chance to vote on it than if it’s imposed on them by the courts,” Roberts said.

Justice Anthony Kennedy, who often is a swing vote in cases that divide along liberal/conservative lines, and Justice Samuel Alito also raised several questions about the speed with which same-sex marriage has become accepted and whether the court should be wading in to find a constitutional right at this time.

Kennedy said the 10-year period over which U.S. states have begun to allow same-sex marriage is a short amount of time on which to base a ruling to change that.

“This definition has been with us for millennia,” he said. “And it’s very difficult for the court to say, oh, well, we know better.”

Alito observed that, “until the end of the 20th century, there never was a nation or culture that recognized marriage between two people of the same sex. Now, can we infer from that that those nations and those cultures all thought that there was some rational, practical purpose for defining marriage in that way, or is it your argument that they were all operating independently, based solely on irrational stereotypes and prejudice?”

Bonauto said in response that “times can blind.” For example, discrimination on the basis of sex was assumed to be constitutionally protected, she said, and it took more than 100 years for the court to find otherwise.

Justice Ruth Bader Ginsburg pointed out that the cases seeking reversal of rulings that upheld state bans on same-sex marriage wouldn’t be up for the court’s consideration “if marriage was what it was a millennium ago.” She gave the example of another change in how marriage is understood, citing times when a woman’s role in a marriage was subservient to the man’s decisions. “There was a change in marriage to make it egalitarian when it wasn’t egalitarian.”

Bonauto expanded on that, saying that for centuries the U.S. and Europe had a system “where a woman’s legal identity was absorbed into that of her husband and men and women had different prescribed legal roles. And again, because of equality and changing social circumstances all of those gender differences in the rights and responsibilities of the married pair have been eliminated. And that, of course, is a system in which committed same-sex couples fit quite well.”

Scalia also raised questions about whether clergy would be required to participate in same-sex marriages that violate their religious beliefs. “You could have ministers who conduct real marriages that are civilly enforceable at the National Cathedral (run by the Episcopal Church) but not at St. Matthew’s (Catholic) downtown because that minister refuses to marry two men and therefore cannot be given the state power to make a real state marriage. I don’t see any answer to that. I really don’t.”

No ministers in states with same-sex marriage have been forced to preside at marriages they don’t wish to perform, Bonauto said. But Scalia persisted, saying that if such marriages are constitutionally protected, they will have to do so.

Justices Elena Kagan and Stephen Breyer stepped into the issue.

“There are many rabbis that will not conduct marriages between Jews and non-Jews, notwithstanding that we have a constitutional prohibition against religious discrimination,” she said. “And those rabbis get all the powers and privileges of the state.”

The attorney representing the states that want to keep their bans on same-sex marriage, Michigan’s special assistant attorney general John J. Bursch, argued that if the court finds a constitutional right to such marriages, it would lead to fewer marriages between heterosexual couples and therefore fewer children being raised in two-parent households.

“There’s harm if you change the definition because, in people’s minds, if marriage and creating children don’t have anything to do with each other, then what do you expect? You expect more children outside of marriage.” That’s why, he said, the state must follow through with its obligation to protect children by keeping marriage defined in the way that lends itself to parents raising their own biological children.

“We’re talking about something that’s going to change the meaning of the institution over generations,” Bursch said. “You have things like no-fault divorce where we tweaked what marriage means and it had consequences over the long term that some people didn’t expect.”

In the second question the court took up, whether states that don’t permit same-sex marriages are obligated to recognize such unions performed in other states, attorney Douglas Hallward-Driemeier repeatedly referred to his clients’ marriages being dissolved by the states where they live.

“These petitioners have built their lives around their marriages, including bringing children into their families, just as opposite-sex couples have done,” Hallward-Driemeier said. “But the non-recognition laws undermine the stability of these families.”

He and attorney Joseph F. Whalen, associate solicitor general of Tennessee, who was defending several states’ rights to not recognize same-sex marriages, both agreed that if the court rules in the first question that there is a constitutional right to such unions, their cases become moot.

That portion of the argument batted around questions of when a state may decide a marriage recognized in one state can be ignored in another.

Whalen said before the question of same-sex marriages came up the last time Tennessee had refused to recognize another state’s marriage was in 1970, in a case involving a marriage of a stepfather and stepdaughter.

The court was weighing four cases from Tennessee, Michigan, Kentucky and Ohio.

All four cases under review are all from the 6th U.S. Circuit Court of Appeals, which ruled in November that laws prohibiting same-sex marriage are constitutional. That 2-1 ruling came in the case of a lesbian couple in Michigan who sought to jointly adopt the special needs children they are raising together. The state will not allow adoption by couples that are not married and it prohibits same-sex marriage.

The opinion said that although it is inevitable that same-sex marriage will be allowed nationwide, it is better to make that change through a political process, rather than a court ruling. The 6th Circuit was the first federal appeals court to find in favor of such bans. Four other federal appellate courts have found same-sex marriage prohibitions to be unconstitutional.

The court bundled the appeals under the title of the Ohio case, Obergefell v. Hodges. That case arose after the October 2013 death of John Arthur of Cincinnati. He and his longtime partner, Obergefell, had married earlier that year in Maryland. When the local Ohio registrar agreed to list Obergefell as the surviving spouse on Arthur’s death certificate — which is key to a range of survivor’s benefits — the state attorney general challenged the status because Ohio law bars same-sex marriages.

The other cases under consideration include: Tanco v. Haslam, the Tennessee case, and Bourke v. Beshear, the Kentucky case, which similarly challenge those states’ refusal to recognize same-sex marriages performed in other jurisdictions, and DeBoer v. Snyder, the Michigan adoption case.

The U.S. Conference of Catholic Bishops was among Catholic organizations that filed “amicus” or friend-of-the-court briefs urging the justices to maintain the definition of marriage as applying just to one man and one woman.

As of late April, 37 states and the District of Columbia allow same-sex marriages, most due to federal and state court rulings.

The court’s ruling is expected before it adjourns for the term in late June.

PREVIOUS: Advocates on either side of marriage case make presence felt

NEXT: Catholics join efforts to heal, clean up, move forward in Baltimore