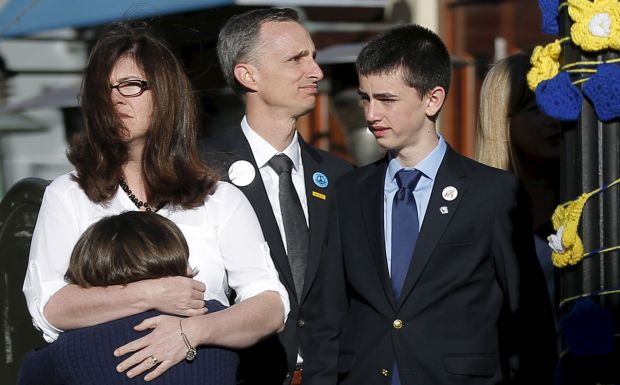 The family of Boston Marathon bombing victim Martin Richard are seen during an April 15 ceremony at the site of the second bomb blast on the second anniversary of the attack. Martin was killed just a few days shy of his ninth birthday. (CNS photo/Brian Snyder, Reuters)

BOSTON (CNS) — The parents of Martin Richard, the youngest victim killed in the Boston Marathon bombings two years ago, are asking that the death penalty be taken “off the table” for Dzhokhar Tsarnaev.

On April 8, Tsarnaev was found guilty on all 30 counts related to the attack that killed three people and severely injured 260 others at the finish line of the 2013 marathon.

The penalty phase of the trial began April 21 at the U.S. District Court in Boston and was expected to last about four weeks. Jurors will decide between sentencing Tsarnaev to death or to life without parole.

In a letter published in the Boston Globe April 17 titled “To end the anguish, drop the death penalty,” Bill and Denise Richard asked that the Department of Justice bring the case to a close.

“We are in favor of and would support the Department of Justice in taking the death penalty off the table in exchange for the defendant spending the rest of his life in prison without any possibility of release and waiving all of his rights to appeal,” they wrote.

“We understand all too well the heinousness and brutality of the crimes committed. We were there. We lived it. The defendant murdered our 8-year-old son, maimed our 7-year-old daughter, and stole part of our soul,” they wrote.

Their son Martin died in the attack just shy of his ninth birthday.

“We know that the government has its reasons for seeking the death penalty, but the continued pursuit of that punishment could bring years of appeals and prolong reliving the most painful day of our lives. We hope our two remaining children do not have to grow up with the lingering, painful reminder of what the defendant took from them, which years of appeals would undoubtedly bring.”

The Richards acknowledged their decision is a “deeply personal issue” and that they can only speak for themselves but they state their belief that “now is the time to turn the page, end the anguish, and look toward a better future — for us, for Boston, and for the country.”

As Tsarnaev’s trial was concluding, the Catholic bishops of Massachusetts released a statement reiterating the church’s teaching on the death penalty: The Catholic Church opposes capital punishment except “if this is the only possible way of effectively defending human live,” but says such circumstances are very rare if nonexistent.

The Richards belong to St. Ann Parish in Dorchester.

At Tsarnaev’s trial, the prosecution presented evidence that he and his older brother, Tamerlan, planted the bombs that exploded near the finish line at the marathon, killing not only young Martin but also 29-year-old Medford native Krystle Campbell, and Lu Lingzi, 23, a Chinese national studying at Boston University. Later, the pair killed Massachusetts Institute of Technology police officer Sean Collier as they attempted to make an escape from the Boston area.

Tsarnaev’s defense attorneys argued that 26-year-old Tamerlan, who died following a gun fight with police after Collier was slain, was the mastermind of the bombings and his younger brother, who was 19 at the time, took part only out of a sense of loyalty to his brother.

According to an AP story, his attorneys were expected to use the same line of defense during the penalty phase, while prosecutors pushed for the death penalty, arguing, as they did at trial, that Tsarnaev was an equal partner in the bombings.

On April 20, this year’s Boston Marathon took place with an estimated 30,000 participants, running under watchful security along the route.

Four-time winner Bill Rodgers told AP before this year’s race that the 2013 bombings are now part of the run’s history but after the tragedy, he said, “the public got to see what the Boston Marathon really stands for, and how the Boston area came together.”

Everyone expected this year’s event to be “a wonderful celebration, just like it has always been,” he added.

NEXT: Alito halts HHS mandate for Pittsburgh and Erie dioceses