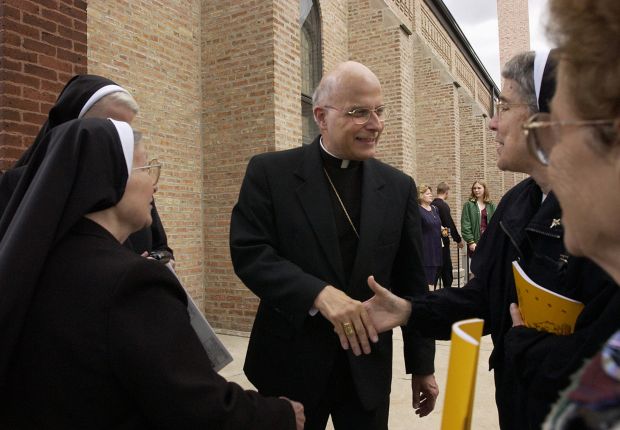 UPDATED — CHICAGO (CNS) — Cardinal Francis E. George, the retired archbishop of Chicago who was the first native Chicagoan to head the archdiocese, died April 17 at his residence after nearly 10 years battling cancer. He was 78.

Cardinal George’s funeral Mass is to be celebrated at noon April 23 at Holy Name Cathedral, followed by a committal service at All Saints Cemetery in Des Plaines. The cardinal wished to be buried in the George family plot.

Prior to the funeral, Cardinal George’s body is to be received at Holy Name Cathedral the afternoon of April 21. The rite of reception is to be followed by a four-hour visitation period for the public, a prayer vigil for priests and seminarians, with visitation again open to the public from 9 a.m. to 11 p.m. (local time), when the cathedral closes.

On April 22, morning visitation is to be followed by an interfaith service — both open to the public. Visitation resumes, then a prayer vigil is planned for women and men religious, and deacons and their wives. Visitation and a vigil conducted by lay ecclesial movements takes place for the public through the night at the cathedral.

In an April 18 message to Archbishop Cupich, Pope Francis expressed his condolences to all in the Chicago Archdiocese and imparted his apostolic blessing. He recalled Cardinal George’s “witness of consecrated life” as a Missionary Oblate of Mary Immaculate, “his service to the church’s educational apostolate,” and his years of episcopal ministry.

“I join you in commending the soul of this wise and gentle pastor to the merciful love of God our heavenly Father,” said the pope.

In Philadelphia, Archbishop Charles J. Chaput said in a statement April 17 that he was deeply saddened over news of Cardinal George’s death.

The cardinal “was a close friend over many years, from the time I was a young bishop in Rapid City. We talked often. He was a constant source of good counsel and encouragement,” the archbishop said. 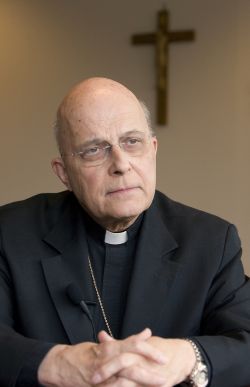 Cardinal Francis E. George of Chicago, then president of the U.S. Conference of Catholic Bishops, poses for photo in 2010. (CNS photo/Bob Roller)

“As a fellow religious, he was a model for me of living the Beatitudes well, despite the daily crush of leading a large local Church. As a bishop and a scholar, he was the finest intellect the Church in America has seen in many decades. The only consolation in losing him is knowing that he served the Lord well, and the Lord has welcomed him home.

“On behalf of the Church in Philadelphia, I extend prayerful condolences to Cardinal George’s family and many friends as well as Archbishop Blase J. Cupich and the priests, religious, and lay faithful of the Archdiocese of Chicago.

“I ask the people of the Archdiocese of Philadelphia to offer prayers for Cardinal George, and our priests to offer Masses for the repose of his soul. All of us are very grateful for the gifts of his life and service to the Universal Church.

“May God grant him the gift of eternal life, and give peace and consolation to all those who loved, admired, and respected him.”

Cardinal George led the Church in Chicago as archbishop for 17 years before becoming the first to resign from the archdiocese, as Pope Francis accepted his resignation in November 2014. He was succeeded by Archbishop Cupich, who called Cardinal George “a man of peace, tenacity and courage” in a statement he read April 17 at a news conference held outside Holy Name Cathedral to announce the death.

Archbishop Cupich singled out Cardinal George for overcoming many obstacles to become a priest, and “not letting his physical limitations moderate his zeal for bringing the promise of Christ’s love where it was needed most.”

A childhood bout with polio had left the prelate with a weakened leg and a pronounced limp throughout his life.

Cardinal George was a philosophy professor and regional provincial then vicar general of his religious order, the Missionary Oblates of Mary Immaculate, before being named a bishop in 1990.

He was named bishop of Yakima, Washington, in 1990, then was appointed archbishop of Portland, Oregon, in April 1996. Less than a year later, St. John Paul II named him to fill the position in Chicago, which was left vacant by the death of Cardinal Joseph Bernardin in November 1996.

The cardinal was a leader of the American Catholic bishops’ response to the breaking clergy sexual abuse scandal in 2002. Archbishop Cupich in his statement noted that when the U.S. church “struggled with the grave sin of clerical sexual abuse, (Cardinal George) stood strong among his fellow bishops and insisted that zero tolerance was the only course consistent with our beliefs.”

The cardinal also became a leading voice against threats to religious freedom. In September 2014 he wrote a powerful critique on the topic. At the time Archbishop Chaput had called the cardinal “among the most articulate Catholic voices in the United States.”

Cardinal George first received a diagnosis of cancer in 2006. After surgery to remove his prostate and bladder, the cancer recurred in 2012 and he underwent more surgery.

After retiring in 2014, Cardinal George accomplished what he often joked was his aspiration, to be the first cardinal-archbishop of Chicago to step down from the job, rather than dying in office, as his predecessors had. In the last few months the archdiocese had issued a series of press releases about changes in Cardinal George’s health status as it declined.

At an event Jan. 30 where he received an award from the Knights of Columbus, Cardinal George spoke frankly about living with terminal illness, saying that his doctors had exhausted the options for treating his disease and that he was receiving palliative care.

“They’ve run out of tricks in the bag, if you like,” he said at the time. “I’m in the hands of God, as we all are in some fashion.”

Late last month, he was readmitted to a hospital to better manage his pain medications.

In a catechesis session during World Youth Day in Dusseldorf, Germany, in 2005, Cardinal George told the youths that having polio at the age of 13 left him, “a captive in my own body. I soon learned that self-pity got me nowhere. Faith was the way out, because in faith I was not alone, and good can come of something that appears bad at that time.”

Archbishop Cupich observed that Cardinal George had offered his counsel and support to three popes, serving the worldwide church. With the cardinal’s death, the College of Cardinals has 223 members, of whom 121 are under 80 and thus eligible to vote for a pope.

In Chicago, the archbishop noted, the cardinal “visited every corner of the archdiocese, talking with the faithful and bringing kindness to every interaction.”

Funeral arrangements for the cardinal were pending.

Cardinal George was president of the U.S. Conference of Catholic Bishops for three years, from 2007 to 2010, which made him the public face of the bishops’ efforts to help shape what became the Affordable Care Act. In his final address to the body of bishops as their president in November 2010, he criticized those who define the church’s usefulness by whether it provides “foot soldiers for a political commitment, whether of the left or the right.”

He recalled at length the public debate over what the legislation should include and referred to the “wound to the church’s unity” caused by disagreements over the final bill.

The USCCB opposed the final version of the bill, saying it would permit federal funding of abortion, inadequately protect the conscience rights of health care providers and leave out immigrants. Other Catholic groups, including the Catholic Health Association and many groups of women religious disagreed and supported the bill. The bishops’ also objected to the federal contraceptive mandate that is part of the health care law, requiring most employers, including religious employers, to cover contraceptives over their moral objections.

In that same speech, Cardinal George also touched on worries about Christians in the Middle East, his voice catching as he related the story of a child who was murdered during a massacre at a Baghdad Catholic church.

The future cardinal was born in Chicago Jan. 16, 1937, to Francis J. and Julia R. (McCarthy) George. He attended St. Pascal elementary school on Chicago’s northwest side, the parish where he would be ordained a priest Dec. 21, 1963.

After being rejected by the archdiocesan seminary because of his disability, he instead attended the Oblate-run St. Henry Preparatory Seminary in Belleville, Illinois. He entered the Missionary Oblates of Mary Immaculate Aug. 14, 1957.

After his ordination, much of Cardinal George’s work was in academia, teaching at the Oblate Seminary in Pass Christian, Mississippi, at Tulane University and Creighton University in Omaha, Nebraska. In 1973, he became provincial superior of the Midwestern province of the Oblates, based in St. Paul, Minnesota. The following year he was elected vicar general for the order, and served in that post in Rome from 1974 to 1986.

When he returned to the United States, he became coordinator of the Circle of Fellows for the Cambridge Center for the Study of Faith and Culture in Massachusetts from 1987-1990.

Cardinal George participated in two conclaves. The first was in 2005 to elect a successor to St. John Paul II in 2005 — Pope Benedict XVI — and the second in 2013 in which Pope Francis was elected.

Besides his term as president of the USCCB, Cardinal George served on its committees on Divine Worship, Evangelization and Catechesis, Doctrine, Latin America, Missions, Religious Life and Ministry, Hispanic Affairs, Science and Values, African-American Catholics and was the USCCB representative to the International Committee on English in the Liturgy from 1997 to 2006.

Among other activities, Cardinal George served as chancellor for the Catholic Church Extension Society and the University of St. Mary of the Lake in Mundelein; as a member of the board of trustees of The Catholic University of America, the Papal Foundation, the National Catholic Bioethics Center, the National Catholic Office for Persons with Disabilities and numerous other organizations.

In addition to English, he spoke French, Italian, Spanish and German.

Cardinal George is survived by one sister, Margaret Cain of Grand Rapids, Michigan, as well as nieces and nephews.

NEXT: Cardinal George recalled as a man of intellect, faith, simplicity