ALBANY, N.Y. (CNS) — Mercy Sister Mary Ann Walsh, who went from hometown schoolteacher to Vatican correspondent, lived out her drive to be a writer even in her last days. She died April 28 in her hometown of Albany, New York, after a battle with cancer. 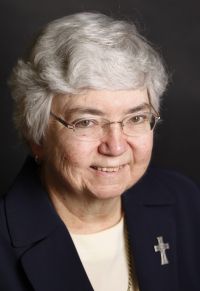 Mercy Sister Mary Ann Walsh, 68, a writer in the Catholic press and longtime spokeswoman for the U.S. bishops, died April 28 in Albany, N.Y. She is pictured in a 2012 photo. (CNS photo/Bob Roller)

Sister Mary Ann, 68, had stepped down last summer from her role of 21 years in media relations for the U.S. Conference of Catholic Bishops, the last six years as director. Just as she began a transition to a new job she quickly came to love — writing for America Magazine as the Jesuit publication’s U.S. church correspondent — she learned that she had fast-growing metastatic cancer and moved home to the motherhouse in Albany where she had entered the Sisters of Mercy 50 years earlier.

Over the next nine months as her health declined, Sister Mary Ann wrote obliquely about her own impending death, such as in a piece about the “underutilized sacrament of anointing of the sick,” shortly after she hosted a gathering of friends as she received the sacrament herself.

Her articles included observations about journalism, politics, civility in society, the effects of youth sports schedules on families that attend church and many other topics. In her last blog, published March 25, Sister Mary Ann tackled the topic of the need for mercy, as Pope Francis declared a jubilee year of mercy beginning in December.

In interviews with Catholic News Service and for the Sisters of Mercy, she talked frankly about the progression of her cancer and the inevitability of its outcome, though never complaining and always with appreciation for the outpouring of support she was getting.

As word spread of her death, tributes were effusive from people who knew and worked with Sister Mary Ann.

Reporters, colleagues and bishops praised her deep faith, her determination, her trail-blazing as a woman and a nun and her abiding friendship.

In addition to being a good friend and gifted writer, said Susan Gibbs, a public relations professional who was formerly spokeswoman for the Archdiocese of Washington, Sister Mary Ann “helped break the marble ceiling for women in the church.”

Phil Pullella, senior correspondent in Italy and the Vatican for Reuters told of his friendship with Sister Mary Ann that began when she was a reporter in Rome for Catholic News Service.

“I always called her ‘Mother Mary’ and she always called me ‘my son,'” he said in a note to CNS. “Mary Ann was an exceptionally generous woman. … When she moved to America magazine, she wrote some of the clearest insightful, informed and entertaining columns about the U.S. church that I have ever read.”

Archbishop John Wester, bishop of Salt Lake City, who will become archbishop of Santa Fe, New Mexico, in June, visited Sister Mary Ann in March, presenting her with the St. Francis de Sales Award, the highest honor given by the Catholic Press Association. He is chairman of the U.S. bishops’ Committee on Communications.

Archbishop Wester said he has “the deepest respect for her integrity and her love for the church. She was a clear thinker who could write persuasively and in a captivating manner.”

Like many others, he commented on her “clever wit” and her ability to “read people’s hearts with ease.”

Sister Mary Ann was born in Albany, Feb. 25, 1947, the only daughter of Irish immigrants. After attending local Catholic schools staffed by the Sisters of Mercy, she entered the order as a 17-year-old. She earned degrees in English at the College of St. Rose in Albany and began teaching elementary and then high school.

But the writing bug, which had led her as a child to stay up late, scribbling beneath the bedcovers under the light of a gooseneck lamp, soon led her to a reporting job at The Evangelist, newspaper of the Albany Diocese.

She went on to become a Vatican correspondent for Catholic News Service and then its media editor. In those roles, she traveled the world with Pope John Paul II and sat down for interviews with movie stars, including Raul Julia, Gene Hackman and Bruce Willis.

“Rome taught me how to cover Hollywood,” she told CNS in interviews in January. “They’re both complete bureaucracies.”

Her career path led her to the media relations staff of the USCCB, where she managed arrangements for press coverage of World Youth Day in Denver in 1993, for several other visits to the U.S. by St. John Paul II and Pope Benedict XVI, and for the ins and outs of news about the U.S. church, from the sex abuse crisis to the annual meetings of the U.S. bishops.

In addition to her news and blog writing, Sister Mary Ann also was the author or editor of several books about Popes John Paul II and Benedict XVI as well as producer of two videos.

Cardinal J. Francis Stafford, retired archbishop of Denver, who was there at the time of World Youth Day, said in a note to CNS that he was impressed by her quick grasp of the potential of the event, especially “of the human and spiritual attractiveness of Pope John Paul II among young people. On both counts, she was among the early few. I felt that the pope and Sister Mary Ann were kindred spirits. They were both hopeful for the future.”

Her most recent boss, Jesuit Father Matt Malone, editor-in-chief of America, insisted on keeping Sister Mary Ann working as much as she wanted to through the course of her illness. Some friends observed that at times it seemed like the need to write was keeping her alive.

In a note to CNS, Father Malone called Sister Mary Ann “a valued colleague and friend, a writer of exceptional talent and insight, whose faith animated her entire life. As the first female religious to serve on the editorial staff of America, Sister Walsh was a trailblazer even in this last phase of her professional life, a career that spanned four impressive decades. Our readers, especially, will miss her expertise, her generosity and her honesty.”

Mercy Sister Kathleen Pritty had been friends with Sister Mary Ann since they joined the religious order at about the same time. Both graduated from Vincentian Institute, the Albany high school that was staffed by the Mercy sisters.

Sister Kathleen said Sister Mary Ann remained steadfast as she worked within the church during tumultuous times, including the scandal of sexual abuse cases and the Vatican investigation of the Leadership Conference of Women Religious.

“She has been so faithful to the church,” said Sister Kathleen, observing that it surely was difficult for her friend to be a spokeswoman for the bishops’ conference during such times. “The church has not had a more faithful daughter than her.”

Sister Mary Ann’s niece, Maura Sommer, said in an email to CNS that she was “thankful that God ended her suffering and I am certain that she went through the E-ZPass lane at the gate (of heaven). Mary Ann met her challenges head on with strength and faith and has now started a new chapter — or probably in her case, her next book, ‘Heavenly Reward.'”

Across the Atlantic, the Vatican newspaper, L’Osservatore Romano, carried a story on Sister Mary Ann’s death, focusing on her love of journalism.

Author Giulia Galeotti called her “one of the most volcanic, determined and calm women I ever had a chance to dialogue with.”

She concluded the piece by saying “it was thanks to Sister Walsh that the world got to know another face of the U.S. church — that of a united, smiling, welcoming and proud church ready to open itself and to dialogue after the storm of the (sexual abuse) scandals.”

Norma Montenegro Flynn, assistant director of media relations at the USCCB, commented on the combination of Sister Mary Ann as a professional mentor and source of spiritual strength.

While going through a difficult pregnancy, Montenegro said she asked Sister Mary Ann about whether she could have a blessing for her unborn baby.

“Her face lit up and she encouraged me to invite family and friends and work friends. She then blogged about it.”

After assuring Montenegro that she was keeping her in her prayers, once the baby was born Sister Mary Ann rearranged her travel to be sure she could attend the baptism of her son.

“She had bonded with my baby through prayer,” Montenegro said. “She had a heart of gold and a sweetness and caring heart that was genuine. I will always be grateful to have worked and learned from her. Professionally, she always strived for perfection, and through her example she inspired me to give the best I can and do the best I can.”