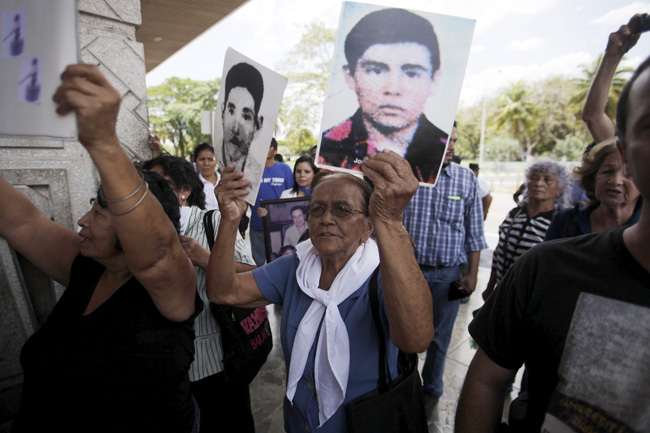 Relatives of war victims protest against retired Gen. Carlos Eugenio Vides Casanova, a former director of the Salvadoran national guard, upon his arrival at El Salvador International Airport April 8. Casanova was deported from the United States for his alleged involvement in torture and killings during the 1979 to 1992 civil war in El Salvador. (CNS /Jose Cabezas, Reuters) 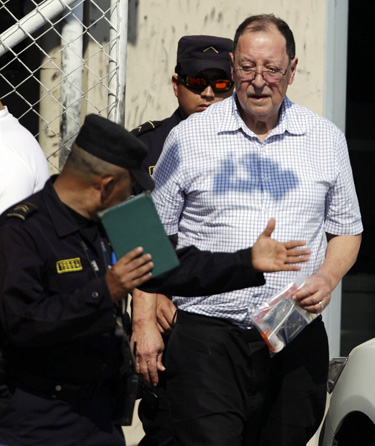 Officials said at the time deportation proceedings can be a slow process, and Garcia’s deportation order remains under appeal.

According to Reuters and other news reports, Casanova was arrested at his home in Palm Coast, which is north of Daytona Beach. He had lived there as a legal resident since 1989.

Casanova and Garcia were both accused of human rights abuses during the bloody civil war in El Salvador, which lasted roughly from 1979 to 1992.

Many civilians left the tiny Central American country and fled for protection to the United States, Europe and Australia, among other places. Others were “disappeared” and have never been found.

In 2002, Casanova and Garcia were found guilty in a civil trial for the torture of three Salvadorans, and ordered to pay $54.6 million to the victims.

James Green, a West Palm Beach attorney, told Catholic News Service last year when the deportation order was made public that such action by the U.S. government is something the U.S. “has only begun doing in the past 10 years against known human rights violators.”

Green was not involved in the deportation proceedings but was a co-lead council that won the monetary award from Garcia and Casanova for the survivors of the Salvadoran civil war who sued them.

“Putting aside those who conspired with and implemented extermination of the Jewish population during World War II and before, this is one of the first times the United States has used immigration policy to exclude former allies whose human rights policies were in violation of the Universal Declaration of Human Rights,” Green told CNS.

“Garcia never took any responsibility whatsoever for his actions; he never took responsibility for any of the widespread abuses of human rights occurring daily and hourly under his understand,” he continued. “In many ways, he and Casanova turned a blind eye — mostly they were encouraging violence against unarmed civilians.”

PREVIOUS: End of extreme global poverty in sight by 2030

NEXT: Obama and Castro take next steps to normalize U.S.-Cuba ties