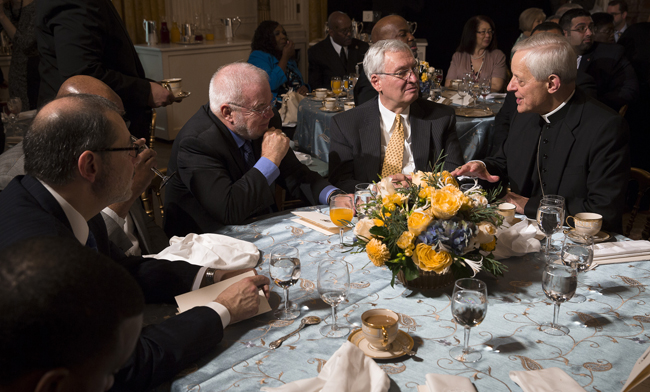 Cardinal Donald W. Wuerl of Washington, right, talks to Leith Anderson, president of the National Association of Evangelicals, and the Rev. Jim Wallis, president of Sojourners, during an Easter prayer breakfast in the East Room of the White House in Washington April 7. (CNS photo/Tyler Orsburn) 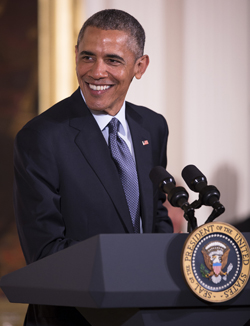 “With humility and with awe, we give thanks to the extraordinary sacrifice of Jesus Christ, our savior,” Obama said at the annual event in the East Room. “We reflect on the brutal pain that he suffered, the scorn that he absorbed, the sins that he bore, this extraordinary gift of salvation that he gave to us. And we try, as best we can, to comprehend the darkness that he endured so that we might receive God’s light.”

Speaking to an audience of Christian religious leaders from around the country, Obama added that “even as we grapple with the sheer enormity of Jesus’ sacrifice, on Easter we can’t lose sight of the fact that the story didn’t end on Friday. The story keeps on going. On Sunday comes the glorious Resurrection of our savior.”

Noting that Pope Francis would be visiting Washington later this year, Obama went on to quote him, encouraging people to seek peace, serve the marginalized and be good stewards of God’s creation. 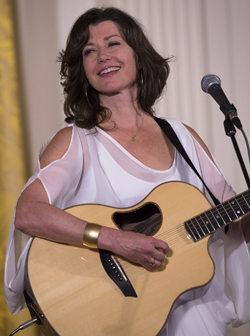 Obama observed that this was how Jesus lived and loved. “Embracing those who were different; serving the marginalized; humbling himself to the last,” and that “this is the example that we are called to follow — to love him with all our hearts and mind and soul, and to love our neighbors — all of our neighbors — as ourselves.”

Gospel and pop singer Amy Grant performed her classic hit “Thy Word,” based upon phrases from Psalm 119, and the Howard Gospel Choir of Washington’s Howard University also sang.

Among the Catholic participants spotted in the room were Cardinal Donald W. Wuerl of Washington; Sister Carol Keehan, a Daughter of Charity who is president and CEO of the Catholic Health Association; Msgr. Ronny Jenkins, general secretary of the U.S. Conference of Catholic Bishops; Jesuit Father Tom Reese, a columnist for the National Catholic Reporter; and White House staffers that included Chief of Staff Denis McDonough.

Scripture readings and prayers were offered by an ecumenical assortment: Dominican Sister Donna Markham, incoming president of Catholic Charities USA, read one passage, while Coptic Orthodox Father Anthony Messeh of St. Timothy and St. Athanasius Church in Arlington, Virginia, read another. Formal prayers were offered by the Rev. Amy K. Butler of the Riverside Church in New York, and the Rev. Justin B. Fung of the District Church in Washington, while the Rev. Ann Lightner-Fuller of Mount Calvary African Methodist Episcopal Church in Towson, Maryland, provided a closing reflection. 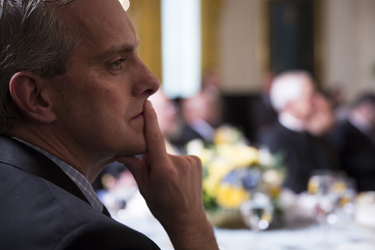 In comments that started with jokes about his backyard being overrun the day before with thousands of participants in the Easter Egg Roll, and about getting teary-eyed as he contemplates his daughters growing up, Obama began to, as he put it, veer off track from the tone of joy and humility of the event. He said that he reflects on the Christian obligation to love, but that “sometimes when I listen to less than loving expressions by Christians, I get concerned. But that’s a topic for another day.”

“Where there is injustice we defend the oppressed,” he said, “where there is disagreement, we treat each other with compassion and respect. Where there are differences, we find strength in our common humanity, knowing that we are all children of God.”

In introducing Obama, Vice President Joe Biden also referenced Pope Francis’ words, quoting from the pontiff’s homily at the Easter vigil, saying “we cannot live Easter without entering into mystery. To enter into mystery means the ability to wonder, to contemplate, the ability to listen to the silence and hear the tiny whisper amid the great silence by which God speaks to us.”

Biden, a Catholic, added that he thinks that’s “who we are as Christians, and quite frankly, I think that’s who we are as Americans. We’re constantly renewed as a people and as individuals by our ability to enter into the mystery. We live our faith when we instill in our children the ability to wonder, to contemplate, and to listen to that tiny whisper amid the great silence. We live our faith when we nurture the hope and possibilities that have always defined us as a country. We live Easter — and to live Easter is to live with the constant notion that we can always do better. We can always do better.”