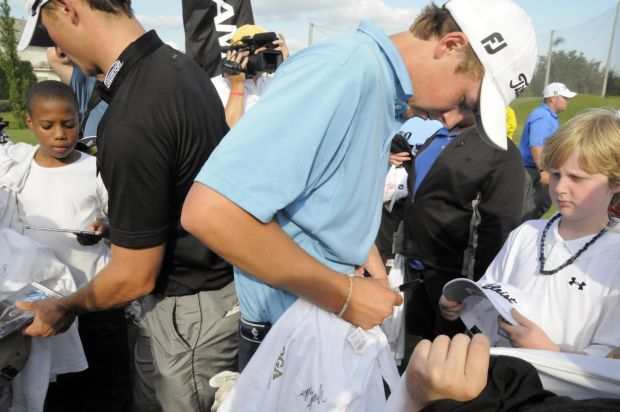 Jordan Spieth autographs memorabilia for young fans after a free golf clinic for youth at the TPC Four Seasons Resort in Irving, Texas, May 18. Spieth, an amateur golfer, was appearing in his first PGA tournament. (CNS photo/Jenna Teter, Texas Catholic) 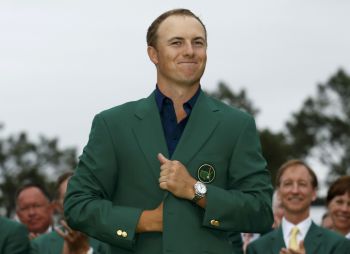 DALLAS (CNS) — Even after becoming the toast of the sports world, golfer Jordan Spieth, a 21-year-old Dallas Jesuit graduate, remained humble and down-to-earth as he worked the crowds at Augusta, handled the media, and bantered with morning and late night talk show hosts after his historic win.

That’s no surprise to those who know the new Masters champion, who set course records at Augusta, Georgia, from April 9-12 on his way to the coveted prize and the iconic green blazer. They say he has kept family first, especially his younger sister, Ellie, who is autistic.

“He is just very genuine,” said Steve Koch, athletic director at Jesuit College Preparatory School in Dallas, which claims Spieth as a graduate of its class of 2011. “He says what he believes. He believes in supporting others, taking care of others before he takes care of himself.”

Michael Earsing, the president of the Jesuit school, said that the foundation of family, balance and caring for others has no doubt created a different perspective for Spieth, one that will serve him well after winning the Masters.

At the Masters, Spieth became the second-youngest player to win and was the first to reach 19 under par in the tournament. His 28 birdies in the four rounds at the Masters is a tournament record. He also logged the best scores after 36 and 54 holes. And if that were not enough, he is only the fifth player in tournament history to lead from start to finish. He finished 18-under par, 270.

Spieth is now ranked as the second-best golfer in the world behind Rory McIlroy, and is watching his already rising status accelerate significantly.

Spieth’s win at the Masters has inspired the Dallas Jesuit community, but perhaps none more so than the school’s golf team, which was preparing for a regional tournament during the Masters tournament. 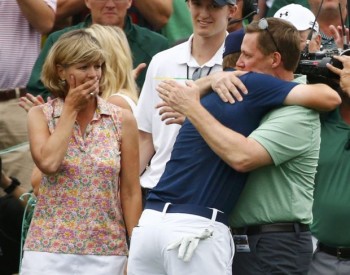 Jesuit golfer Cameron Suhy said the team members were constantly checking their phones to get the latest on Spieth, who only four years ago was in their shoes playing golf for Jesuit.

“It was pretty nerve-wracking the whole week just watching him having to sit on the lead but when he finally pulled it out, it definitely gave our team a lot of confidence,” Suhy said. “We saw that a kid from Jesuit could win on golf’s biggest stage.”

During his time at Jesuit, Spieth led the team to three Class 5A state titles in the University Interscholastic League.

Jesuit golf coach Cathy Marino, herself a 10-year veteran of the LPGA, said while Spieth definitely stood out on the golf course, he was just a normal teenager.

“When he was on the team, he was one of the guys,” Marino said. “He was a regular high school kid a lot of the time and I was glad to see that. I think that’s important especially once you turn pro and it becomes a business.”

For Spieth, the Masters win brought him a paycheck of $1.8 million. He already has an endorsement deal with Under Armour and there is talk that other lucrative endorsement deals are in the works.

He was on various morning shows and late night shows April 13 and April 14. Unlike other Masters champions who take the week off following the tournament, Spieth said that he would play the RBC Heritage in Hilton Head, South Carolina, April 16-19 because he wanted to give back to the tournament that was good to him when he turned pro.

That loyalty is not surprising for those who see Spieth on the national stage. They say he is the same young man with the same value system that he had embraced at Dallas Catholic schools, including his elementary school, St. Monica Catholic School.

“Jordan was always respectful to staff and students alike,” said Colette Corbin of the school’s Student Services Department. “He was one of those kids that would just stay and help clean up in the cafeteria if he saw that I was short on students helping. He was considerate of others’ feelings and tried to include other students that might otherwise not be part of a group.”

And Jesuit’s Earsing said Spieth will be an inspiration for students, parents and teachers in Dallas Catholic schools.

“I think it’s a hope of everybody who works in Catholic education that you see somebody who is achieving at such a high level, who is also a wonderful model for our students,” Earsing said. “Jordan is just the common man who achieves greatness through the blessings and talent God has given him to the maximum.”

Gonzales is a staffer writer for The Texas Catholic, newspaper of the Diocese of Dallas. Texas Catholic staff writer Cathy Harasta contributed to this report.

NEXT: Perfect game driven by pitcher’s mantra: ‘Three up, three down’