Perfect game driven by pitcher’s mantra: ‘Three up, three down’ 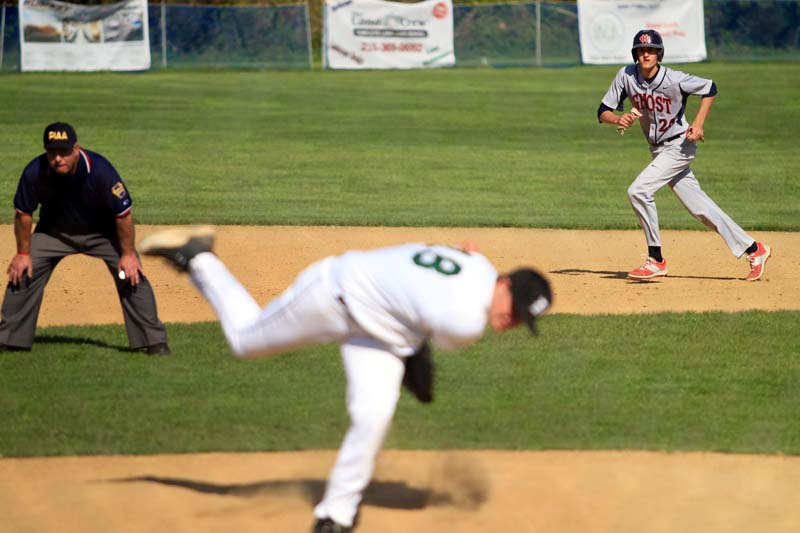 When he's not pitching, Tim Brennan (20) can make things happen on the base paths too, as he advances from first to second during a game April 30. (Sarah Webb) 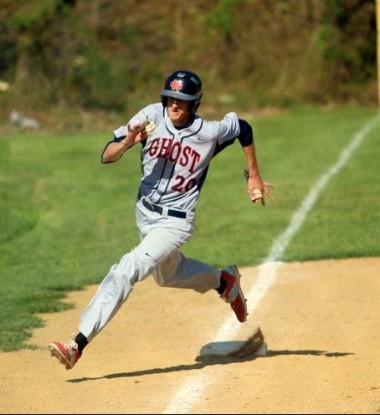 As the outs increased, Holy Ghost Prep senior Tim Brennan simply strolled to his dugout like he has on countless other occasions.

Eventually, that “three up, three down” mantra started to get interesting.

“Maybe around the fourth inning, I realized that no one had gotten on base yet,” Brennan said. “I didn’t think too much about it.”

After three ups and downs in the fifth and sixth innings, mostly everyone at Holy Ghost Preparatory School’s Ted Grabowski baseball field on April 14 recognized that history was just one more “three up and three down” away.

“Everybody was being normal, but (teammates) knew not to talk to me about what was going on,” Brennan recalled. “In baseball, you pretend to ignore it.”

As he entered the seventh inning with the Firebirds ahead of Lower Moreland by a more-than-comfortable 8-0, Brennan willed himself to remain focused. Up until that point, the HGP defense had not been taxed at all, and the only mini-threat of issuing a walk was when Brennan fell behind the first batter with a 3-1 count.

After a quick first out, those rooting for perfection received a major scare when the next batter chopped a ball toward second base and watched it take a tricky hop on senior Ben Decembrino. Unfazed, Decembrino stayed with the play and flipped a throw to senior first baseman Nick Payesko for out number two.

One more to go.

“I just wanted to keep throwing strikes,” said Brennan, a product of St. Jerome School in Northeast Philadelphia. “There was no need to change anything. Keep challenging the hitters.”

Finally, with two strikes, Brennan fired a fastball into the mitt of senior catcher Chris Pawluczyk, and a desperate swing by the Lower Moreland batter met nothing except air.

The game was over. With his 12th strikeout of the contest, Tim Brennan had hurled a perfect game.

“Catching that game was a pretty cool experience,” Pawluczyk said. “I had a feeling from the start that Tim was going to have a good game. In the last inning, we all knew what was happening but tried not to let that affect us. We just treated it like the other innings and made the plays we needed to back Tim up.”

As the Firebirds rushed to the mound to celebrate only the second perfecto in HGP’s rich baseball history – the other was by Carmen Brancato in 1985 – Brennan didn’t immediately internalize the immensity of what he had just accomplished.

“It wasn’t until a few days later that it started to sink in,” Brennan said. “It’s rare to be a part of something like that, let alone be the pitcher. So many things have to go right, and baseball is such a funny game that usually, even if your team is much better than your opponent, something happens for them to reach base with a walk or a hit or an error.”

Brennan, who was also the starting point guard for HGP’s basketball team the past two years, lauded Decembrino for saving his perfect game. Incredibly, Decembrino had not been aware that Brennan had not allowed a single hitter to reach base.

“It was weird,” Decembrino said. “When the ball hit the lip (of the infield), I just tried to knock it down and be in position to make a throw. After the play, there was a lot of cheering for a play that isn’t usually a big deal when you have a lead like that. I looked over and saw the guys standing by the fence like something big was about to happen, and then it dawned on me that no one had even reached first base at that point.

“Tim was so dominant. It was like we were on autopilot and just kept watching him strike everyone out. If I had known he was working on a perfect game, there would have been a lot more pressure to make that play.”

Brennan only needed 77 pitches to record 21 outs, and of those, 56 were strikes. Despite the fanfare, Brennan said his most memorable pitching performance was two years ago in the District 1 championship against then-powerful Upper Moreland, when he fired a two-hit shutout.

A varsity player since his freshman season, Brennan’s high school resume is staggering. Along with a 15-3 record and 12 saves, his career earned-run average is less than one run per game. A second baseman when he isn’t on the hill, Brennan is a three-time all-Bicentennial Athletic League selection; last year, he was named the BAL’s Most Valuable Player.  This spring, his batting average is a jaw-dropping .615.

Brennan’s efforts have garnered him a baseball scholarship at St. Joseph’s University, where he will major in sports marketing and minor in finance.

“I’m at a loss for words to end up at a place like St. Joe’s,” Brennan said. “To think back when I was playing ball when I was young, I just played because I loved it. When I got to high school I still loved it, but I started pursuing my future more. Between what is happening now and what awaits me in the future, I couldn’t be more thankful.”

NEXT: Schoendienst quietly lives his faith, serves as mentor to young players