Catholic teaching on the family: A mission of love 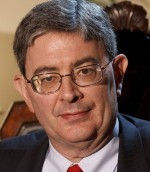 The World Meeting of Families in Philadelphia this September should be more than a vast Catholic “gathering of the clans” around Pope Francis — and so should the months between now and then. If the Church in the United States takes this opportunity seriously, these months of preparation will be a time when Catholics ponder the full, rich meaning of marriage and the family: human goods whose glory is brought into clearest focus by the Gospel. Parents, teachers and pastors all share the responsibility for seizing this opportunity, which comes at a moment when marriage and the family are crumbling in our culture and society.

Now, thanks to a fine mini-catechism prepared by the Archdiocese of Philadelphia and the Pontifical Council for the Family, we’ve been given a basic resource with which to do months of preparatory catechesis on marriage and the family — and preachers have been offered reliable material for shaping homilies on these great themes between now and September.

“Love Is Our Mission: The Family Fully Alive” (Our Sunday Visitor) begins by reminding us that the Catholic Church’s teaching on marriage and the family is not composed of “positions” or “policies,” a widespread misunderstanding today. Rather, the Church’s teaching about marriage and the family are expressions of the basic truths of Christian faith: God, who brought the world into being, loves us; the divine love is most powerfully displayed in God’s son, Jesus Christ; friendship with Jesus brings us into the communion of the Church, which is a foretaste of the communion with God for which we are destined; our basic task as Christians is to offer others the gift we have been given — friendship with the Lord, which we do both by witness and by proposal. Or as St. Augustine so memorably put it in the “Confessions,” we have been made for God, and our hearts are restless until they rest in the divine embrace.

Nothing falls outside God’s creative and redeeming purposes, which include our being created male and female, the complementarity and fruitfulness built into our being created male and female, and the permanence of marriage, which is a sign of God’s own covenant fidelity. God is a communion of loving Persons; thus married love, St. John Paul II taught, is an icon of the interior life of the Holy Trinity. God keeps his promises; thus the promise-keepers among us who live the covenant of marriage bear witness to that divine promise-keeping by their own fidelity.

In light of all this, the Christian idea of chastity comes into clearer focus. In the Catholic view of things, chastity is not a dreary string of prohibitions but a matter of loving-with-integrity: loving rather than “using;” loving another for himself or herself. The sexual temptations to which the Church says “no” are the implications of a higher, nobler, more compelling “yes:” yes to the integrity of love, yes to love understood as the gift of oneself to another, yes to the family as the fruit of love, and yes to the family as the school where we first learn to love.

“Yes” is the basic Catholic stance toward sexuality, marriage and the family. We should witness to that “yes” with a joyful heart, recognizing that the example of joyful Catholic families is the best gift we can offer a world marked today by the glorification of self-absorption.

In a pontificate that has reminded us continuously of our responsibilities to the poor, for whom God has a special care, preparations for the World Meeting of Families are also an opportunity to remind our society that stable marriages and families are the most effective anti-poverty program in the world. As demographer Nicholas Eberstadt wrote recently, “the flight from the family most assuredly comes at the expense of the vulnerable young” — especially low-income children, who are more vulnerable to the toxic effects of family breakdown. That’s not Catholic carping; that’s basic social science data.

The Catholic idea of marriage and the family is a gift for the whole world. Catholics should give that gift away, profligately, in the months ahead.

George Weigel is a senior fellow of the Ethics and Public Policy Center in Washington, D.C.