Bishop in Nepal: Time is running out for victims of earthquake 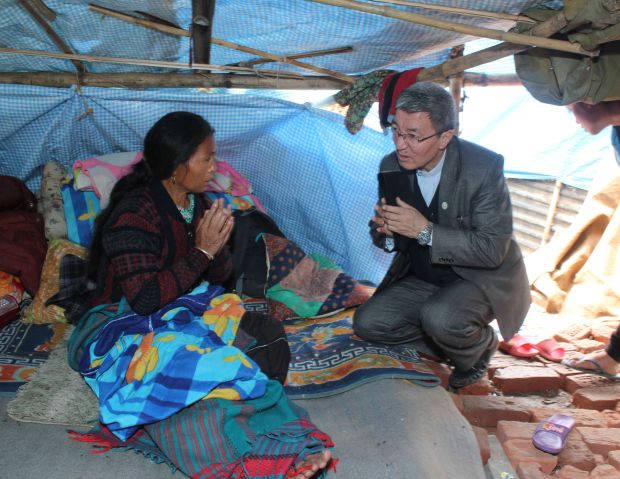 KATHMANDU, Nepal (CNS) — Time is running out for victims of Nepal’s earthquake, who are suffering because aid cannot reach them, said Bishop Paul Simick of Nepal.

“The biggest challenge now is the time factor. All of us have to rush to reach out to the victims. It’s already too late,” Bishop Simick told Catholic News Service April 30 after a five-hour trip to some of the worst-affected areas of Nepal’s capital.

“If this is the state of affairs in the capital, you can imagine the suffering of the people in the remote areas,” Bishop Simick said at the end of the visit to St. Ignatius Parish in Banyatar.

During the two-hour drive from the bishop’s house to the parish, Bishop Simick got out at several places touched by the devastation.

At St. Ignatius, which he reached on a slushy footpath, Bishop Simick visited with local residents. He prayed with members of 15 Catholic families who have taken shelter in the church, including some injured and wearing arm slings. A dozen Hindu families also have sought shelter there.

The parish priest, Father Anil Beck, told the bishop that 9-year old Michele Ghale had died when her house collapsed.

“We have no trace of five (Catholic) families. The road to their village is blocked. I am trying to reach them,” said Father Beck.

The parish cook, Sharki Ghale, introduced his wife, Temaya and daughter Dilasha — both of them bruised from the collapse of their house overlooking the church.

The bishop also met Sujina Ghale, 4, who almost was cremated when she was mistaken for dead. Sujina, with her bruised face, lay quietly as her mother, Chaju Ghale, recounted her daughter’s escape.

Chaju Ghale was tending grazing cattle April 25 and had to walk four hours after she felt the tremors.

“When I reached (home), they were taking her (Sujina) also for cremation (along with six other dead bodies). I pleaded with Phullu Tamang (the village health worker) to check on my daughter, and he found her body was warm,” recounted the mother.

The child had been pulled out from the debris of her house two hours after the quake and kept with other dead bodies till the evening.

Sujina was rushed to the village health center and government officials were informed. Early April 26, she was airlifted by helicopter along with the mother to Kathmandu.

Bishop Simick said he was especially “worried about the situation in the villages.

“Affected people will die a slow death unless relief work is stepped up and well-coordinated,” he said.

“You see people queuing up for water even here. Unless they have drinking water, medicines and shelter, epidemics will break out, and it will a big tragedy. I am worried about the suffering of the people in the villages,” the bishop said as his vehicle passed collapsed buildings.

“But sadly, things are happening the wrong way,” he said. “We wanted to go to a remote area with relief material. But a local government official informed our people that we could leave the material with them and they will distribute them. This is not what we want.”

“I am glad that lot of Catholic charity groups from Caritas network, CRS are here to help us,” the bishop said, referring to Catholic Relief Services, the U.S. bishops’ relief and development agency. “This is a moment of test for the church in Nepal to coordinate the relief and make use of the relief and disaster management expertise of the entire Catholic Church for the people of Nepal.”

“I was coming down a steep hill with my driver after the ordination when I heard a sound like that of a helicopter. The earth was trembling. Houses were falling like a pack of cards and stones were rolling down,” the bishop said.

Later, they drove for several hours and had to stop at Maithili, where the road had been blocked due to landslides.

“We walked for hours and reached a church center. Next day they arranged me a vehicle and finally, I reached Kathmandu by Tuesday (April 28),” Bishop Simick said.

NEXT: Archbishop seeks help for embattled Christians of Syria