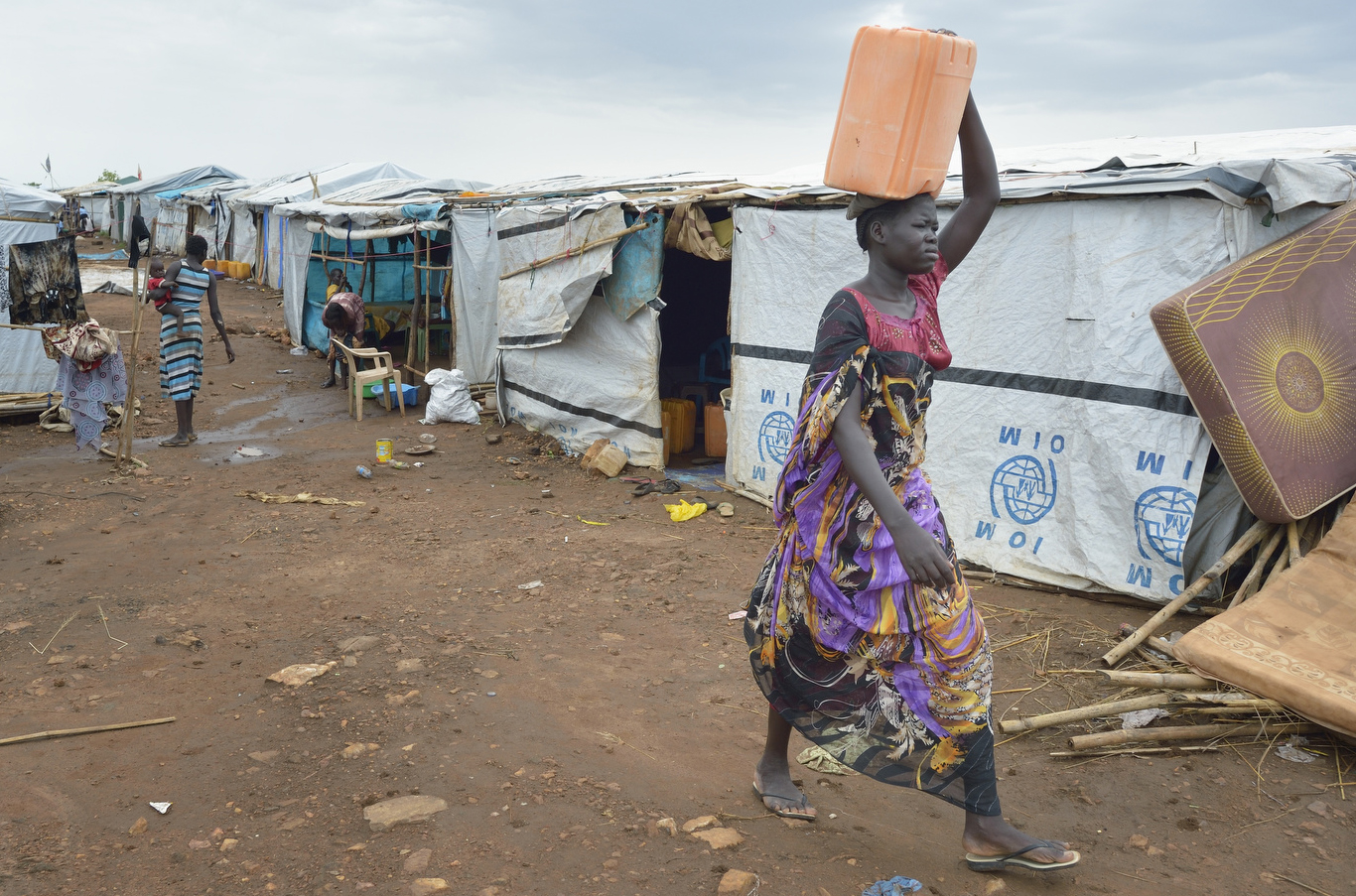 A woman carries a container of water on her head inside a United Nations base in Juba, South Sudan, March 7. Church leaders in South Sudan are trying to breathe new life into their country's stalled peace talks. (CNS photo/Paul Jeffrey) 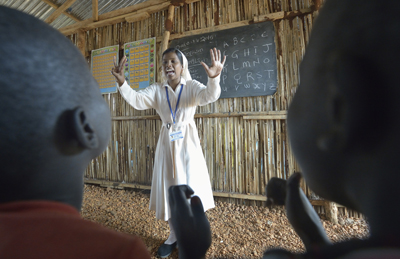 Sister Mariya Soosai, a member of the Daughters of Mary Immaculate, leads a group of children March 7 in an arithmetic class in a camp for internally displaced families inside a U.N. base in Juba, South Sudan. Some 34,000 people have sought protection at the base since violence broke out in December 2013. (CNS photo/Paul Jeffrey)

Stating that they spoke “with divine authority,” leaders of the South Sudan Council of Churches, which includes Catholics and Protestants, issued a statement in late March lamenting that many leaders in the country’s civil war “genuinely can’t see how to make peace; they can’t see a way out of the pit they have fallen into.”

Catholic Archbishop Paulino Lukudu Loro of Juba was one of the signers of the March statement, which noted that advances in the peace process “are difficult when there is a complete lack of trust between the parties, and when each is promoting its own interests. The church is trusted by the people of South Sudan and has no interests except those of the people, for peace and justice. We ourselves will create a forum to help the parties to build trust and to discover where compromises can be made.”

Fighting broke out in Juba in December 2013 between ethnic Dinka and Nuer in the presidential guard, months after President Salva Kiir, who is Dinka, fired his vice president, Riek Machar, who is Nuer. The fighting spread quickly to other parts of the country. As many as 10,000 people have been killed and more than 1 million displaced in the months since. Recent weeks have seen renewed fighting in several areas. 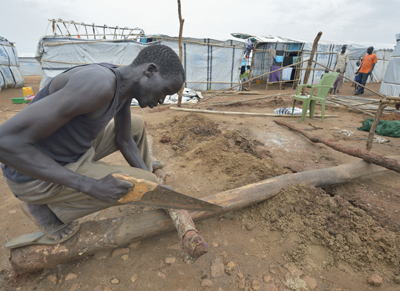 A man constructs a shelter inside a U.N. base in Juba, South Sudan, March 7. (CNS photo/Paul Jeffrey)

John Ashworth, an adviser to both the church council and to the country’s Catholic bishops, said the March statement marks a new protagonism by religious leaders. Council leaders were meeting in early April with international church leaders in Addis Ababa, then were to go on a retreat to plan the details of their peace campaign, which Ashworth said would consist of a series of meetings with politicians, military officials and civil society leaders from both sides.

“We’re going to create a genuinely neutral forum, because these people can’t agree on anything by themselves. There’s no trust between them. But the church is still trusted enough by everyone to play a critical role. We want to create a trusting environment that’s not politically charged,” Ashworth, a former Mill Hill priest, told Catholic News Service.

Ashworth said the discussions will take place outside the country so that members of the armed opposition can participate — but not in Addis Ababa, where official talks take place.

Catholic leaders have participated at the edge of the Addis Ababa talks, but as part of a larger faith-based contingent that includes Christians and Muslims. The religious groups were invited to the talks by the Intergovernmental Authority on Development, a coalition of regional governments known as IGAD.

“We became sort of chaplains to the peace talks. Especially at the beginning, there was a lot of hate, and the two sides couldn’t even talk to each other,” Bishop Edward Hiiboro Kussala of Tombura-Yambio told CNS.

“We didn’t pressure anyone, or they would have begun to mistrust us. Our job was to encourage and animate. If anything, we were a bit soft on them,” he said.

Ashworth said being an official part of the peace talks contributed to the church losing some of its moral authority.

“The church leaders in Addis Ababa got sucked in and became too identified with IGAD, which was paying a lot of their expenses. The IGAD leaders started seeing the church as something at their beck and call, and some church leaders felt they were being used. So they’ve decided to frame their participation on their own terms,” he said.

According to Bishop Hiiboro, who has earned the ire of some government officials for his resistance to army recruitment efforts in his diocese, the church continues to play a critical role in working for peace.

“We blame ourselves that at independence we left the government to run the country, and we focused on our church program, only to find out that these guys weren’t doing the right thing,” Bishop Hiiboro said.

“The church can still talk to people and mobilize the community. We can help the people be more aware of their rights and dignity and their responsibility toward the country. If they don’t find a solution soon, we’re going to have a nationwide conflict. We can help the peace process by helping the participants understand the gravity of the situation.”

Ashworth said the church leaders have no illusions about bringing the war to a rapid end.

“Neither side is ready to make peace. Both are seeking military advantage. Riek Machar wants to be president, but he’d never win an election in the real world, so the only options to him are violence or the manipulation of the peace process,” Ashworth said.

He said Machar does not totally control his opposition movement, which is led in the field by ethnic warlords who have been fighting for some time.

“By aligning themselves with Machar’s opposition movement, they became rebels with a cause,” Ashworth said. “Riek Machar is afraid to sign anything lest they kill him.”

Ashworth said the government’s military is more unified and, in theory, under the president’s command, but it, too, was cobbled together from several ethnic militias, and Kiir has struggled for years to keep disaffected factions from slipping away.

Bishop Hiiboro said the bishops have maintained a close relationship with the president.

“He’s a good man, and we have talked a lot with him. He’s not interested in war. But we are concerned about the circle of people around him. After we talk to him, he goes home and these people come to him and he does exactly what we thought he would not do.”

The international community, including the U.S. government, continues to threaten sanctions against both sides of the conflict. Ashworth thinks some of the treatment of Kiir’s government has been unfair.

“The international community handled this all very badly. They were here in December 2013. They watched the Nuer being killed and then they buggered off, as they do, jumping in their evacuation planes. We didn’t see them for months and months. Meanwhile, the Nuer massacred Dinka and Shilluk on a scale that made the original massacre look like chicken feed. When they finally came back here, issuing mealy-mouthed statements about both sides committing atrocities, they launched a barrage against the government and threatened to withdraw development assistance,” he said.

Ashworth warned against thinking a government headed by Machar would be a democratic model.

“A country with a bad government is better than a country with no government. If this government falls, the country will be riven with killing and slaughtering, and towns will be burned to the ground for years to come,” he said.

NEXT: Adults are responsible for systems that make kids suffer, pope says