In destroyed Israeli village, exiled residents unite at the church 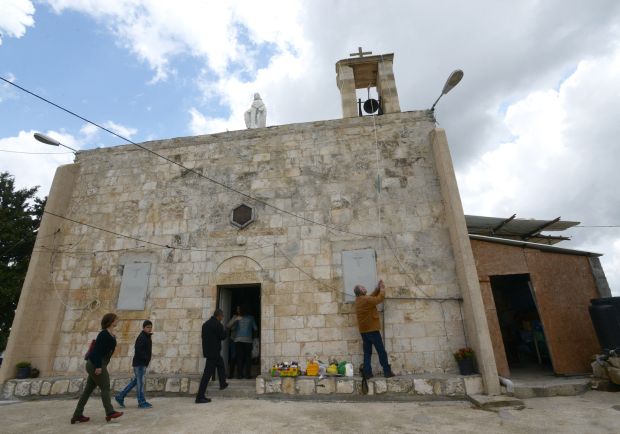 A man rings the church bell before Easter Monday Mass at St. Mary's Church in Iqrit, Israel, April 13. The residents were expelled by the Israeli army in 1948 and have never been able to permanently return to the village. (CNS photo/Debbie Hill)

IQRIT, Israel (CNS) — For the elders of Iqrit, their biggest regret in life is not having been able to raise their children together.

On April 13, they congregated with the younger generations in the old Church of St. Mary for Easter Monday Mass in this destroyed Melkite village perched on a sloping hill in Western Galilee.

As youngsters, they and their families left the village in October 1948, shortly after the Israeli war of independence, at the behest of the fledgling Israeli army, which said they would be allowed to return after 15 days. The villagers had hoisted the white flag atop their church as the soldiers entered, and the village priest received them with a Bible, and salt and bread as signs of peace and rapport.

But as Israel, which uses the Jewish calendar for holidays, is set to celebrate its 67th independence day April 23, the people of Iqrit are still waiting to return to their village.

A July 1951 Supreme Court decision ruled residents could return due to a lack of evacuation orders. Five months after the court’s decision, formal evacuation orders were issued. On Christmas Eve 1951, Iqrit was destroyed except for the church.

Villagers were finally allowed to re-enter their village in the summer of 1971.

The tightly knit group of some 126 families eventually dispersed among nearby villages, but they have never lost their connection to their town or given up their struggle to return. They continue to celebrate a monthly Mass at the church together, to teach their children, grandchildren, and now the newest great-grandchildren to love their Iqrit roots through gatherings and summer camps. They have come to bury their dead at the cemetery here, and now the elders say that they, too, will be buried here. At least then, they say, they will be allowed to return to Iqrit. 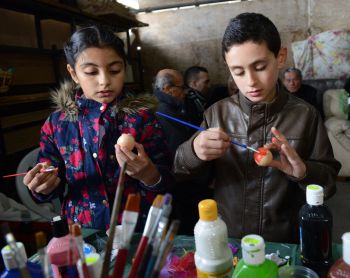 “Even our children don’t know each other. It is sad,” said Abdullah Haddad, 85, as he recounts the story of his secret courtship with his wife, Vidad, 83. Their relationship was disrupted because of what followed after the evacuation, and Abdullah Haddad went to work in Jerusalem. But Vidad Haddad said she put off other marriage proposals and waited 10 years until she and Abdullah could marry.

Haddad said he has not yet lost hope of returning — if not him, then his grandchildren.

Sitting together in a tin shack used as a reception hall with his brother Ibrahim and some childhood friends, Ayoub Ayoub, 76, recalled Easters in the village, when the girls would prepare colored eggs and the boys would sneak around to steal a look at the girls they fancied. 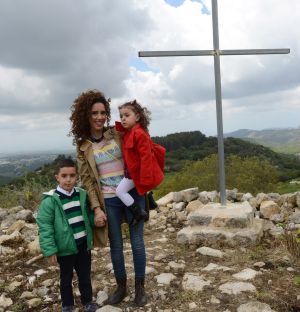 Nijmy Yacoub, 26, stands with her niece and nephew in front of a cross after Easter Monday Mass at St. Mary’s Church in Iqrit, Israel, April 13. (CNS photo/Debbie Hill)

“These are memories we don’t forget,” he said. “When we are here, we are like one family. It is a happy and sad occasion to come here. The only thing I ask is that when God takes me, he allows my soul to return here and not to Rameh as a refugee.”

Though several Israel politicians — and even nearby Jewish communities — have expressed support for their cause, officially Israel has not relented.

Aymen Odeh, a Muslim, attended the Easter Monday Mass. The newly elected Knesset member is leader of the Joint Arab List, now Israel’s third-largest political party. He is a longtime supporter of the villagers and said he respects their nonviolent methods, but added that it was time to take the case outside the village.

“We need demonstrations in public squares and in front of the Knesset,” he said. “Things here are far away from the public eye.”

He said the Israeli position that the villagers could not return because of security reasons due to its strategic hilltop location is no longer valid, because the villagers and their descendants have proven to be loyal, productive citizens of Israel — some even serve in the army. He said the fear that their return would create precedence for demands by others is also null since the cases of Iqrit — and the Maronite Catholic village of Biram, whose residents faced a similar situation — are unique in that they left with the promise of return and have a Supreme Court decision in their favor. 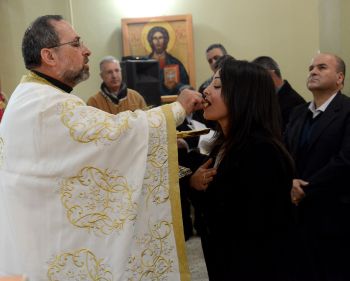 For several years, some members of the younger generation, such as Nijmy Yacoub, 26, who grew up in Kfar Yasif, and Samer Awess, 21, of Haifa, have established a presence on the site, rehabilitating the rectory and planting gardens near the church. When they can, they spend the night in the village.

“We love the land and we feel a strong connection to this place,” said Awess, noting that theirs has always been a peaceful struggle. There is no reason to resort to violence, he said. “That is the nature of the village. We are doing the right thing. We feel like we have something here which belongs to us. I believe that someday we will be allowed to return. There is no reason not to. We are not settlers here; this is ours.”

“I feel more connected here than to the village where I grew up,” added Yacoub, who had her young niece and nephew — already the fifth generation of Iqrit descendants — in tow. “When I come here I feel comfortable, and I come here when I am feeling low. I like to tell the stories my grandparents told my father, and my father told me.”

After the Mass, Melkite Father Souhail Khoury, whose great-great-great-grandfather was a priest in the village and is buried in the church, was asked by several eager grandparents to “church” the newest-born, in the Melkite tradition.

“Even if we live in Haifa or other places where we have no problems, our connection is here to the church and the priest here. This is our holy site,” said Hubbeya Khoury, 60, as she held her infant grandson, Ettienne, after the rite.

“We believe in prayer,” said the priest, who lives in Nazareth, where he also serves as a parish priest and in a nearby village. “We ask God to be with us and hear us and answer us so we can come back to live in Iqrit.”

NEXT: Pope warns religious against ‘crisis of quality’ in consecrated life