Nigerian cardinal: God will answer prayers for rescue of schoolgirls 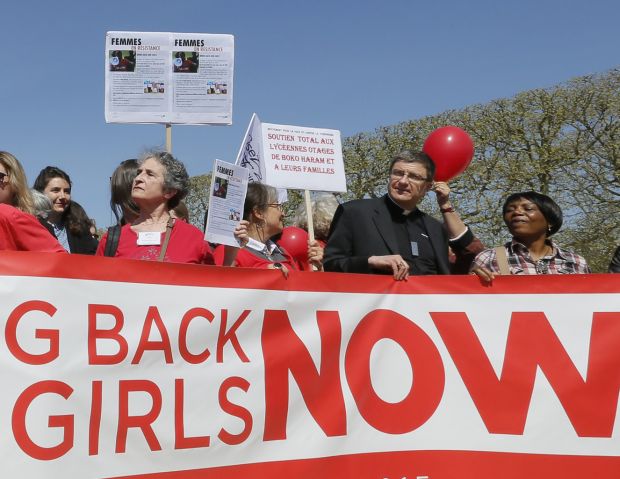 A clergyman joins others in a "Bring Back Our Girls" gathering in Paris April 14. A year after more than 200 Nigerian schoolgirls were kidnapped, Lagos Cardinal Anthony Olubunmi Okogie said he believed that "God will answer our prayers" for their return. (CNS photo/Gonzalo Fuentes, Reuters)

LAGOS, Nigeria (CNS) — A year after more than 200 Nigerian schoolgirls were kidnapped, Lagos Cardinal Anthony Olubunmi Okogie said he believed that “God will answer our prayers” for their return.

In an interview with Catholic News Service April 14, the cardinal also said President-elect Muhammadu Buhari must make the rescue of the girls a top priority when he takes office.

Cardinal Okogie, retired archbishop of Lagos, said it was a pity that the Borno government could “not hit the iron on the head when it was still hot.”

“If I were in charge at the federal level, I would have dealt with the state government and the governor for being weak. How can several lorries convey those girls away, and no security personnel saw them throughout the period the operation lasted?” he asked.

The cardinal said incoming governments at the federal and state levels must do all within their powers to rescue the schoolgirls: “All hands must be on deck to rescue them.”

He noted that once rescued, the girls would need help with rehabilitation from the trauma.

“I hope and pray that they are still alive and one day they will be rescued by the security agencies and be reunited with their parents,” he said.

Archbishop Ndagoso wondered the state of mental and psychological trauma experienced by the girls and their parents.

“I think about their parents every time, and I cannot image myself being in their positions,” he said.

“Chibok is an area I knew very well when I was the bishop of Maiduguri, and some of the families whose daughters are among those abducted by the Boko Haram insurgents must have been my parishioners then,” he told CNS.

He, too, said Buhari should make the rescue of the girls and the fight against terrorism one of his main responsibilities should the current administration fail to find the girls before leaving office in late May.

Father Christian Anyanwu, director of communications for the Catholic Secretariat of Nigeria, said the current administration’s handling of the situation was unsatisfactory, and the government “seems not to be in control of the situation.”

“In the last one year now, no one, including our security operatives, seems to know where the girls are. The information that continues to filter in is often contradictory,” he said.

“At the beginning, we heard that U.S. and U.K. governments tried to send their troops to assist in locating and freeing the girls. They quietly left and nothing has been said about their withdrawal. The way and manner of their withdrawal raise some questions,” he said.

PREVIOUS: War of the sexes: Gender theory is the problem, not solution, pope says