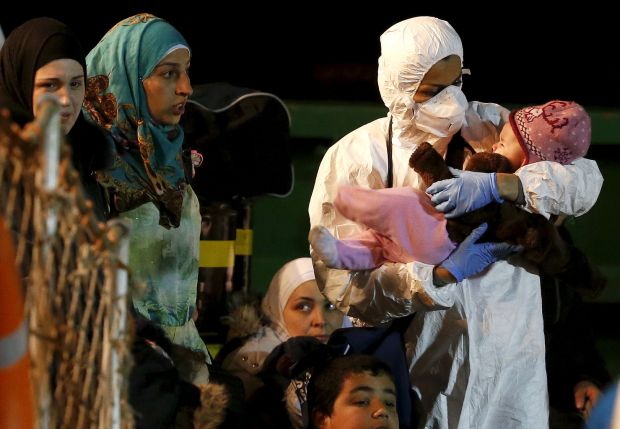 A child is carried by a rescue worker as migrants arrive on a boat at the Sicilian harbor of Pozzallo April 19. Reciting the Regina Coeli prayer April 19, just hours after reports surfaced that perhaps more than 700 migrants drowned in the Mediterranean while trying to reach Europe, (CNS photo/Alessandro Bianchi, Reuters)

VATICAN CITY (CNS) — The poor, migrants in search of a better life and the unemployed want what all human beings want: life, dignity and a chance to earn a decent living, Pope Francis said in several speeches urging compassion and assistance by both governments and individuals.

Reciting the “Regina Coeli” prayer April 19, just hours after reports surfaced that perhaps more than 700 migrants drowned in the Mediterranean while trying to reach Europe, Pope Francis asked the thousands of people in St. Peter’s Square for a moment of silence and then to join him reciting a Hail Mary for the victims and survivors.

The Italian coast guard reported that as of late April 19, 28 survivors had been rescued and 24 bodies had been recovered; one of the survivors, a Bangladeshi, told authorities the smugglers had locked hundreds of people in the hold, so there may have been as many as 950 people on board.

Pope Francis called on the international community to act decisively and quickly to prevent the deaths of more migrants. “They are men and women like us, our brothers and sisters who seek a better life; hungry, persecuted, injured, exploited, victims of war — they seek a better life. They were seeking happiness.”

Pope Francis had spoken April 18 with Italian President Sergio Mattarella about the continuing wave of migrants who set off from North Africa, often in overcrowded and unsafe fishing boats, hoping to land in Italy and make their way to other European countries. For years the Italian government has been asking the European Union for concrete assistance in regulating migration, patrolling the waters and rescuing those at risk of drowning. 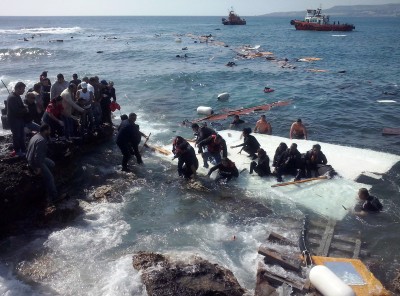 Migrants arrive at Zefyros beach near the coast of the southeastern island of Rhodes, Greece, April 20. At least three people drowned the day after Pope Francis appealed for the international community to do more to prevent such migrant deaths. (CNS photo/Loukas Mastis, EPA)

The pope thanked Italy for assisting “the numerous migrants who, at the risk of their lives, ask to be welcomed. It is obvious the size of the phenomenon requires a much broader involvement,” the pope said. “We must never tire of requesting a commitment that extends to a European and international level.”

As Mattarella made his first state visit to the Vatican, Pope Francis also urged greater Italian government efforts to create jobs, especially for the young. Among all the ingredients needed for economic growth and development, the pope said, work is one of the most important because it is tied to the dignity of the person and his or her ability to build a life.

“The lack of jobs for young people,” he said, is “a cry of pain” that must be heard by governments, private businesses and the church community, which should rally together to give job creation priority. “Access to dignity and a future relies on access to a job,” the pope said.

Pope Francis also spoke April 18 with members of the Pontifical Academy of Social Sciences, which dedicated its plenary assembly to examining the phenomenon of human trafficking, including the trafficking of migrants.

The Bible insists that Christians will be judged by how they cared for “the least” of their brothers and sisters, he said. “And today among these most needy brothers and sisters are those who suffer the tragedy of modern forms of slavery, forced labor, prostitution” as well as the victims of trafficking in organs and in drugs.

Slavery, which “was widespread and socially accepted — scandalously including in the Christian world because it was big business” — eventually was abolished through long-term and dedicated efforts by both Christians and people of no religious faith who worked together to fight for human dignity, he said.

“Unfortunately, in a global economic system dominated by profit, new forms of slavery have developed and in some ways they are worse and more inhumane than that of the past,” the pope said. “We are called to denounce and combat them.”

Every citizen of every country must be made aware of human trafficking and join the fight against it, he said.

Special action is needed to encourage countries to enact legislation to bring traffickers to justice and to use “their unjust earnings for the rehabilitation of victims,” he said. Nations also must be encouraged to grant asylum to the migrants who have fallen prey to traffickers and ended up in their nations.

Also April 18, Pope Francis met with representatives of the International Catholic Society for Girls, an organization offering shelter and education, training, psychological and spiritual assistance to migrants and other girls and young women at risk.

While he praised the organization’s members for living out the Gospel call to service, he also asked them to “learn from these young women you stand alongside and help. Despite their difficulties, they often are witnesses of the essential virtues of brotherhood and solidarity.”

In addition, the pope said, “they remind us that we are fragile and depend on God and on others.”

Pope Francis prayed, “May the merciful gaze of the Father touch us and help us accept our own poverty in order to move forward with trust and commit ourselves together to that ‘revolution of tenderness’ that Jesus began with his incarnation.”