New priests tell the tales of how God called, and they answered 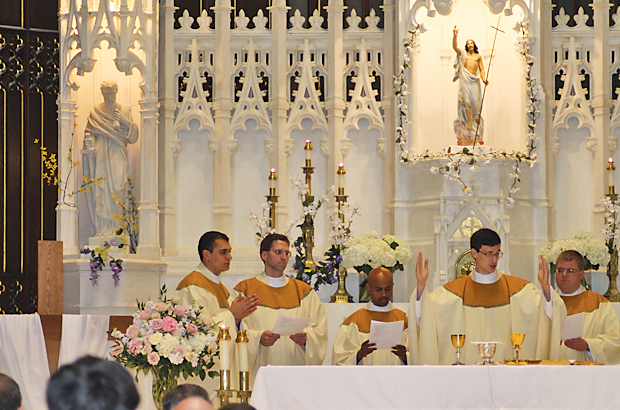 The newest priests ordained for the Archdiocese of Philadelphia celebrated Mass together Monday, May 18 at St. John the Evangelist church in Philadelphia, followed by a luncheon sponsored by the Serra Clubs of the region. (Photo by Lou Baldwin) 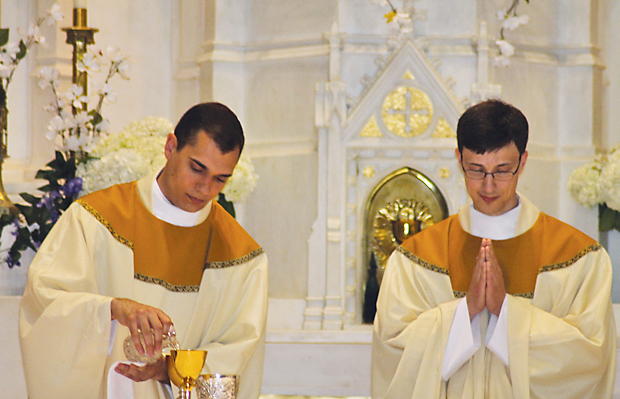 Father Daniel Arechabala assists at the altar for his classmate, Father Alexander Gibbs, who was main celebrant for the Mass. (Lou Baldwin)

It’s a long-standing tradition. Every year, on a Saturday in May, the Archbishop of Philadelphia ordains seminary graduates to the priesthood.

On Sunday they celebrate their first Mass at their home parish and on Monday they assemble as a group and concelebrate a Mass sponsored by the Serra Clubs in the Philadelphia area at St. John the Evangelist Church in Center City, followed by a luncheon.

This year was no different.

This year’s concelebrated Mass with Msgr. Richard Bolger as the homilist was followed by the luncheon at the nearby Loew’s Hotel for approximately 200 guests. They included Serrans, family of the newly ordained, priest friends and most important, about 100 students from area Catholic high schools, both boys and girls, as a way to encourage future religious vocations.

Each of the seven newly ordained related for the audience a brief history of his vocation journey.

For Father Daniel Arechabala, that goes way back. He was just a 5-year-old child attending a family Mass at St. Charles Borromeo Seminary. He was fascinated and asked if he could serve.

“I hadn’t received my first holy Communion yet, but the priest let me serve anyway,” he said. “That left a deep impression on me and I trace my journey back to that time to now at the altar as a priest.”

Father James Cardosi did not enter the seminary at a young age. After Bishop Kenrick High School he accepted an appointment to the U.S. Naval Academy, followed by a career as a naval officer. He also married Cindy, his sweetheart from Academy days, and together they raised five children as he rose to the rank of captain.

He retired when Cindy became gravely ill and he became her caregiver. Her death in 2008 was not easy for him, but through this he discerned his future vocation.

“I was filled with gratitude to God for giving me the grace to get through that difficult time,” he said. “Your relationship with Jesus Christ is the most important thing in your life.”

Father Alexander Gibbs was technically a Catholic growing up, but “I was a heathen until about age 18 when I went to college and became another kind of heathen,” he said. “At college (Temple University)

I had an awakening to the faith and started to really pursue a Christian life.”

He also began to seriously consider the priesthood, and after his graduation with a degree in geology he entered St. Charles. “Now I am moving on to a different kind of Rock, which is the Church,” Father Gibbs said.

Father Steven Kiernan traced his vocation story back to when he was in the eighth grade in Scranton.

The bishop visited his parish for a special Mass, and as bishops often do, afterwards he asked the people to pray for more vocations.

‘“You would make a good priest,’ he said, pointing directly at me,” Father Kiernan recalls. “That was 25 years ago. I guess he was right.”

Father Addisalem Mekonnen was in seventh grade when a seminarian visited his school to give a vocations pep talk. “I remember I asked him if he had a girlfriend,” Father Mekonnen said.

Any relationship with the Lord he developed was entirely due to his mother who took him to church faithfully. “She was always praying for me,” he said.

Father Kevin Mulligan, another late vocation, remembers his teen years as filled with sports, concerts and girls. As an adult he was a long-time sportswriter for the Philadelphia Daily News. Then he became more serious about his faith in the archdiocesan Communications Office as an associate director.

It was through perpetual adoration of the Blessed Sacrament at his parish, Visitation B.V.M. in Norristown, that he discerned with encouragement from his friend Bishop Robert Maginnis that he should follow his inner voice and enter seminary formation.

Father Joseph Zaleski first entered St. Charles Seminary in 1995, but left in 1999. After working for a time at Philadelphia City Hall, he switched to teaching at SS. John Neumann and Maria Goretti “for seven wonderful years,” he said.

There he rediscovered his dormant vocation and re-entered the seminary. “Now as a priest I have never been happier in my life,” he said.

Whether they entered at 18 or 50 it’s all a matter of answering the call.  Using a sports analogy from his past, Father Mulligan said, “If God throws you the ball, don’t be bashful. Catch it and throw it back.”

All of this delights the members of Serra.

“We are happy with all of the vocations,” said Joanne Bellendorf, who was representing the Serra Club of Northeast Philadelphia. “We pray for vocations every day of our life and we hope this coming year there will be even more.”

The next big event, according to Royal Brown, president of the Philadelphia Serrans, will be a dinner at St. Charles Seminary on Oct. 25, which will raise funds to assist the Vocation Office’s outreach to young people.