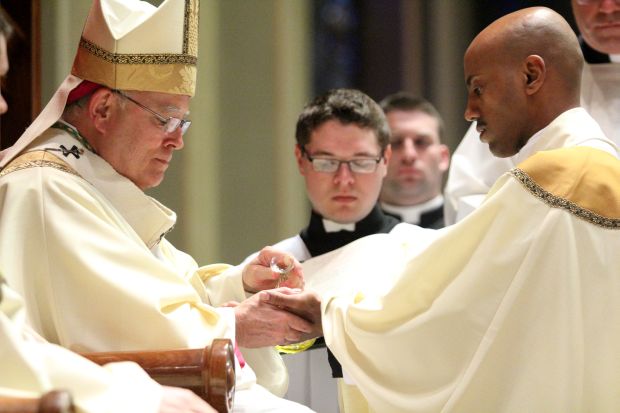 Archbishop Charles Chaput anoints the hands of Father Addisalem Mekonnen with holy oil during the ordination rite in May 2015. (Photo by Sarah Webb) 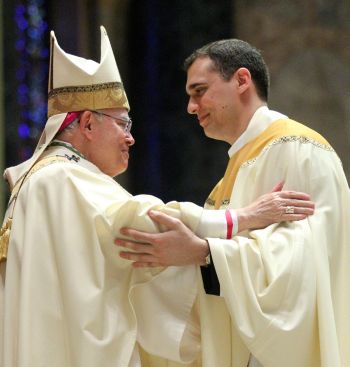 It was a joy-filled Mass for the Archdiocese of Philadelphia. Archbishop Charles J. Chaput ordained seven men to the priesthood at the Cathedral Basilica of SS. Peter and Paul on Saturday, May 16. (See a photo gallery.)

The first two readings from Scripture at the impressive liturgy centered on the role of the priest. The Gospel, taken from the Gospel of St. John, echoed the words of Jesus Christ, the High Priest: “…I am the Good Shepherd, and I know mine and mine know me, just as the Father knows me and I know the Father; and I will lay down my life for the sheep.”

Basing his homily on Christ the Good Shepherd, Archbishop Charles Chaput said, “Like the shepherd, Jesus leads us, feeds us and protects us.”

Priests, he told the men about to be ordained, “are chosen to carry out the ministry of the one Good Shepherd in the life of our Christian community. In other words you will be called to lead, to go before God’s people, to feed them with his word…. You will unite your lives and your wills to Jesus, so that your actions become one with his actions.”

After the ordination Mass Archbishop Chaput thanked the parents for giving their sons to the church and issued a plea for the promotion of vocations to the priesthood, noting that every year more priests retire than are ordained. 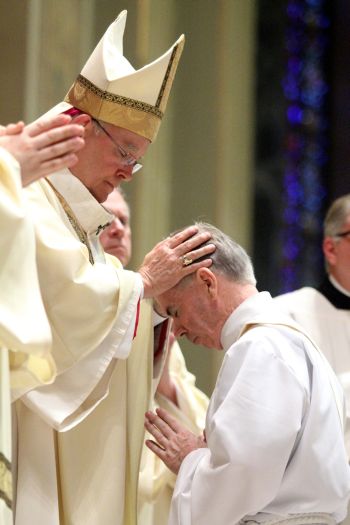 Archbishop Chaput lays hands on Father Kevin Mulligan, ordaining him a priest for the Archdiocese of Philadelphia. (Sarah Webb)

Two, Father Arechabala and Father Kiernan, celebrated their first Mass on May 17 at the same church – Mother of Divine Providence in King of Prussia. Two others celebrated in Norristown but at different churches: Father Cardosi at St. Titus and Father Mulligan at Visitation B.V.M.

Father Zaleski is almost certainly the first priest in the history of the Philadelphia Archdiocese to have his own father preach the homily at his first Mass. His dad, Deacon Stanley Zaleski, is a permanent deacon assigned to St. Martin’s and a retired teacher at Father Judge High School.

As to what he would tell his son in the homily, “I’ll tell him we love him,” Deacon Zaleski said after the ordination Mass. “That is something every priest needs to hear.”

That was certainly the general sentiment of the families and friends who attended the ordination.

“I feel so great, God has given me a great gift,” said Tsadu Mekonnen, the mother of Father Mekonnen.

John Mulligan, the father of Father Mulligan, said his ordination was “a wonderful gift from God. I hope he is setting the example for more young or older men to become priests.” 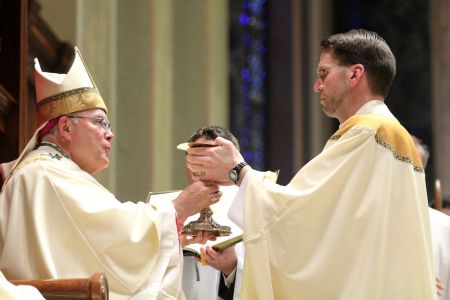 Father Joseph Zaleski receives the chalice and paten from the archbishop during the rite. (Sarah Webb)

Christians really have two sets of parents, and in Father Gibbs’ case, his godmother, Diana Stricker, was at the ordination and ecstatic.

“I’m so happy and thrilled,” she said. “Alex is going to be a wonderful priest because he is a wonderful fellow.”

You might say Bishop Timothy Senior was a surrogate parent to the five new priests from St. Charles Seminary, where he has been rector for the past three years.

“We, as bishops and priests, are so inspired by these wonderful men who are giving their lives to Christ,” he said. “It is a great witness to the vitality of the faith here in Philadelphia and this is a wonderful, glorious day.” 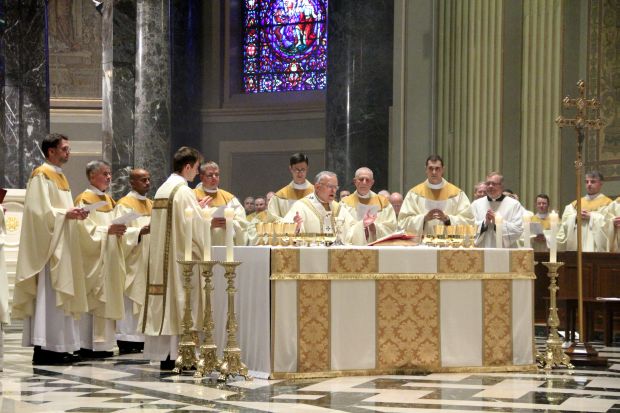 Archbishop Chaput celebrates the Liturgy of the Eucharist with the newly ordained priests concelebrating, May 16 at the Cathedral Basilica of SS. Peter and Paul. (Sarah Webb)

NEXT: New priests tell the tales of how God called, and they answered