Benedictine nuns make their home on the range 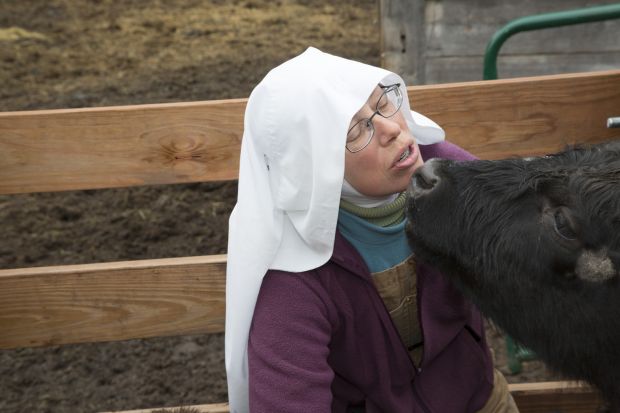 Sister Maria Walburga Schortemeyer, ranch manager, is pictured with a cow on a ranch in late March at the Abbey of St. Walburga in Virginia Dale, Colo. (CNS photo/Jim West)

VIRGINIA DALE, Colo. (CNS) — Sister Maria Walburga Schortemeyer is at home wading through the mud and manure of a barnyard in boots, work pants, a fleece jacket, and her white veil.

Minutes later, in the black-and-white habit of a Benedictine nun, she is equally at home singing psalms and praying the Divine Office in a chapel with other nuns.

Sister Maria Walburga is the ranch manager at the Abbey of St. Walburga in Virginia Dale. The town sits in the arid and isolated foothills of the Rocky Mountains, almost within shouting distance of the Wyoming border.

This community of 24 Benedictine nuns is a semi-cloistered contemplative order. They view their main work as prayer, coming together in the chapel seven times a day. What makes them unusual is their ranch. They raise beef cattle on 250 acres that they own and another 1,500 acres where they have grazing rights.

The abbey was originally established in Boulder in 1935 by Benedictines from Eichstatt, Germany, who fled Adolf Hitler’s growing power. Benedictines have always been associated with agriculture, and the Boulder community established a dairy and grew alfalfa, corn, oats and barley for the cows. When the abbey needed to expand and with Boulder growing into a crowded city, the sisters moved to Virginia Dale in 1997 on land donated by a Denver couple.

As they moved, the sisters changed from raising dairy cattle to beef. They keep 40 female cows and a few bulls and steers. Calves stay until they are ready for slaughter at 2 years old. The cows all have names, which Sister Maria Walburga maintains is not an issue when it’s time for slaughter. The processing is contracted out to a commercial operation. 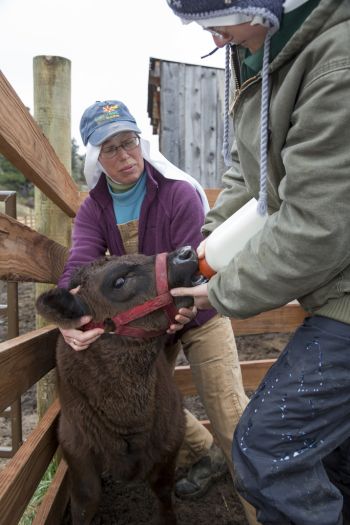 Sister Maria Walburga Schortemeyer and Sister Maria Gertrude, try to convince a calf named Cracker Jack to drink milk from a bottle on a ranch in late March at the Abbey of St. Walburga in Virginia Dale, Colo. (CNS photo/Jim West)

St. Benedict said to treat everything “as vessels of the altar,” she explained in an interview for Catholic News Service. The nuns treat the animals with reverence, she said, but that doesn’t mean they can’t be consumed. “We feel God gave them for the use of man.”

Treating the animals with reverence, said Mother Maria Michael Newe, the abbess, means not “pumping in hormones and things of that nature to make them be more than they are supposed to be, and just for the pure purpose of using them for money.”

The abbey’s beef is in such demand that it can only be purchased when an existing client drops off the customer list.

Besides cattle and chickens, the sisters also keep bees, raise water buffalo and a few llamas, and have five cats. The llamas guard the cattle from mountain lions.

It is not a life for slackers. The sisters’ day is governed by the Benedictine philosophy of “ora et labora,” or “pray and work.”

“Idleness is the work of the devil, in a sense, so we fill our lives with working on God’s land and managing what he has given to us,” said Mother Maria Michael. The sisters wake at 4:20 every morning for prayer, Scripture, more prayer, and Mass before breakfast, which is eaten in silence. Throughout the day work on the ranch, in the kitchen and elsewhere is interspersed with prayer before the day ends at 7:30 p.m.

On a recent morning, Sister Maria Walburga and Sister Maria Gertrude Reed were trying hard to convince a calf, Cracker Jack, to drink from a bottle. Cracker Jack had to be weaned early, but did not seem to understand the concept of milk arriving in a bottle. Before they were finished, there may have been as much milk on the sisters as in the calf.

Other chores that morning included handling a grumpy cow who did not want to be milked — the abbey milks one or two cows to make cheese — as well as gathering eggs from the henhouse, ordering medicine for a cow with foot rot, and hauling a salt lick to a pasture.

The abbey also maintains a retreat house for individuals and groups who wish to spend one or more days in prayer and contemplation. Participants are allowed to roam much of the abbey’s land, and can hike a Stations of the Cross trail that overlooks the valley.

Sister Maria Walburga said she finds the concept of solidarity an appealing reason for the work the sisters do.

“The majority of people in the world, including Third World countries, do some kind of agriculture to support themselves,” she explained. “Our prayer (is) in sync with what so many people are doing just to survive.”

NEXT: ‘Inequality of opportunity’ termed a root cause of societal decline