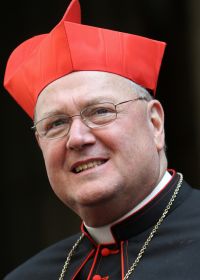 NEW YORK (CNS) — Catholics and Jews risk losing their hard-won interfaith amity if they take ecumenism for granted and fail to pass it along to a new generation of seminarians and laity, Cardinal Timothy M. Dolan of New York said in an address at the Jewish Theological Seminary of America.

The cardinal spoke May 6 about 50 years of substantive interactions that began with “Nostra Aetate” (“In Our Time”), the Second Vatican Council’s declaration on relations with non-Christian religions promulgated by Blessed Paul VI in 1965.

He told the audience at the annual John Paul II Center Lecture for Interreligious Understanding that St. John Paul II realized the dream of Nostra Aetate by trusting the Jewish community enough to invite it to become an ally in “the number one priority of his pontificate, to recover the primacy of the spiritual.”

The late pope believed, Cardinal Dolan said, “the most mortal toxin affecting the human project was the denial of God’s sovereignty, even his existence.” St. John Paul believed the Jews were the church’s most natural ally and shared his sense of urgency, he said.

As a young man in Poland, Karol Wojtyla, the future pope, “lost everything by the time he was in his early 20s,” and mourned the wartime disappearance of friends and the enforced absence of God from the country’s public expression, Cardinal Dolan explained. Catholics and Jews survived the World War II and postwar communism by relying on the wisdom of the psalms, specifically, “Only in God is my soul at rest,” he said.

“John Paul II saw today’s children of Abraham, Isaac, Joseph, Moses, David and the prophets as essential to recovery of the primacy of the divine in a world drugged to forget its Lord,” the cardinal said.

“Nostra Aetate tells us that all of us comprise a single community and have a single origin” and share a single goal, which is a union with God, he said.

Catholics and Jews have in common, he continued, an understanding of the dignity of the human person, the sanctity of every human life, an allegiance to God’s law, a solidarity and a mutual world view. “Human dignity in life is enhanced, not shackled, when we proclaim, ‘We want God,'” as crowds did during St. John Paul’s first visit to Poland after he became pope, the cardinal added.

Nostra Aetate inspired St. John Paul, Cardinal Dolan said, not just to tolerate Jews or have theological discussions with them, but to invite a “providential and urgent partnership flowing from a mutual faith, love and biblical roots, where Jews become like their prophets of old and Catholics like the Twelve Apostles, calling the world away from the worship of false gods, false idols, into the arms of the one true, eternal God who persistently and passionately loves us.”

In remarks to the audience, Arnold M. Eisen, Jewish Theological Seminary chancellor, said at a time when some use religion as a justification for killing others, Nostra Aetate and the seminary continue to demand that “religious voices in service of interreligious respect have a responsibility to be as loud and persistent as those that seek to drown out this commitment with bombs or bullets.”

Citing 20th-century Rabbi Abraham Joshua Heschel, Eisen said Jews and Christians need one another to face the challenges and expectations of a living God.

Such good relations between Catholics and Jews would not have been possible before the release of Nostra Aetate, Cardinal Dolan said, yet most Catholics do not remember that time. He said bishops and others worry that seminarians, for example, raised in a climate where “ecumenism and interfaith cooperation was taken for granted,” may think “you don’t have to work at it because it’s just there and it’s going to stay.”

“But we all know the hard way. If it’s not something you constantly work at and constantly remind yourself of, it will quickly dissipate.”

A strong effort to maintain good relations is “particularly incumbent on Catholics and Jews in the United States, because we live in a laboratory of ecumenical and interfaith amity. We really take it for granted and we know it works,” Cardinal Dolan said.

He said Pope Benedict XVI in particular insisted that the letter and spirit of Nostra Aetate be included both in catechetical materials for laypeople and seminary studies.

Cardinal Dolan also said Pope Francis is eager to learn about Americans during his upcoming visit but is a “little nervous” because he has never been to the U.S. and is “very shy about not knowing conversational English.”

He said a substantive interreligious meeting will be a high point of the pope’s time in New York, and that the pope told him and Archbishop Bernardito Auza, the Vatican’s permanent representative to the United Nations, such a visit would be an essential element of his trip.

The lecture was sponsored by the John Paul II Center for Interreligious Dialogue at the Pontifical University of St. Thomas Aquinas in Rome, the Russell Berrie Foundation and the Jewish Theological Seminary of America.

NEXT: Texas governor: Response to prayer after accident made him stronger