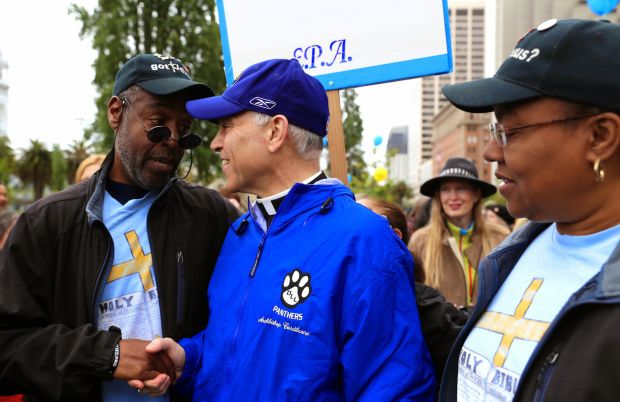 SAN FRANCISCO (CNS) — More than 500 people gathered for a family picnic at a San Francisco park May 16 to show support for Archbishop Salvatore J. Cordileone, who has faced a barrage of criticism from some Catholics, civic leaders and the media over proposed morality clauses for Catholic school teacher contracts and other policies.

“The Catholic Church has been under a coordinated attack from the power structure of San Francisco for at least the last 10 years,” said Eva Muntean, who helped organize a group called San Francisco Catholics, which sponsored the event at the city’s Sue Bierman Park.

“The attack has come to a head with the efforts of Archbishop Cordileone to ensure fidelity to the faith in his Catholic high schools under his jurisdiction,” she told Catholic News Service in a May 18 email.

Muntean is co-chair of the annual Walk for Life West Coast, the largest pro-life gathering on the West Coast. Held in San Francisco since 2005, the walk has grown from 7,000 participants to more than 50,000.

“When people calling themselves Catholic, teachers, students and parents of students attacked the archbishop for nothing more than insisting on fidelity to the church, we knew we had to stand up. Jesus demanded of those who follow him a total commitment,” Muntean told CNS. “The followers of Christ don’t get to pick and choose what revealed truths we will follow based on our opinions of the day.”

The San Francisco Archdiocese is adding detailed statements of Catholic teaching on sexual morality and religious practice to the faculty and staff handbooks of archdiocesan high schools to take effect in the 2015-16 school year. The statements cover church teaching on abortion, same-sex marriage, artificial contraception, and other tenets of the faith.

The handbook and contract changes reiterate more strongly what archdiocesan officials say is the responsibility of teachers and staff not to contradict Catholic teaching in school and in their public lives.

The Catholic Church upholds the traditional definition of marriage between one man and one woman and says that any sexual activity outside of marriage is sinful. The church also teaches that homosexual attraction itself is not sinful and that homosexual people “must be accepted with respect, compassion and sensitivity.”

The Chronicle ad that appeared April 16 was signed by more than 100 local Catholics and took the form of an open letter to Pope Francis, asking him to replace the archbishop with “a leader true to our values and your namesake.”

The letter claimed the archbishop has “fostered an atmosphere of division and intolerance,” saying he “coerces educators and staff of our Catholic high schools to accept a morality code which violates individual consciences as well as California labor laws.”

In response, the San Francisco Archdiocese called the ad “a misrepresentation of Catholic teaching.”

Muntean told CNS that Archbishop Cordileone, Pope Francis “and the entire church have to know that faithful Catholics are behind him, support him and are ready to go to the mat for him. … (We) are saying that Catholic schools must teach in accordance with the Catholic Church.”

She added, “As many have pointed out, the whole church in America is watching what is happening here.”

NEXT: ‘Positio’ for Father Peyton’s cause now with Vatican congregation